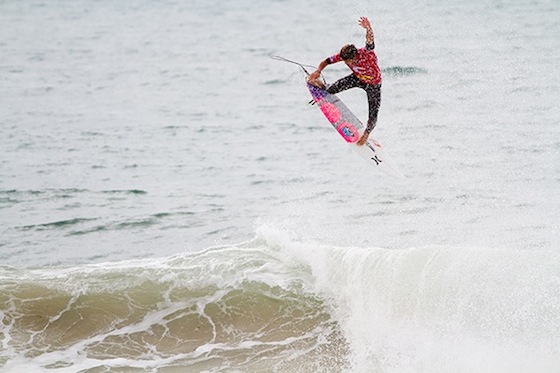 Event No. 9 of 10 on the ASP World Championship Tour (WCT), the Rip Curl Pro Portugal presented by Moche plays a vital role in the World Title Race and could potentially crown an ASP World Champion at Supertubos.

Julian Wilson (AUS), 24, struggled to find a rhythm in the opening half of his Round 3 bout against Damien Hobgood (USA), 34, but eventually launched into one of the highest alley-oops ever witnessed in the history of professional surfing. The incredible display by Wilson would earn the Australian the first perfect 10 point ride of the event.

“I felt like I bit off a bit more than I could chew when I was in the air on that one, but somehow I pulled it, that section was really really good,” an ecstatic Wilson said. “At that point of the heat I was really quite nervous, I only had one opportunity to do an air, and I was lucky enough to capitalize on it.”

Following the perfect score, Wilson continued to go for broke, driving through a beautiful backside barrel to secure the heat lead and eventual win over Hobgood.

“That’s the thing I love about competition, you put yourself in those situations where you don’t even for a second think about not making it,” Wilson continued. “In a freesurf I probably would have pulled the eject button like halfway through that air, that was for sure the biggest alley-oop I’ve ever done.”

John John Florence (HAW), 20, current ASP World No. 14, would follow up Wilson’s aerial performance by launching his own above-the-lip attack in his win over dangerous rookie Filipe Toledo (BRA), 18. Florence built speed on a long running righthander and lofted a full-rotation frontside air, scoring a 9.07 out of 10 for the maneuver.

“I was really nervous going into this heat with Filipe (Toledo), he’s really scary especially with this wind,” Florence admitted. “I kind of had airs on my mind and tried a couple that I didn’t pull together, then I got that one and I’m stoked I landed it.”

Mick Fanning (AUS), 32, reaffirmed his leader position on the ASP World Title Race while easily advancing ahead of event wildcard Jacob Willcox (AUS), 16. Applying pressure on the young Western-Australian with two solid scores at the start, Fanning controlled the 30 minute exchange from start to finish.

“I guess with anyone you want to put them under pressure early and make them try that little bit harder,” Fanning said. “I was just lucky, he went for the lefts, I was concentrating on the rights and I got two scores and then I was just trying to better some scores and see what else was out there.”

Joel Parkinson (AUS), 32, reigning ASP World Champion and current No. 5, found himself in need of a score in the dying seconds of his Round 3 match-up with Alejo Muniz (BRA), 23. However, Parkinson would find a big righthander on the buzzer, unloading a powerful carve to collect the heat-winning ride.

“It was a scratchy heat, battling for fives and sixes and it’s been a lot of heats like that in the last couple of events,” Parkinson said. “It’s a super long shot for me in the World Title race, you don’t want to pray for Mick (Fanning) to lose, and I’d have to have two wins or something, I just really hope it goes down to Pipe for me.”

Miguel Pupo (BRA), 21, got off to an early start in his round 2 match-up against Brett Simpson (USA), 28, launching into a huge no-grab backside full rotation to net an excellent 8.93 out of 10 and an eventual win over the American.

“Yesterday I tried a lot of airs and didn’t make any because I broke my ankle doing that maneuver and I’ve had trouble doing them since,” Pupo explained. “I knew that wave was a closeout so I guess I’m lucky I pulled it off in the heat. Brett (Simpson) and I are in a tough situation on the rankings, we both knew we really needed to make that heat, that’s probably why it had such high scores.”

Pupo’s tear would continue in Round 3 when he went on to defeat ASP World No.7, Michel Bourez (PYF), 27, with a mix barrel rides and powerful turns.

“I was just talking to my Dad before my heat and he said, there are lefts down there if you want to surf them, and I was out there pretty much by myself and choosing the right waves,” Pupo said. “I knew Michel (Bourez) was only needing a 7 so I was sitting on him and with two minutes to go that wave came, I had a fun barrel and I’m stoked.”

Contest officials at the Rip Curl Pro Portugal will reconvene tomorrow morning at 7:45am for a potential 8am start.

Up first when competition recommences will be Joel Parkinson (AUS), Kai Otton (AUS) and Julian Wilson (AUS) in the first non-elimination Round 4 heat.

The Rip Curl Pro Portugal will be webcast LIVE via www.live.ripcurl.com