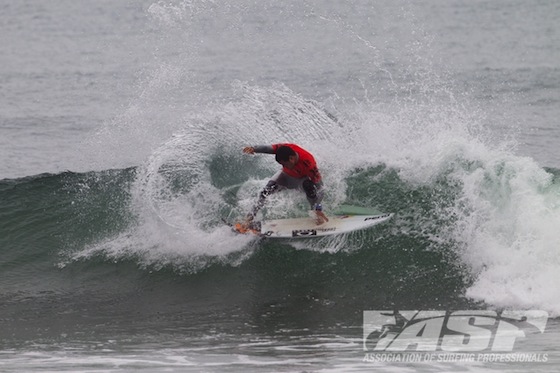 Stop No. 7 of 10 on the 2013 ASP World Championship Tour (WCT), the Hurley Pro at Trestles brings the world’s best surfers to one of the planet’s most high-performance venues for a week of barrier-breaking surfing and dramatic competition.

Julian Wilson (AUS), 24, led the day’s proceedings with a hard-fought Round 1 win, featuring a flurry of high-scoring exchanges from fellow competitors Miguel Pupo (BRA), 21, and John John Florence (HAW) 20. Wilson was deadly on both the lefts and rights, unloading an impressive repertoire of airs and turns to secure an excellent 17.40 out of 20 total and a Round 3 berth.

“That heat felt good and I knew it was going to be a hard heat,” Wilson said. “When I saw the ratings after Tahiti I knew I’d have a Round 1 rematch from the last event. I’d been thinking about it for the last couple of weeks and it was a good heat to win. Miguel (Pupo) started really strong and then a couple of good waves came. I got a good score on that left that gave me a couple of sections to hit and then I had the right.”

Wilson has been building momentum throughout the 2013 season, earning Quarterfinals berths in the last two events. Following his standout performance in Round 1 at the Hurley Pro at Trestles, the Australian hopes to carry his success into the back half of the season.

“I’ve got some momentum going now and I’ve been traveling with my girlfriend and best mate and things are feeling really comfortable again,” Wilson said. “I’m focusing on my surfing and my equipment and once I start to do that everything falls in to place. I’m in a good head space and the waves are always fun here so hopefully the swell sticks around for a few more days.”

Jordy Smith (ZAF), 25, current ASP WCT No. 4, dominated his Round 1 bout from start to finish, besting dangerous goofy-footer Matt Wilkinson (AUS), 25, and wildcard Mitch Crews (AUS), 23, with a seamless combination of power and progression on the Lowers set waves.

“Mitch (Crews) and Wilko (Matt Wilkinson) can pull off anything at anytime and I had the curse of the 7s, but I had a fun surf,” Smith said. “I was pretty bummed because my leash plug pulled out on this little left, but luckily my board didn’t go all the way to shore. I lucked in to a couple of sets though and I had a good time. It doesn’t look like we have a ton of waves coming our way, but what we have today is really fun and contestable.”

Michel Bourez (PYF), 27, displayed his patented power-surfing on the righthanders of Lowers while securing a solid Round 1 win over Damien Hobgood (USA), 34, and Kai Otton (AUS), 33. Following a disappointing equal 25th result at his home event at Teahupo’o, Bourez is hungry to post a result at the Hurley Pro at Trestles.

“Personally, I need a result here because I didn’t do well in Tahiti,” Bourez said. “I still bummed about it, so for me a Quarterfinals result would be minimum. Happy to get that Round 1 win and hopefully I can keep going.”

“You can’t spare anything out there,” Fanning said. “Kolohe (Andino) and I have been on the same time zone in free surfs before this event and he’s been ripping. Every time I’ve seen him catch a wave he’s frothing and it was a good heat. He started off really strong and I was just lucky to find that last one.”

Gabriel Medina (BRA), 19, current ASP WCT No. 18, put together a banner performance to take a Round 1 win at the Hurley Pro at Trestles. Medina, a former winner at the venue during an ASP Prime event, has suffered four Round 3 exits in 2013 and is hungry to post a standout result in an attempt to build momentum entering the back half of the season.

“I just want make heats because I’ve been losing in Round 3,” Medina said. “I just want to focus on surfing and making heats. This is a good event to build momentum on and I love competing one competition after another. I just feel better when I get ready to compete over and over again and I’m excited thinking about Europe and Hawaii and I love this wave.”

Brett Simpson (USA), 28, current ASP WCT No. 22, kicked off his Hurley Pro at Trestles campaign with a big upset, relegating 11-time ASP World Champion Kelly Slater (USA), 41, and wildcard Dane Reynolds (USA), 28, to Round 2 with deadly backhand combinations on lefts at Lowers while advancing to Round 3.

“I’m stoked, it was a gnarly heat but I was just trying to do my own thing because Kelly (Slater) and Dane (Reynolds) were going to do what they do,” Simpson said. “I was just excited for that heat and I knew that was a heat I could win because I surf a lot more freely when maybe it’s a heat I’m not supposed to win. I just focused on myself and with all my family down here, it’s a big win. Anytime you beat Slater, whether it’s man-on-man or three-man, it’s a big win.”

While both Kelly Slater and reigning ASP World Champion Joel Parkinson (AUS), 32, would fail to advance out of Round 1, both would rebound in their Round 2 afternoon match ups.

Slater, defending Hurley Pro at Trestles champion, would take on progressive wizard Dane Reynolds in their Round 2 affair and would get the best of the Californian in a wave-starved heat.

“That was really slow and it was too bad I had to draw Dane in Round 2,” Slater said. “Unfortunately he just didn’t get the waves and didn’t get going. I was pretty confident that I’d have to surf against him being a low seed, but it’s just unfortunate that it was a slow heat.”

Slater, current ASP World No. 1, admitted that his Round 2 Hurley Pro at Trestles victory was a crucial result towards a potential 12th ASP World Title.

“There was definitely a bit of pressure in that heat because Mick (Fanning) has good results and Joel (Parkinson) has a few bad results,” Slater said. “I also don’t have anything to throw away and Mick has all keepers. Also, Jordy (Smith) is every bit in this race so it was important to me to get out of that one.”

Parkinson would rebound from his Round 1 loss in fantastic fashion, dominating the Lowers righthanders with polished carves to post a 16.13 heat total, advancing to Round 3 over event wildcard Ian Crane.

“This event always seems to be a bit of a momentum builder going in to the back half of the year,” Parkinson said. “The guys that go on to make finals here always seem to do well. You definitely don’t want to lose in Round 2 here so I’m happy to get a couple of good waves out there.”

Adriano de Souza (BRA), 26, would punctuate an exciting day of competition, belting both the day’s high single-wave score of 9.73 and the high heat-total of 18.83 for searing forehand turns on a steep Lowers walls, ousting wildcard Mitch Crews (AUS), 23.

“This event is really important to me and last year I got third,” De Souza said. “That first round was a bummer and I knew in that round Mitch Crews would be hard to beat and I put everything in to it and got good scores. The last two or three events I’ve been out of rhythm, so I’m hoping for a good result here.”

For additional ASP information log on to www.aspworldtour.com or www.aspnorthamerica.org