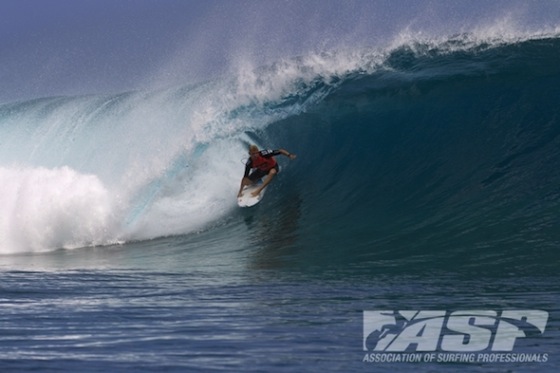 TEAHUPO’O, Tahiti (Wednesday, August 14, 2013) – The world’s best surfers will resume this season’s hunt for the Association of Surfing Professionals (ASP) World Title this week at Stop No. 6 of 10 on the 2013 ASP World Championship Tour (WCT), the Billabong Pro Tahiti, held at the world-famous, lefthand reed pass of Teahupo’o from August 15 – 26.

Commencing the second half of the 2013 ASP WCT season, the Billabong Pro Tahiti will reignite this year’s battle for surfing supremacy and two-time ASP World Champion (2007, 2009) and defending event winner Mick Fanning (AUS), 32, leads the ASP Top 34 as the current frontrunner.

“Tahiti is a place where I have put a lot of focus on in my career,” Fanning said. “When I first started out on tour, my forehand was definitely stronger than my backhand and I made it a point to come to place like Teahupo’o in my free time to build a stronger backhand tube-riding approach. I’ve had some pretty solid results in Tahiti since and last year’s win was definitely special.”

Kelly Slater (USA), 41, 11-time ASP World Champion and four time Tahiti winner, opened up 2013 with a big win on the Gold Coast and backed it up with a tour de force performance in Fiji, but stumbles at Bells Beach and Bali have the iconic athlete currently trailing Fanning heading into Tahiti.

Joel Parkinson (AUS), 32, reigning ASP World Champion and current ASP WCT No. 3, had an uncharacteristic slow start to the 2013 season, but rebounded in fantastic form with a win at the previous event in Bali. Runner-up to stablemate Fanning in the last year’s Billabong Pro Tahiti, the champ is hungry to improve upon the result in the coming weeks.

“When I look back at last year’s Teahupo’o event, it kills me,” Parkinson said. “I felt like I did everything right that I needed to do and it just crushed me to come so close and get second. My one goal moving ahead is to win Teahupo’o.”

Surfline, official forecasters for the Billabong Pro Tahiti, are calling for:

A modest, mid period SW swell will build in Thursday before easing slowly on Friday. A smaller SW swell is possible for Sunday, with a series of small to modest SW to S swells possible for the last few days of the waiting period.

The two event wildcards as determined by the Trials are are Alain Riou (PYF) and Anthony Walsh (AUS).

The two ASP Replacements due to event withdrawals are Patrick Gudauskas (USA) and Yadin Nicol (AUS).

Selection for the event wildcards and replacements was based on the Trials’ results.

The Billabong Pro Tahiti will be webcast LIVE via www.billabongpro.com