Reigning WSL Champion Gabriel Medina (BRA) faced trials winner and dangerous local Jay Davies (AUS). Davies came out firing, posting a 6.67 for a deep barrel to take the lead. Medina was able to come back with a 6.67 of his own and edge the lead but the Australian answered back with an excellent 8.50 for deep pit, coming out with the foamball. Medina was left hunting the lineup but his wave in the final moments wasn’t enough and the World Champion is eliminated while the wildcard moves on to Round 3 where he will face Mick Fanning (AUS).

“I’m feeling super stoked,” Davies said. “It’s a beautiful day in West Oz and I get to surf against some of my idols. I watched Gabriel (Medina) win the World Title last year and I was pumped to get the chance to surf against him at one of the best waves in the world. I get to surf here all the time so hopefully that will help me get through some more rounds. It’s so beautiful out there right now, we had shark cruise through the lineup which was a little sketchy, but it was only a baby one eating some fish. Thanks again to all my friends and family for all their support.” 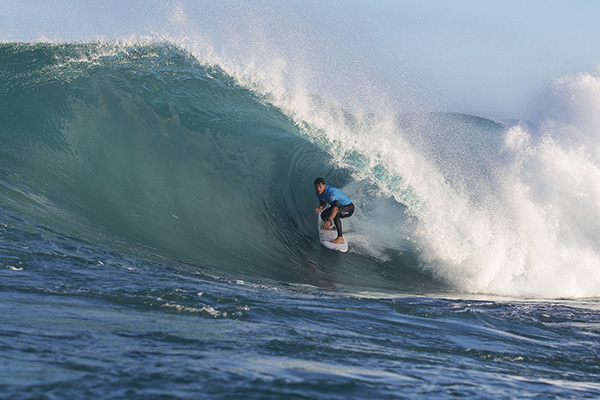 Rookie Ricardo Christie (NZL) secured his first CT heat win today defeating in-form surfer Filipe Toledo (BRA) in challenging conditions. The lead went back and forth between the pair through the 30-minute bout. Christie took the top spot with five minutes remaining thanks to a 13.26 heat total. In the dying seconds Toledo answered back needing a 5.67 but didn’t get the score and is eliminated from competition, leaving the rookie to take the heat win and a place in Round 3.

“I feel like I’ve just won the competition,” said Christie. “It’s been a tough start to the year for me and it’s pretty sick to have an event out here in waves like this. It’s great to beat Filipe (Toledo) there’s been a lot going his way this year and it’s been going the opposite for me. I would have been spewing if they gave him the score on that last one, it was a pretty small wave. I had a bit of trouble yesterday and I got pumped. I didn’t know where to sit but I’ve kind of figured it out a bit more today. I watched John John (Florence) and Josh Kerr this morning taking off and thought that’s what I have to do.”

“I missed one or two waves on the set before,” Toledo said. “The last wave was too small, which is why I don’t think I got the score. I’m really happy though, it’s my birthday today so I’m relaxing and getting ready for the next event at Lower Trestles and then I go to Brazil.” 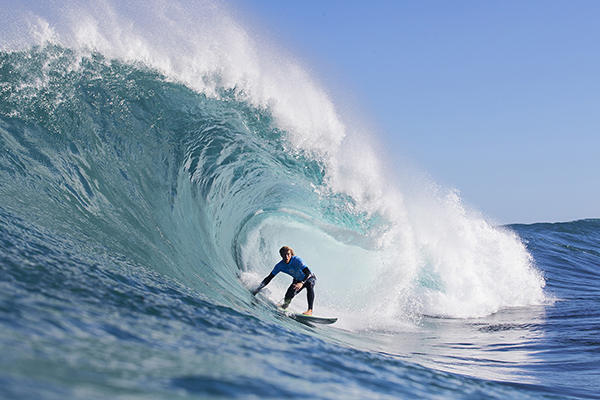 The performance of the day came from a stacked heat between Owen Wright (AUS) and Dusty Payne (HAW) in Round 2 today. Wright posted the first big score on his backhand, an 8.50, and the Hawaiian came back with an 8.40, putting him back in contention. Wright stamped his authority on the heat with a Perfect 10 for the biggest wave of the day and a huge, deep barrel.

“I’ve never surfed out here before and this was my first time in the lineup,” said Wright. “The set came so I just went. After my ten I remember going, ‘give me more’. I just love it and I love waves like this. When that wave came through I managed to get in the right spot and it let me in perfectly, the wave did the rest from there.”

An all Brazilian match-up between Adriano de Souza (BRA) and wildcard Alejo Muniz (BRA) got off to a slow start. De Souza opening his account by taking a free-fall drop over the ledge, putting everything on the line, and was spat out at the end. His total commitment was rewarded with a near-perfect 9.80. Despite a 7.50 for Muniz he wasn’t able to overcome his opponent and is eliminated from the competition.

“I tried to be as deep as I could on that 9.80,” said De Souza. “I had to be smart the whole time and when that wave popped up I was in the right place at the right time. I’m so happy to make that thing, it was gnarly and the wave was three-times overhead. I put things on the line and I made the barrel. I’m not completely happy because I was competing against a friend and Alejo came so far to compete at this event and do his best and I would have like to see him do well.”
Local favorite and former finalist at Margaret River Taj Burrow (AUS) defeated Brett Simpson (USA) to advance through to Round 3. Despite a broken board Burrow’s 13.67 heat total was enough to secure the win and the American is eliminated in equal 25th place.

“There’s some pretty wild waves out there today,” Burrow said. “I got a medium one, perhaps a wave I wouldn’t normally take in a free surf, I was pumping through it pretty deep and hit bump and my board broke straight away. It’s a pretty good day out here, but in a heat you can’t be as selective and you just have to go.”

The excellent conditions look set to continue and Surfline, official forecaster for the WSL, are calling for:

Very solid SW groundswell will continue on Thursday, easing through Friday. Another exceptionally strong SSW groundswell is on track for Saturday, and could be even larger than the surf for Wed/Thur. Sunday will see dropping surf, with a further drop in surf on Monday. Morning wind conditions look favorable for the next few days, with some periods of side or onshore flow in the afternoons. Going further out, another strong SW swell looks possible around Wednesday the 22nd.