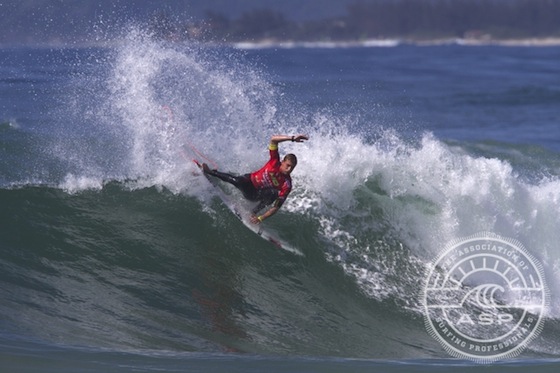 Pictured: Matt Banting (AUS), 19, would lead the Australian camp with a commanding Round 1 victory at the HD World Junior Championships.

Vasco Ribeiro (PRT), 18, immediately found his rhythm despite challenging morning conditions in the day’s first heat, combining a selective wave strategy with surgical execution to notch an 8.00 and 9.00 via powerful combinations. The day’s high heat-total of 17.00 would see the Portuguese talent advance directly to Round 3 and Ribeiro was relieved to have a successful start to his ASP World Junior Championships campaign.

“It felt good to get off to a good start because I knew it’d be tough out there,” Ribeiro said. “I knew I had to be patient and luckily I found three good waves that gave me some scoring potential. I’m happy I was able to skip that Round 2 and hopefully I can carry my momentum on to the next round.”

Carlos Munoz (CRI), 20, was another top seed to unload searing combinations while posting a commanding Round 1 victory. While the Costa Rican has recently been in the spotlight for his aerial attack, today’s excellent 16.70 out of 20 heat total was earned with an impressive display of powerful turns.

“It was really hard out there and I’m happy I was able to find the good ones,” Munoz said. “I’ve been watching the contest this morning and I saw Jesse Mendes and Vasco Ribeiro put down two powerful turns and get and 8, so I was trying to do that. I’m happy to skip that round and get some rest.”

Munoz, who enters the HD World Junior Championships fresh off of a career-high equal 3rd place finish at the ASP Prime event in Portugal, hopes to carry the momentum from his recent success to his Brazilian World Junior campaign.

“It’s amazing for me to make that heat because I’m coming off of Portugal, where I just had a solid result,” Munoz said. “It feels good to keep the momentum going, I’m so happy!”

“I saw the heat changed a couple of days ago with Caio (Ibelli) coming in as a wildcard and I knew it’d be a tough heat,” Banting said. “It was a tough heat with tough conditions, so I’m stoked to get that one. I’m stoked to be back here in Brazil and I love these junior contests.”

Gabriel Medina (BRA), 18, got off to a slow start during his opening showing at the HD World Junior Championships, but eventually detonated electric two-turn combinations on both his forehand and backhand to secure a Round 3 berth.

“That was a tough heat because the waves are breaking everywhere,” Medina said. “I tried to get two good ones, but I’m just stoked to make this first heat.”

Medina, the lone ASP WCT surfer in the Men’s 2013 HD World Junior Championships, admitted there will be plenty of tough challenges ahead despite his experience among the ASP Top 34 and is hungry to claim a maiden ASP World Junior Title.

“This is a hard competition as well,” Medina said. “Everyone is surfing good and I just need to stick to my own game plan and also use some of the experience that I’ve learned on the tour. This comp means a lot to me because I’ve never had a World Junior Title. It’d be amazing to win this event and it’s really important. It’s also really tough. Everyone is ripping and I’m just trying to focus.”

Jesse Mendes (BRA), 20, was another Brazilian who opened his HD World Junior Championships campaign with a strong start. Mendes traveled directly to the contest site following a flight from Portugal and made a seamless transition to the Joaquina Beachbreak despite being forced to surf on foreign equipment.

“It was a tough heat,” Mendes said. “I just landed off of the flight from Portugal and had to rush here. I didn’t get my boards or anything and my coach brought me this board from my house to use. I’d never ridden it. It felt like one of those days where everything was going wrong, but I paddled out and got a 7 right away. It just started working out and I did what I had to do. I’m happy to be in the water though and surfing this junior event here.”

Mendes is one of many Brazilians in the 2013 ASP World Junior Championships draw that dreams of claiming the prestigious title in front of the supportive local crowd.

Keanu Asing (HAW), 20, was another competitor who traveled directly from Portugal to Brazil and would also go on to dominate his Round 1 heat. The dedicated Hawaiian would take to his backhand en route to the victory, dismantling the Joaquina Beach lineup with committed turns.

“I just came in last night and am trying to adapt to how the waves are going to be,” Asing said. “It’s tricky and a lot of events have been like this this year, where it’s big and funky and you have to hold on. It was really tough, but if you can manage to do a couple of big turns and hang on you can get the win. I was looking to have fun and get the job done.”

Asing, current No. 65 on the Men’s ASP World Ranking, has been gaining priceless experience while taking on veterans in the ASP Prime events and hopes to put that knowledge to good use at this year’s ASP World Junior Championships.

“This year I’ve been doing all of the Primes and surfing against older guys that have a lot more knowledge,” Asing said. “I try and take what I learn there and be a student of the game. I try and use it where I can. I’m just trying to surf and compete and do my best.”

While the majority of Round 1 victories were earned by the event’s top seeds, young American Kanoa Igarashi (USA), 16, would take out a big win, besting top seed Ramzi Boukhiam (MAR), 20, and trialist Tales Araujo (BRA) with a come-from-behind win.

“I was happy to get that one wave and link that wave together and get the 8.77,” Igarashi said. “I remember looking at the draw and seeing that Ramzi (Boukhiam) was top seed. He’s one of the best junior surfers and I knew he was going to be really gnarly in four-to-five foot rights. He’s one of my favorite surfers, so I’m really psyched to make that heat.”

Slade Prestwich (ZAF), 18, would punctuate the day’s affairs, belting the sets of Joaquina Beach on both his forehand and backhand to lead the South African contingent. While Pretwich was admittedly hunting the lefts on offer, he would kick-start his successful heat with a steep righthander and would dominate the affair from start to finish.

“I saw waves coming in off of that far rock and no one was really surfing there,” Prestwich said. “The paddle is so hard to get back out that I thought I’d sit on the rock and try and get some. Randomly, that set right came through which was my first 8. All I had to do then was wait for that left that I’d been seeing off of the rock.”

Event organizers will reconvene tomorrow morning at 7:30am local time for a possible return to Men’s or Women’s HD World Junior Championships competition.