MARGARET RIVER, Western Australia (Saturday, April 18, 2015) – A thrilling day of action unfolded at the Drug Aware Margaret River Pro, the third stop on the Samsung Galaxy World Surf League (WSL) Championship Tour (CT), as the Semifinalists were decided in large, clean surf at Main Break. The event ran through Men’s Rounds 4, 5 and the Quarterfinals and only four competitors remain in contention for a win in Margaret River.

John John Florence (HAW) became the first Semifinalists today after defeating Jay Davies (AUS) in the Quarterfinals. Davies opened with a 6.17 for an early lead but the Hawaiian looked electric in the large surf at Margaret River, answering with a series of stylish turns for an 8.67 and a lead change. The pair went wave for wave in the closing ten minutes of the heat, with both surfers posting good scores but it was Florence who got the better of the exciting exchange, finding a 9.20 for the win.

“I was so nervous because Jay (Davies) is such a good surfer,” said Florence. “I’ve had the pleasure of surfing against him a few times in the past and especially in these kinds of waves he’s such a strong surfer. So going out there to Main Break like that with those big open rights I was definitely pretty nervous. It took me a couple of waves to get going but it was a really fun heat. I was stoked we were able to get back-to-back waves like that.”

Wildcard Jay Davies (AUS) has had an incredible run of form in the competition, eliminating both Gabriel Medina (BRA) and Mick Fanning (AUS) before taking down Jeremy Flores (FRA) in Round 5 today en route to the Quarterfinals. He goes home with a 5th-place finish at his first CT event.

“I didn’t think I’d make it this far at all,” Davies said. “I was just going to wait and see how I went in the first heat but I guess I got some confidence surfing The Box. I’m pretty stoked with where I ended up and I got to surf against one of my favorite surfers today. It makes me feel very humble to hear the local crowds and be the people’s champion for today. I wish I could have gone further for everyone.”

In a repeat of 2014, Nat Young (USA) and Michel Bourez (PYF) matched-up in the Quarterfinals today. Unlike last year it was the American who came out on top with two seven-point rides, eliminating the defending event winner and securing his place in the Semifinals where he will face Florence. The 5th-place finish for Bourez marks his best result of the year.

“It definitely seems like the swell is picking up a bit,” said Young. “The wind is coming up too so it’s difficult but it’s a pretty awesome day, it couldn’t get much better. Last year Michel (Bourez) and I stayed together and met in the Quarterfinals so it’s great to get him back this year.” 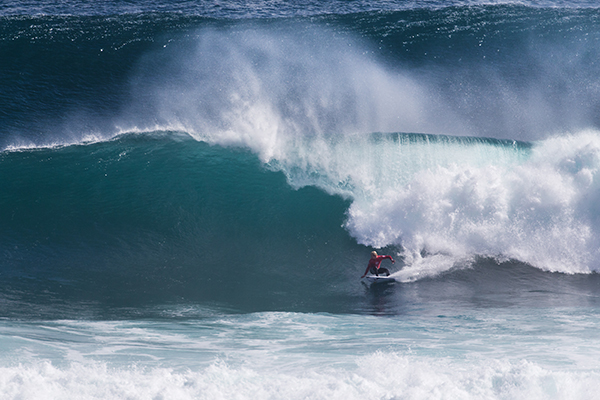 At the halfway point it was Julian Wilson (AUS) that had the edge over local surfer Taj Burrow (AUS) in their Quarterfinal bout. Burrow was left looking for a 6.83 and found a wave with 12 minutes remaining, earning 8.17 and the advantage. He went on to back it up with an 8.10 for a convincing lead, leaving Wilson in need of an excellent 9.47, which he was unable to find. Burrow moves through to the Semifinals where he will face Adriano de Souza (BRA). Wilson previously posted the highest heat total of the day, a 19.06 (out of a possible 20), in his Round 5 heat against Owen Wright (AUS).

“I’m so excited to be at this event and into the Semis,” Burrow said. “I’m really proud of this area and to have great waves and weather and have the guys all putting on a show has been unreal. I don’t feel any pressure to perform, it’s the opposite I just go out to surf good waves and have fun and if the results come then that’s just a bonus.” 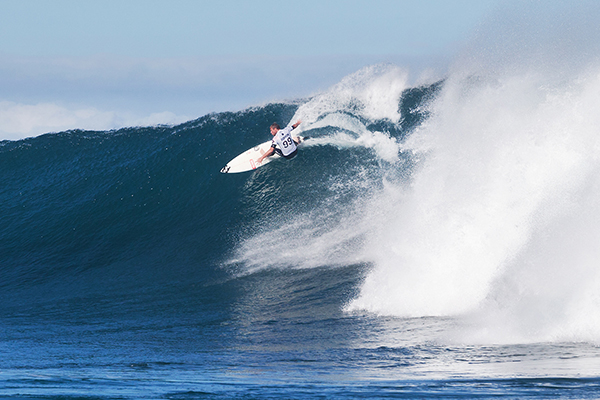 Kelly Slater (USA) faced Adriano de Souza (BRA) in the last Quarterfinal of the day. Slater has only got the better of De Souza once since 2010 and was unable to improve on that record today. It was the Brazilian who dominated the lineup for the opening ten minutes with good wave selection, posting a 15.37 two-wave heat total to leave the 11-time World Champion in a combination situation. Slater was forced to change his board at the half-way mark after he broke his previous one when a huge set came through. Despite a solid 7.13 in the final moments from the American, De Souza took the win and his second Semifinal berth of the year.

“I was actually relieved when I saw that huge wave because I knew Kelly (Slater) was out of position, but it was so painful,” said Adriano. “I’m so happy with what’s happened in this contest so far. It’s been wonderful at Main Break and huge at The Box and I’ve survived all these conditions and I’m so happy and proud with what I’ve done so far. I’m going to refill my energy and my focus again ready for the Semifinals because I’m competing against a local. I’m going to try my best in the Semis.”

“I surfed a pretty good one minute at the end, and that was about it,” said Slater. “I really got caught out to sea and I was pretty tired. I was too far out and missed some good waves. I couldn’t tell where I was in the reef and I couldn’t get anything going. I didn’t really get myself in the heat until the very end. Adriano (de Souza) sits on you and gets in your head and he was smart in that heat. I also got caught up in one big one, went over the falls and broke my good board, which didn’t help.” 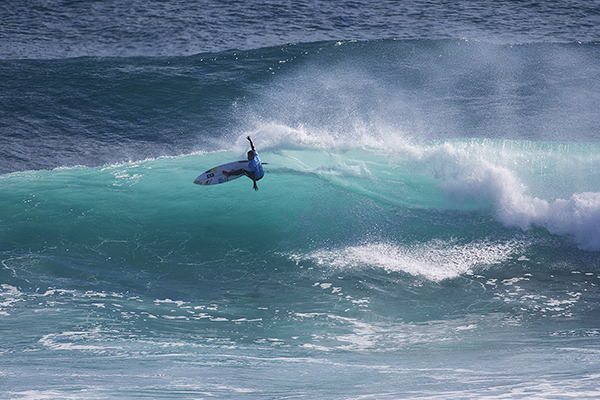