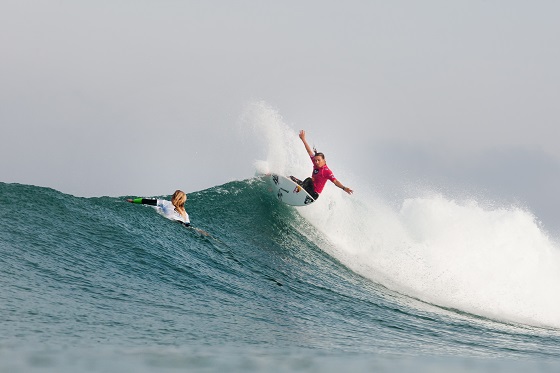 LES ESTAGNOTS, Southwest Coast/France (Monday, September 22, 2014) – The world’s best female surfers have converged on the Southwest Coast of France to contest Stop No. 8 of 10 on the 2014 Samsung Galaxy ASP Women’s World Championship Tour, the Roxy Pro France, from September 23 – 29, 2014.

The Roxy Pro France, held in the idyllic beachbreaks of Hossegor and Seignosse, will recommence this season’s race for the ASP World Title with Sally Fitzgibbons (AUS), Stephanie Gilmore (AUS) and Carissa Moore (HAW) leading the 18-woman field.

Fitzgibbons has been in sterling form this season, posting back-to-back wins in Rio de Janeiro and Fiji as well as a Runner-Up finish at Trestles last week, as she contends for a long-elusive maiden world crown.

“The say the ASP World Title race is a ‘marathon’ and not a ‘sprint’ and that’s definitely proving the case this season,” Fitzgibbons said. “I’m in a good position, but I’d love to put a few more wins on the board before the year is finished. I had a good run here in France last year and I’m looking to repeat this season.”

Gilmore, a five-time ASP Women’s World Champion, kicked off the 2014 season with a big win at home on the Gold Coast and put on a blistering performance last week at Trestles to put her back in the hunt for a sixth title.

“I’m feeling good after the win at Trestles,” Gilmore said. “I think I finally got to surf the way I wanted on quality waves and I think it’s given me a good momentum heading into the last few events of the season. I love France and it looks like we have good surf on the horizon.”

Moore, the reigning two-time ASP Women’s World Champion, opened up the season with a number of impressive finishes including back-to-back wins at Margaret River and the Gold Coast, but has struggled in recent events. The phenomenal Hawaiian will look to realign her 2014 campaign here in France.

“France is my opportunity to rebound,” Moore said. “I really wanted to do well at Trestles, but it didn’t happen for me and I’ve moved on from it. The girls are all surfing really well so I’m looking forward to this event and hopefully we get more good surf.”

Surfline, official forecasters for the Roxy Pro France are calling for:

Fading swell Tuesday. New swell due to fill in through the day Wednesday and continue through the end of the week. Possible reinforcing swell for the weekend 9/27-28.

Event organizers will convene tomorrow morning at 7:30am (local time) to assess conditions and make a call for the day.

When competition commences, up first will be Malia Manuel (HAW), Dimity Stoyle (AUS) and Pauline Ado (FRA) in the opening heat of Round 1.

The Roxy Pro France will be webcast LIVE at ASPWorldTour.com

Running in conjunction with the Roxy Pro France will be Stop No. 9 of 11 on the 2014 Samsung Galaxy ASP World Championship Tour, the Quiksilver Pro France:

The event will be webcast live via www.aspworldtour.com and www.youtube/ASP.