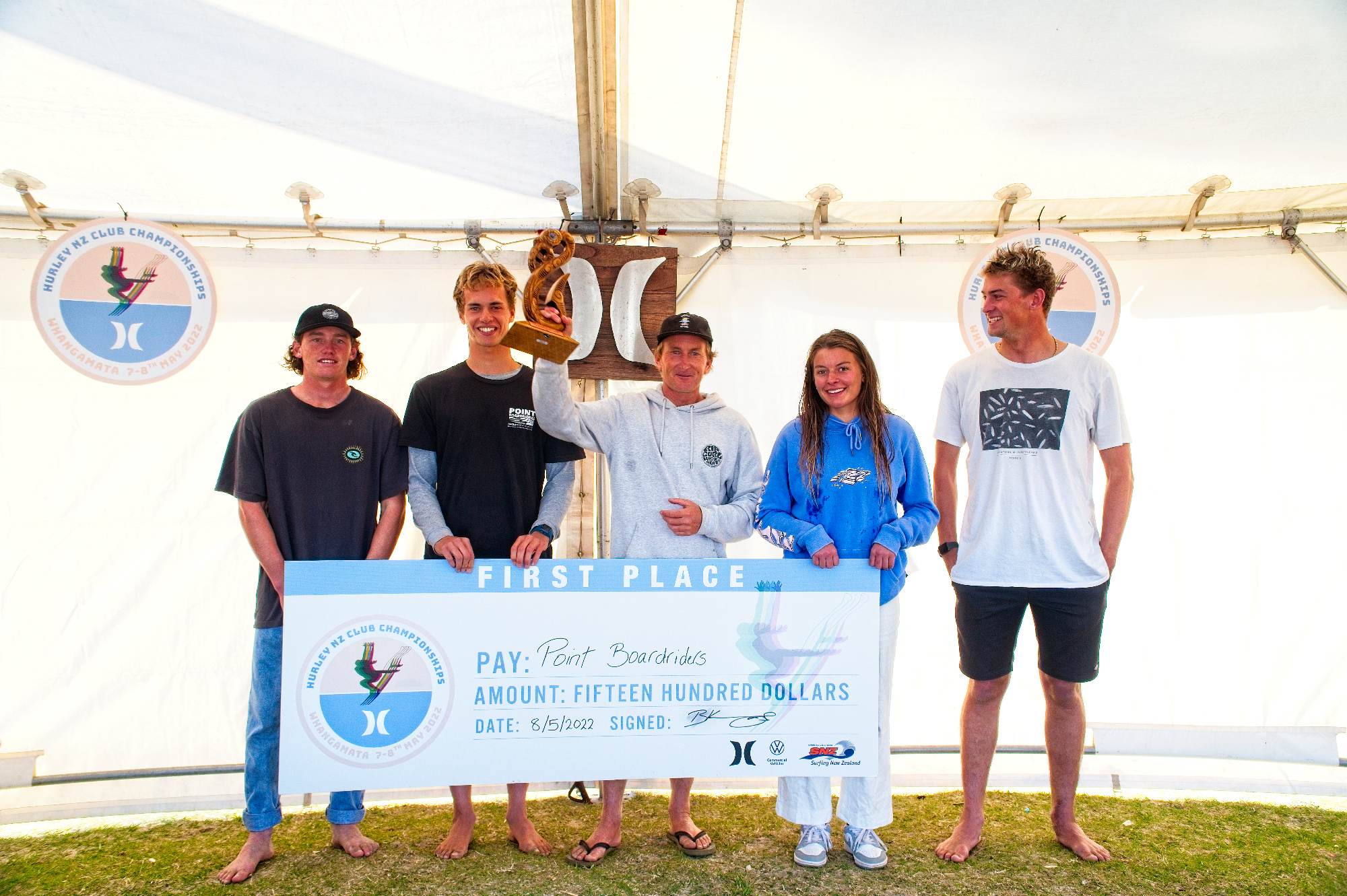 Point Boardriders won the title after claiming the tag team event win which was the last chance for their opponents to steal the show.

They have won the right to be New Zealand’s representative at the Usher Cup to be held on Australia’s Gold Coast in January 2023, the first global team surfing event.

“Wow, we came here to win this weekend but this event has been more than that” commented Larry Fisher.

“This has been the best event that has captured what our club is about, being inclusive of all surfers and working as a team.  That is what our President Luke Hughes has been working towards at home.  We are stoked to win, and we want to represent New Zealand with pride at the Usher Cup next year” he added.

The surf cranked for the final day of the event with the swell remaining in the 1.5m mark with light variable winds.

Taylor Hutchison found himself in a battle with teammate Caleb Cutmore for the Open Men’s Division win.  Both took different approaches to the final and it was Hutchison that surfed to the south that gained ascendency in the final.  Bay Boardriders surfer Jack Hinton finished in third place impressing all weekend in both the team and individual events while Waihi Beaches’ sole finalist Zac Curle, finished in fourth.

Natasha Gouldsbury (New Plymouth) took a win in the Open Women’s Division which kept her club in contention for the overall win.  Gouldsbury surfed to a 12.43 point total in the final to beat fellow Taranaki surfer Ariana Shewry of Oakura Boardriders who finished in second with Bennett in third and Lion Rock’s Gabi Paul in fourth.

Kora Cooper (Rag) nailed the Under 18 Boys Division with his highest single wave score being a 7.23 point ride for a vertical backhand attack.  Cooper is two weeks away from heading to the World Junior Championships being held in El Salvador.  His closest rival will be his teammate at the event, Ta Mouldey.  Mouldey was within striking distance of Cooper for the whole final, finishing with a 12.90 point heat total.  Papamoa Boardriders representative Tava Santorik finished the final in third place with North Coast Boardriders surfer Tai Erceg – Gray finishing in fourth.

Full results can be viewed on Live Heats.

The Hurley New Zealand Boardrider Club Championships toke place at Whangamata on the 7-8 May.  A full field of fourteen teams attended the two-day event with clubs from Northland through to Canterbury participating.

The tag team format is the essence of the Hurley New Zealand Boardrider Club Championships and involves all five surfers in the team going out and catching two waves in succession.  A win in the tag team component of the event is worth 50% of the points up for grabs and ultimately decides the champion club.

The Usher Cup is a recently-developed club event held at Snapper Rocks on the Gold Coast of Australia.  2023 marks the first year that the event will be international with six countries attending as well as 23 clubs from Australia.  The event takes place on the 19th – 22nd January and accommodates teams of four from each club in a standard surfing format for males and females with $7,000 going to the winners of each division.  Other countries attending include France, Indonesia, Japan, Hawaii and USA.

Imagery
High resolution action images of the surfing at the event will be available to media free of charge thanks to New Zealand Surfing Magazine.

Event Hotline
The Surfing New Zealand event hotline is 0211134506.  This will be updated daily at approximately 7am with venue, divisions contested and conditions for the day.

Partners
Generous support from Hurley, Volkswagen, Sky Sport Next and the New Zealand Sports Collective has made the event possible.