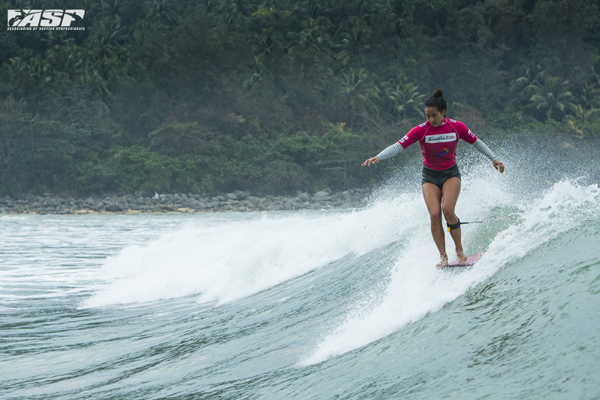 WANNING, Hainan Island, China (Wednesday, November 20, 2013) – The Swatch Girls Pro China hosted by Wanning saw clean 3 to 4 foot left handers running 150 meters down the point at Riyue Bay all day today. All 12 heats of Round 1 and 10 heats of Round 2 were completed with the world’s best female longboarders putting on a show for the first day of the event that will decide the 2013 ASP Women’s World Longboard Champion.

“We are lucky because the surf is really good today,” Dupont said. “I’m happy to make my first heat, I started with a really good wave. I hope I can keep going and that the surf stays good like this all event. It’s a good wave for longboarding, it has sections for both turns and noseriding.”

Crystal Dzigas (HAW) caused one of the day’s only upsets when she defeated Jen Smith (USA), two time ASP Women’s World Longboard champion in Round 1. Dzigas cross-stepped and carved her way directly into Round 3, while Smith was forced into the elimination Round 2 where she faced Rachael Tilly (USA) and won.

“I’m so so happy to make that heat,” said Dzigas. “It was hard to find the good waves and I blew a couple of nice waves and I was nearly in tears thinking I was going to lose again. So to win and beat an amazing surfer like Jen (Smith) feels incredible. It’s also great to have some good waves this year, because last year was really small.”

Karina Rozunko (USA), who finished equal 3rd at last year’s Swatch Girls Pro China, battled through an ankle injury to win her Round 1 heat today over Cristiana Pires (USA), and Margreet Wibbelink (ZAF). Rozunko picked off a pair of runners and posted a couple of scores earning the right to skip Round 2 and advance directly into Round 3.

“I had no anxiety at all because I knew that heat was non-elimination,” Rozunko said. “I just went out there and tried to catch the best waves and it seemed to work in my favour. I’m feeling a little pressure coming back here after surprisingly getting a really good result last year. The pressure is on, I’ll have to step up my game. I haven’t had the best preparation, I sprained my ankle a month ago so I haven’t had a lot of time surfing lately. It’s feeling good now though.”

Chelsea Williams (AUS), last year’s Swatch Girls Pro runner-up and winner of the inaugural event in 2011 continued to impress at Riyue Bay, posting the day’s highest single wave score – 8.75 (out of a possible 10). Williams used her powerful and polished brand of surfing to easily advance directly into Round 3.

“I had lots of fun in that heat which is different because I’m usually nervous,” Williams said. “I got two scores early and then I just went out and did some other stuff and had fun. It’s not often that we get to surf lefts in comps and I feel like it’s a bit of an advantage for me. It’s a little confidence boost getting to skip Round 2 and just get ready for Round 3.”

Kelia Moniz (HAW), reigning ASP Women’s World Longboard Champion was mobbed by crowds of surf fans when she came in from her impressive Round 1 heat win today. Moniz’ style and grace had the crowd and judges hanging on every step, turn and hang 5

“It was my goal to get a good start,” Moniz said. “I tend to fall off a lot so I just wanted to get off to a good start, and luckily I got two good scores early because I think I fell on all my other waves. It’s good to get the first two waves, and first Round out of the way and get back into competition. I’m so thankful that there’s swell, it’s pumping out there. It can be tricky, there’s a boil and sections seem to pop up out of nowhere. It’s all about studying the wave as much as you can.”

Yuko Shimajiri (JPN) finished equal 9th at last year’s Swatch Girls Pro China and today was forced into elimination Round 2, but won her heat over Simone Robb (ZAF) to advance into Round 3.

“I watched all day and saw other surfers getting great waves but I couldn’t find any,” Shimajiri said. “At the end of the heat I thought I was going to lose, but I got a wave and it was the biggest score of the heat and I made it through. I am so happy! This is my third time to China for this event and I love it so much!

Kassia Meador (USA) lost in Round 1, but bounced back in Round 2 and won through thanks to a risky board change. Meador borrowed a board from fellow competitor Yuko Shimajiri, a board she had never surfed before and it paid off and she booked her ticket into Round 3.

“It’s hard to get a good one, especially on a log,” Meador said. “The board I was riding earlier was a classic 50s style pig and when it’s bumpy or wonky it’s the worst thing you can ride. I felt like I was on a bucking bull. Then Yuko (Shimajiri) said to ride her board, and I’ve been riding Donald Takayama boards since I was 15-years-old and even though I hadn’t ridden that exact board I knew it would go well for me. That was awesome of her to let me use her board.”

Karina Abras (BRA) advanced into Round 3 over Australian surfer Emma Webb (AUS) and will surf against American Tory Gilkerson (USA) when Round 3 starts tomorrow.

“I’m very relieved to win that Round 2 heat,” Abras said. “The waves today have been amazing, long and powerful and have been really fun. China is amazing, nice vibes and great waves. I’m very thankful to Swatch, they look after us and put on a great event.”

For more information, photos and videos log on to www.SwatchGirlsPro.com