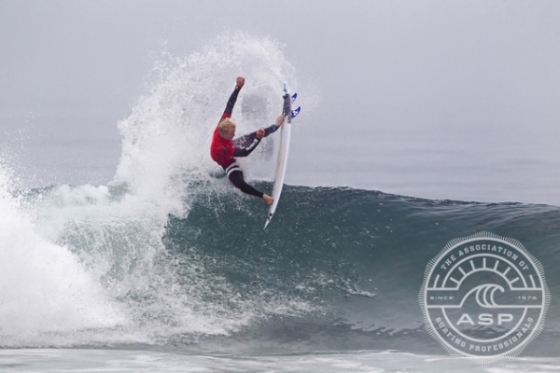 SUPERTUBOS, Peniche/Portugal (Thursday, October 17, 2013) – Nat Young (USA), 22, with his berth into the Semifinals of the Rip Curl Pro Portugal pres. by Moche, has claimed the 2013 ASP WCT Rookie of the Year title.

Young, who is the first Northern California surfer to qualify for the elite ASP World Championship Tour (WCT) since Adam Replogle in 1998 and enjoys a huge hometown support.

“It feels awesome,” Young said. “It was a goal of mine since the start of the year. It’s what I worked all year for and it feels amazing when you achieve a goal you’ve been focused on. All my career so far has been small stepping stones so hopefully I can continue building and next year or the year after put myself up there in the Top 5.”

After a sterling amateur career, the lightning-fast goofy-footer claimed the 2009 ASP North America Pro Junior Title before assaulting the qualifying series, collecting standout results in Hawaii, Australia, South Africa and home in America before qualifying for this season’s elite tour.

A Runner-Up finish at Bells Beach and an Equal 3rd in Bali mark the high water points for Young in his inaugural season and his performance in Portugal, currently into the Semifinals, edges out his Rookie of the Year competitionFilipe Toledo (BRA), 18, andSebastian Zietz (HAW), 25, for the remainder of 2013.

Congratulations to Nat and we look forward to another great year from you in 2014.

Highlights from the Rip Curl Pro Portugal will be available vialive.ripcurl.com

The next and final stop on the 2013 ASP World Championship Tour (WCT) will be the Billabong Pipeline Masters from December 8 – 20, 2013.