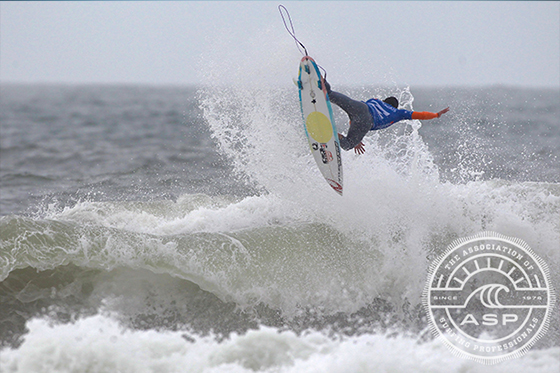 Pictured: Gabriel Medina (BRA) took it to the air today, dominating his way into the Round of 24.

PRAIA DE CARCAVELOS, Cascais – Portugal (Wednesday, October 23, 2013) – The ASP Prime Cascais Billabong Pro completed another full day of competition to complete the first round and eleven heats of the second in difficult 3-5Ft waves at Carcavelos.

Event No. 6 of 8 on the 2013 ASP Prime Series, the Cascais Billabong Pro resumed this morning in improved conditions before strong onshore winds cam into play. With important ranking points on offer, this event plays a vital role in the qualification campaigns towards next year’s Elite Top32.

Gabriel Medina (BRA) 19, stepped up his game to the next level today after a rather discrete start in this event, pulling massive aerials out of his bag of tricks to post two 9+ scores and net the highest heat total of the event so far, a near-perfect 18.94 out of 20.

“I feel good, I had some good and bad results this year and I’m just trying my best at every event,” Medina said. “I’m having fun here in Portugal, but I always want to win when I enter an event.”

The most publicized Brazilian out of a new up-and-coming generation of surfing talent, Medina leads the pack into the Cascais Billabong Pro and will be a force to be reckoned with when competition recommences with the no-loser round of 24.

“I feel honored to be a part of this new group of surfers coming up,” Medina continued. “This new generation has been doing so good, this is the best time for us and I’m enjoying every minute of it. This next round is really important and super fun to surf so I’m excited and I hope the waves improve.”

Carlos Munoz (CRI) 20, caused the upset of the day, eliminating Matt Wilkinson (AUS) 25, and Filipe Toledo (BRA) 18 in the second round. Munoz dosed perfectly a mix of aerial manoevers including a very technical kerrupt flip with some massive backside gauges to take the win.

“I’m really stoked, I’ve been trying to make heats on the Star tour and I finally made two in a row,” Munoz said. “I got two good waves at the start and stayed focus, paddled all the time. That heat was really hard with three WCT guys, I always watch them surf and to be there with them is amazing, let alone beat them.”

Jonathan Gonzalez (CNY) 33, former quarter-finalist of the Prime event in Margaret River and current World No.56, was in sizzling form today in Carcavelos. The Canarian caught a big righthander and performed two committed turns in the critical sections of the wave to belt an incredible 9.33 out of 10, the second highest score of the event so far. Gonzalez advanced into the next round, joined by other form surfer Conner Coffin (USA) 20.

“I had a good left just before and fell on the second backside turn, so when that right came I thought ‘please don’t fall again’,” Gonzalez admitted. “When I came down on that last turn, my backfoot went off and the white water somehow helped me recover ! I struggled to find a back-up but luckily I got one at the end there and got first place.”

Jeremy Flores (FRA) 25, current World No.18, was in a dominant form today posting a solid heat win to advance into the round of 48. Flores started the day with a convincing performance on his backhand, tagging two huge turns on a set wave to score an excellent 8.00 point ride and advance alongside Jean Da Silva (BRA) 28.

“I’m happy to make that heat, it was hard but I got a couple good waves,” Flores stated. “I haven’t had the best season this year, I feel like I’m only starting to get a little better, and I really want to finish this season strong and start off 2014 with a clean slate.”

The young Frenchman will surf in the remaining heat of the second round when the event recommences, as competition was called off before the round could be completed.

Surfers and event officials will reconvene at 10am tomorrow to re-assess conditions. Official event forecaster, Magicseaweed calls for a decreased swell and strong onshore winds making conditions difficult at Carcavelos.

CASCAIS BILLABONG PRO ROUND OF 48 RESULTS:

CASCAIS BILLABONG PRO ROUND OF 96 RESULTS: