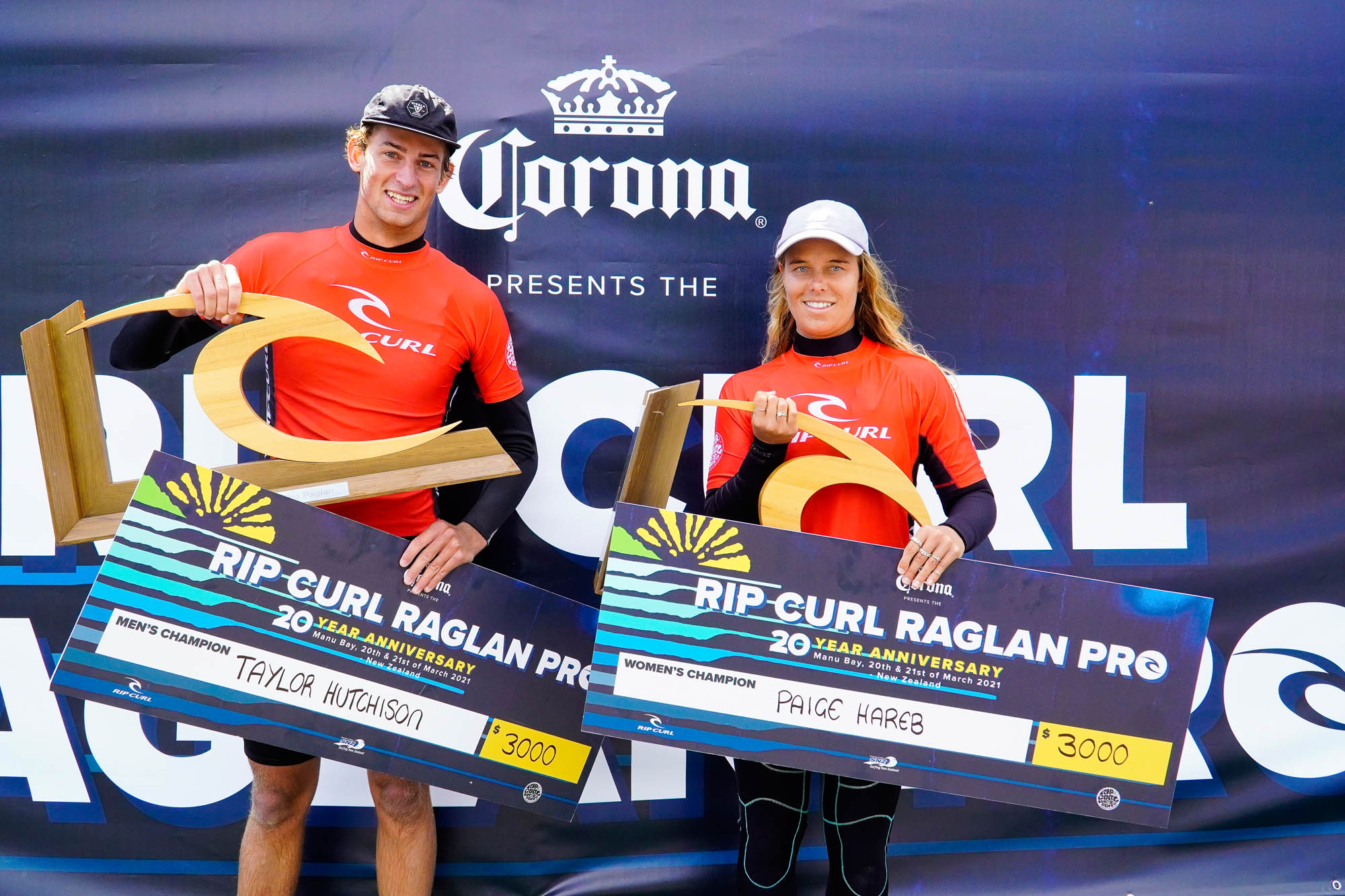 Raglan’s Taylor Hutchison and Taranaki’s Paige Hareb have both surfed to big wins at the Rip Curl Pro Raglan presented by Corona today (Sunday 21st March) as they decimated the perfect waves wrapping into Manu Bay.

Hutchison continued his good form throughout the early stages of the event after posting the only perfect ten point ride on day one and then posting excellent scores in all three heats he contested today.

“I am stoked to finally get a win here at home.  I had such a good run this weekend and to surf in the final with these guys was awesome” said Hutchison.

“Most heats or finals when your opponents are chasing over a nine point ride, you think you are pretty safe but not out there today, the waves were so good and these guys in the final all had waves in that range so it was not over until that final hooter” he added.

Hutchison’s precision backhand appeared to have stepped up a notch this weekend where he continually found the biggest waves with the best form and surfed tight and aggressive in the pocket.

Waihi Beach surfer Levi Stewart was the closest of Hutchison’s opponents, however, only one point separated second through fourth.  Stewart had an excellent run through to the finals and finished with a 15.97 point heat total in the final to outpoint Alex Dive (Mnt) in third and the youngest of the finalists, Tom Robinson (Whngrei) in fourth.

Earlier in the day Hutchison and Robinson defeated Conor McLennan (Chch) and Chris Malone in the first semifinal while Dive and Stewart defeated Ricardo Christie (Gis) and Sean Peggs (Tairua) in the second.

Hareb controlled The Open Women’s Division Final from start to finish after opening with good scores and holding priority through the latter stages of the final to find the best waves.

“We had such great waves all weekend so the level of surfing was so good from everyone” said Hareb.

“It is good to get the win out there, I feel like I am on a roll after making the finals at the National Championships as well and now winning the Rip Curl Pro, even though it was still hard to secure eight and nine point rides from the judges” she added.

Hareb’s superior speed and vertical turns and powerful wraps down the corner of Manu Bay kept her opponents at arms length.  Hareb makes it two wins from two at Raglan after her most recent win at Manu Bay in November last year.

15-year-old Ava Henderson (Chch) was the closest to Hareb but several smaller waves in the dying stages of the final were never going to be enough for an 8.5 ride required to challenge Hareb, who patiently sat out the back with priority wating for the best waves.

Earlier in the day Hareb and Paul defeated Liv Haysom (Piha) in the first semifinal while Ensor and Henderson defeated Natasha Gouldsbury (Tara) in the second semifinal.

The Rip Curl pro pres by Corona is the final event before the New Zealand Surfing Team is named early next week with the team set to attend the ISA World Surfing Games being held in El Salvador from May 29 – June 6.

The Rip Curl Pro is the second event of the New Zealand Surf Series which heads south to Dunedin and Christchurch in the next month before events at Taranaki and Piha to conclude the season in May.

Complete event write-ups, results, surfer ratings and images from the event can be viewed at Surfing New Zealand.

Imagery
Web clips and newsfeeds will be distributed free of charge from the event. Please contact Ben Kennings for further details.

Sponsors
Generous support from Rip Curl, Corona, and Surfing New Zealand has made this event possible.