The event saw an array of Championship Tour (CT) surfers battling to protect their place in the Top 34 and going head-to-head against up-and-coming Qualifying Series (QS) talent fighting hard to join the elite tour.

Dynamic standout Toledo becomes the third consecutive Brazilian to win the event, after Gabriel Medina (BRA) and Miguel Pupo (BRA) claimed victory in 2012 and 2011 respectively. 2014 QS winner Toledois currently in third place on the CT rankings following his maiden CT win on the Gold Coast and the result today at Lower Trestles sees him move to second place on the QS rankings.

“I was definitely super blessed this week and got to spend lots of time with my friends and family,” said Toledo. “It’s such a good vibe to be with them. I think that’s what happened, I got all their good vibes. I felt super comfortable and confident out there and my boards felt amazing. It was all just wonderful.”

Toledo was the form surfer of the event, previously facing Charles Martin (GLP) and Dusty Payne (HAW) en route to the Final today. The dazzling young Brazilian used his air game to full effect, with an aerial maneuver on almost every wave through the day. Toledo was able to consistently manufacture excellent scores, even on smaller inside waves, and dominated the lineup throughout the event.

“The world title is definitely on my mind and I can’t wait to get that yellow jersey back again,” continued Toledo. “It’s going to be an amazing competition in Brazil and we’re going to have a lot of support. After Gabriel’s world title last year, this year is going to be amazing and the event will be packed and crazy.”

Toledo continued his relentless run of form in the 35-minute Final, with two seven-point rides with just 10 minutes gone, leaving the Frenchman with a modest two-wave total. Another exchange with 13 minutes remaining saw three big turns from Flores for 7.20 and a series of critical maneuvers from the fleet-footed Brazilian for an excellent 8.30. An exhausted looking Flores took a final wave with 30 seconds remaining but couldn’t produce the 8.93 required and secures a runner-up finish while Toledo claimed the win.

“The start was a little slow but I began with a good wave and that gave me a lot of confidence and then I took more inside waves,” said Toledo. “I think I’ve got the best support ever. I’ve got all my family and friends here so it’s the best feeling in the world. When I finish the wave I hear everyone screaming and it’s really motivating for me.” 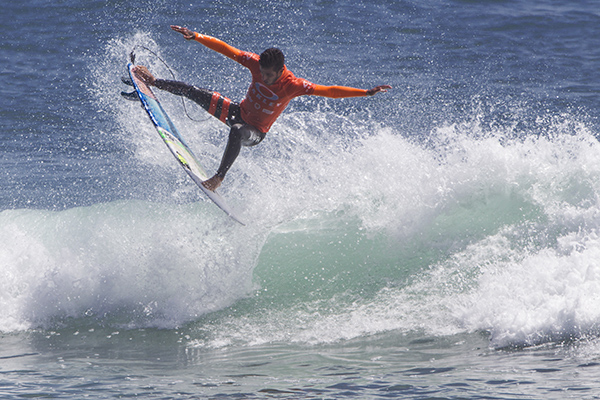 Flores is currently in 13th place on the CT rankings, with two ninth-place finishes and a 25th during the Australian leg of the CT this season. Today marks the first Final appearance for the CT veteran from Reunion Island since winning the Pipe Masters in 2010. Flores previously dispatched Michael Rodrigues (BRA), Michael Dunphy (USA) and Wade Carmichael (AUS) before facing Toledo in the Final, delivering dominating performances through the event. Flores, who surfed through four heats today, leaps up to 5th on the QS rankings.

“I want to thank everyone for sticking around all week and there’s always a good vibe here,” said Flores. “I’ve been coming here for so long that it always feels like home. Toledo is the man and the best surfer in the world in these conditions for sure. Congratulations to him. I really want to thank all my friends and supporters for being there for me through all the ups and downs.” 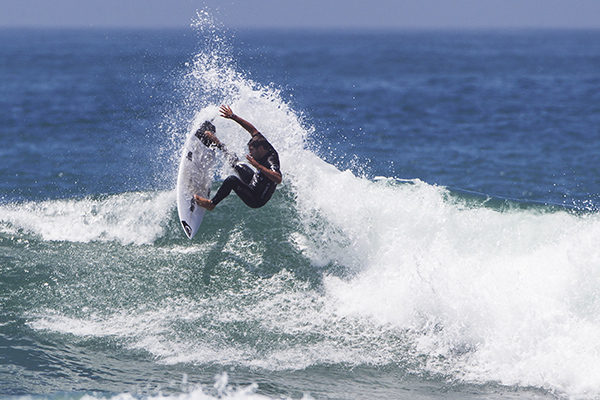 The opening Semifinal saw a much anticipated match-up between CT surfers Dusty Payne (HAW) and eventual winner Toledo, and the heat did not disappoint. Toledounleashed early on a Lowers left for an excellent 8.57 and continued to show energy and rhythm throughout the heat, his antics bringing the cheering crowd to their feet. Payne found himself in a combination situation with just 0.30 in his scoreline but the Hawaiian went on to show off his rail game and power turns to earn an 8.10 and break the combination. He was left in need of an excellent 9.14 for the win and, with the clock winding down, Payne couldn’t find the score despite a last-second effort. Payne takes home a third-place finish, 65,000 QS points and 10th position on the rankings.

“It’s such a fun wave here and I’m pleased with the result,” Payne said. “Toledo is pretty much untouchable out here so I just stuck to what I can do best, which is big, open-faced turns.”

Australian powerhouse Wade Carmichael (AUS), the only non-CT surfer to make it through to the Semifinals, battled Flores for a place in the Final. Third place today is Carmichael’s best result on the QS since 2013. Flores kept busy through the opening half of the heat, delivering a 7.17 for the lead but Carmichael answered quickly with a 6.50. With just under three minutes remaining Flores used his priority to block the Australian and improve his back-up score. Carmichael responded in the final moments but it wasn’t enough to take the lead, and he moves from 88th to 6th place on the QS rankings.

“This is the best start I’ve had to my year,” Carmichael said. “I’m stoked and I’m just going to try and keep this roll going and stay in the top ten. I’ve got my base now and I can work from there. I need a couple more heats and I really want to get a win this year, that’s my goal. I’m trying to stay consistent, not push too hard and make little mistakes. It’s definitely not easy without a sponsor but I’m really motivated to keep training and surfing better and better. It pushes me to keep working hard.”

Local favorite and former event finalist Tanner Gudauskas (USA) previously faced Semifinalist Carmichael in the Quarters. The American held the top spot but Carmichael was able to force a lead change with a 5.43 to back up his earlier 7.50. An exchange at the four-minute mark saw the Australian deliver a foam-climb and big wrapping cutback and was awarded an excellent 8.23 to solidify the lead. Gudauskas answered back on his forehand but it wasn’t enough to reclaim the lead. The American was left searching for a 7.97 through the final minute and goes home in 5th place, moving to joint 15th place on the QS rankings.

“It’s so fun to be here and it’s really cool that everyone takes time out of their day to come down and watch the contest,” said Gudauskas. “I can’t tell you how thankful I am for all the support. I just wish I could have gotten another wave. It was a slow start and I was really trying to build a rhythm but I just couldn’t. Wade (Carmichael) has been ripping this whole event so I knew it would be hard and I’m stoked for him that he made it. I’m leaving tomorrow for Saquarema and I love that wave so we’ll see what happens.”

Highlights from the Oakley Lowers Pro are available at OakleyLowersPro.com and WorldSurfLeague.com.
View the QS rankings here.