“It’s just phenomenal,” said Conlogue. “Carissa’s been on such a stellar run and I was thinking, maybe I can end it. I had a bit of a tricky start to this event and was feeling out of rhythm. On the off days I just went surfing a lot and have a bunch of fun and I think that it got me all psyched and happy for the end of the event.”

The win today sees Conlogue steadily improve on her performance this year, having previously claimed fifth place on the Gold Coast and a third at Bells Beach. The result moves her to second place on the WSL rankings going into the fourth event of the year, the Oi Rio Pro. 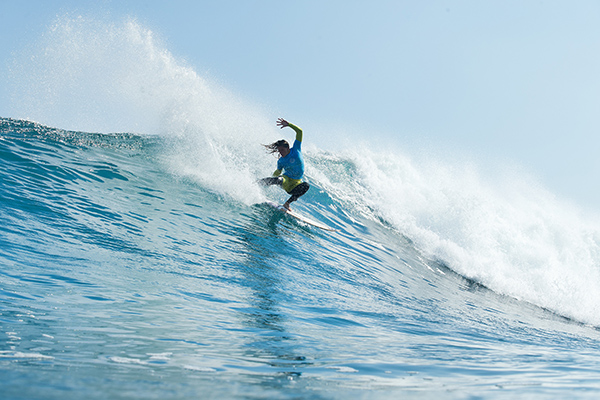 “I’m feeling really good and like the hard work is starting to pay off,” continued Conlogue. “I’ve put so many hours into trying to get into the top seeds and I want to try and crack open the top three. They are such amazing talents and you really have to be on point when you’re competing against them and leave no question marks. I’m so thrilled to have the opportunity to surf here with them in these kinds of conditions. I’m so thankful and appreciative for all the support I have.”

Conlogue drew first blood in the Final for a modest score, a 5.33, and an early lead. An uncharacteristic priority mistake from Moore with twenty minutes remaining left Conlogue with her pick of the waves but Moore came back to take an inside wave, unload two big turns and earn an excellent 8.50. The Californian answered back with a big layback hack to reclaim the lead and then took a set wave for an excellent 8.43. The Hawaiian was left without priority needing a 6.60 and found only a 4.63 at the six-minute mark. Conlogue had four minutes remaining to control the lineup and hold off the two-time World Champion and found a big righthander, delivering three solid terms to improve her scoreline with an 8.50, and take the win.

“I’ve spent a lot of time out here and I have great support,” said Conlogue. “This is our last stop on the Australian leg of the Tour and it’s been really amazing. Carissa is such an amazing talent and to be able to compete against her and all the other amazing talent is just wonderful and really pushes me to get better. The world title is everyone’s dream and I’m just going to try my best and keep surfing as well as I possibly can.”

The second-place finish today from Moore and her third final of 2015 sees her retain the Jeep leader jersey and no. 1 spot on the rankings. Moore, who got the better of Tyler Wright (AUS) in both 2014 and 2013 to claim consecutive victories at Margaret River, defeated both Sally Fitzgibbons (AUS) and Tatiana Weston-Webb (HAW) before facing Conlogue in the Final.

“I’m so stoked with this result,” said Moore. “The waves were really good today and Courtney did an amazing job. She’s such a hard worker and I couldn’t be happier for her. It’s been an amazing Australian leg for me but I’m very excited to get back home. Thanks to everyone for putting on this event.” 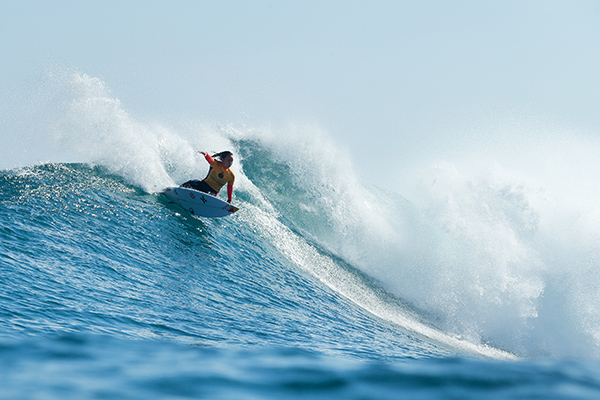 In a rematch of the Bells Beach Semifinals Mooreand Sally Fitzgibbons (AUS) went head to head in Semifinal no. 1 today. Fitzgibbons took the early leave with a 6.33 and a 7.50 but the Hawaiian came back with a display of aggressive, power surfing for an excellent 9.33 to put her back in the heat, needing only a 4.50 to take the lead. Fitzgibbons increased her lead with a 6.77, but Moore locked in a 5.40 for the top spot, leaving the Australian searching for a 7.24. With less than a minute remaining Fitzgibbons took a wave but it wasn’t enough and she leaves with her second third-place finish of the year and moves to fifth place on the rankings. Today marks the 22nd CT match-up for the pair, with Moore evening the score to make it 11 wins apiece.

“This result for me feels like I’m building momentum for next event,” Fitzgibbons said. “I’m disappointed, I would have liked to make it into the Final and put myself in a better position. When you get pipped at the end of the heat like that you just have to re-group and use that anger and frustration to come out firing at the next week.”

Conlogueopened up her Semifinal heat against Malia Manuel (HAW) with a bang, claiming an excellent 9.00 for a power snap followed by a tube ride. Manuel posted her first score of consequence with ten minutes gone for a 6.44. Conlogue found another tube for a 7.00 to secure a solid 16.00 two-wave heat total, improving her lead with two more excellent scores. Manuel answered with a big score of her own, an 8.77, to escape from the combination situation but couldn’t find another and leaves Margaret River with a third-place finish, her best result of the year so far, to move her to no. 8 on the rankings.

“Courtney’s a very strong competitor,” said Manuel. “She trains so much and she had better luck with those waves and got the only barrel in the women’s competition. It was great to get into the Semifinals and break that Quarterfinal barrier. I had a rough one at Bells so this was a real confidence booster to get back and finish in the top 3.”

The Drug Aware Margaret River Pro runs from April 15 – 26, 2015 and the men’s Finals will get underway when competition resumes. Watch the unparalleled adventure, competitive drama and athleticism of professional surfing live at WorldSurfLeague.com.