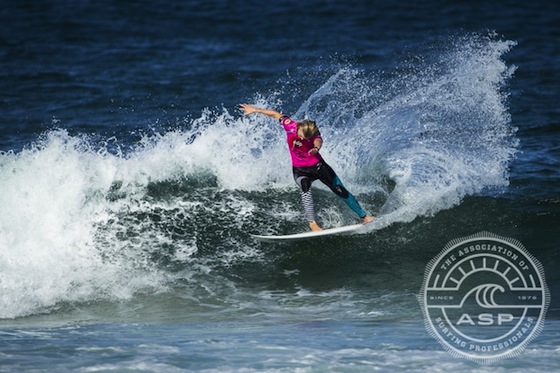 JOAQUINA BEACH, Florianopolis/BRA (Thursday, October 24, 2013) – The 2013 HD World Junior Championships presented by Devassa is set to see some of the finest under-21 talent travel to Joaquina Beach in Florianopolis, Brazil to do battle for the prestigious title of Association of Surfing Professionals (ASP) World Junior Champion. ASP Women’s Rookie of the Year Bianca Buitendag (ZAF), 19, will be leading the pack of female talent, as they are slated to battle from October 27 through November 3.

Bianca Buitendag has produced an incredible rookie year on the 2013 ASP Women’s WCT, finishing No. 8 overall as the only rookie this season. Buitendag, a two-time ASP World Junior runner-up, is looking to cap off her banner year with a victory at the HD World Junior Championships.

“Winning the World Juniors would mean I had the perfect season,” Buitendag said. “I have been to two World Junior Champs and have come second twice. If I have an opportunity, I am going to make the most of it.”

Buitendag has gained priceless experience throughout the course of her budding professional career and admits that a season among the ASP Top 17 has given her incredible preparation for a run at the ASP World Junior Title.

“A lot has changed since I won the event in Narrabeen,” Buitendag said. “At that point in my life I was in the process of deciding what I wanted to do after school. So after that event, a lot of doors have opened for me and the question was answered of what I wanted to do. Now I am here again just over two years later and I would never have imagined making it this far.”

While Buitendag enters the HD World Junior Championships as the most experienced competitor, young European surfer Johanne Defay (FRA), 19, has capped off a dominant season of her own, securing the ASP European Pro Junior Title and qualification for the 2014 ASP Women’s WCT. Defay hopes to carry her success to South America in an attempt to cap off her incredible 2013 campaign with a win at the HD World Junior Championships.

“I had my best year on the European tour this year,” Defay said. “It was actually my goal to win the tour and then go to the world juniors and win the world junior title too. Winning would mean that managed to accomplish my goals and it’s really important to me. I worked for it and I really want it!”

Defay will carry added confidence following her qualification for the ASP WCT, but admits that her focus throughout the 2013 season has been a successful run on the ASP Pro Junior circuit.

“I take my qualification for the WCT as a bonus,” Defay said. “I wasn’t expecting that this year. Like I said, my goal was on the junior, but it s certainly gives me more confidence. Still there are so many girls on the junior, so I will approach that comp in the same way as any other.”

Dax McGill (HAW), 15, is one budding talent set to take on the more seasoned competitors at this year’s HD World Junior Championships and hopes to gain experience by competing against the world’s best Junior surfers in a new location.

“I’ve been fine-tuning my boards, and training a bunch,” McGill said. “I’ve been staying loose by skating, too and I just went on a super fun trip to the Maldives with my family and we were able to surf our brains out. I just want to have as much fun as possible and give it everything I’ve got. I’ve never been to Brazil before. I’m so excited to surf in a new place and compete in a new event. I’ve heard that it’s gorgeous at Joaquina Beach and I hear the people are super friendly, too. I just can’t wait to soak it all in.”

At only 15 years old, McGill will be one of the youngest competitors in the year’s draw. While the North Shore standout dreams of adding her name to the elite list of Hawaiians, her focus remains on a strong start to the event.

“I’m only 15 and this is my first ASP World Jr. Champs,” McGill said. “I want to do my best, but I really just want to make the first heat. This event is so important. Being on that list of Hawaiians to win would be such an honor, but I’m just going to take it heat by heat!”