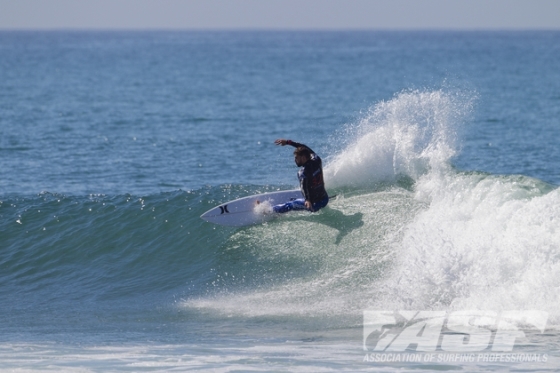 Stop No. 7 of 10 on the 2013 ASP World Championship Tour (WCT), the Hurley Pro at Trestles often represents the benchmark for progressive surfing and the world’s best surfers continued to log amazing performances in challenging conditions this morning.

Alejo Muniz (BRA), 23, was responsible for a big upset in Round 2, besting Hawaiian prodigy John John Florence (HAW), 20, in a Hurley Pro at Trestles rematch from last season. Muniz took to the Lowers set lefts on his high scores today, unloading polished backhand combinations to earn his position in Round 3.

“It’s a little bit smaller, but when you’re from Brazil, this is really good,” Muniz said. “I was a little bit nervous because John John (Florence) beat me here in his rookie year. Before my heat I talked to Mikey Picon (former competitor) and he told me the lefts were better than the rights on the set waves. I was just trying to get the bigger waves. I think John John was trying to get a lot of waves and I did the opposite and I’m stoked to get those waves.”

Muniz has been building momentum throughout the season following his victory at the AS Prime rated US Open of Surfing, but suffered a scare when he sustained a knee in Europe just weeks ago. Following close medical diagnosis, the Brazilian has been given the green light to surf through the injury and is hoping for a big result at the Hurley Pro at Trestles despite the setback.

“I’m riding the same board since the US Open and I’ve been riding it in the last two contests,” Muniz said. “It’s a great board. I had an injury in the Azores and I didn’t think I’d be able to come here, but everything went well with the MRI and the physio. I’m still surfing with pain, but my board is working amazing and I’m stoked.”

“Conditions are small and I went in to the heat thinking I was going to go left,” Patacchia said. “I saw Seabass (Sebastian Zietz) and Jeremy (Flores) get scores on rights and I knew Miggy (Miguel Pupo) was going to go out there and punt on the lefts and thought I had to look different. I kept an eye out for the rights and got a couple. My boards have been feeling good under my feet and I know when I get a right I can put it up in to the lip and throw a nice fin. Ever since Bali, my backhand has been my go-to.”

Patacchia got off to a challenging start to his 2013 season, missing the first three ASP WCT stops due to injury, but the Hawaiian talent has been a standout since his return. Patacchia, a nine-year veteran of the ASP WCT has found new-found inspiration this season and is hungrier than ever to battle the next generation.

“Before this year started I was talking to my wife thinking this year was going to be it,” Patacchia said. “When I thought about it, I decided I didn’t want it to be it. I have a family now, so I’m not taking as many free surf trips, but I love to compete and I want to stay on tour. I’m going to battle until someone takes my place.”

While several surfers were challenged to find a rhythm in today’s inconsistent conditions, Kauai’s Sebastian Zietz (HAW), 25, was electric in his heat win over Raoni Monteiro (BRA), 31. Zietz has been impressive on his rookie season among the ASP Top 34 and following a 25th place result at Teahupo’o the talented Hawaiian hopes to rebound with a strong performance at the Hurley Pro at Trestles.

“I was super bummed in Tahiti and I didn’t really trust my instincts,” Zietz said. “I’m going back to the old school and trusting my instincts. I’m hoping to get a result here and I love Trestles. It’s been a big part of my career. It’d be great to get a Quarters or Semis and I’ve got a good small wave board.”

Patrick Gudauskas (USA), 27, local standout and current alternate on the ASP WCT, earned his first career Hurley Pro at Trestles heat victory today, besting current ASP World No. 10 Adrian Buchan (AUS), 31, in a wave-starved heat. Gudauskas has lost a series of close heats in previous events, but hopes his recent success will carry in to the latter rounds at Lowers.

“The local support is so sick and that is the first ‘CT heat I’ve ever made here at Trestles, so I’m pumped,” Gudauskas said. “I was feeling pretty confident. I’ve been surfing well and the conditions are pretty good for the local guys. I’m feeling good going in to this event, I had the win in Virginia Beach and I’ve got good boards right now.”

Jeremy Flores (FRA), 25, standout at the last ASP WCT stop in Tahiti’s heavy barrels, had an impressive display of versatility today, topping Yadin Nicol (AUS), 27, to secure a Round 3 berth. Flores was careful with his wave selection and admitted that patience was crucial in earning a heat victory.

“On the Dream Tour, we’re surfing really good waves all of the time so we’re not used to competing in these conditions, but you have to be a complete surfer,” Flores said. “Wave selection out there is super important today because there are a couple that are going to make the difference. They open up more, whether it’s a right or left and there are not many waves so you have to get the good ones. It’s anyone’s game out there.”

Kolohe Andino (USA), 19, current ASP WCT No. 22 and local standout, capped off the day with an impressive routing of lethal goofy-footer Matt Wilkinson (AUS), 24. Andino was in sizzling form in the afternoon conditions, blending full-rail hacks with progressive aerials to emphatically advance into Round 3 of competition.

When competition resumes, up first will be Jordy Smith (ZAF), 25, up against Brett Simpson (USA), 28, in the opening heat of Round 3.

Event organizers will reconvene at 7:30am local time tomorrow for a possible 8am start for Round 3 of the Hurley Pro at Trestles. The event window runs from September 15-21, 2013 and is webcast LIVE via www.thehurleypro.com