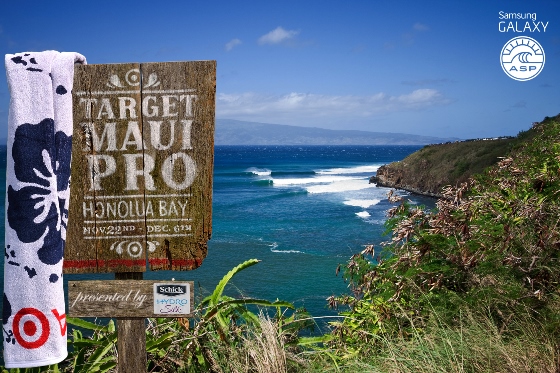 LOS ANGELES, Calif. (Wednesday, August 6, 2014) — Association of Surfing Professionals (ASP) International is pleased to announce Target as the title sponsor for the Maui Women’s Pro, the final stop on the 2014 Samsung Galaxy ASP Women’s World Championship Tour, which will be held from November 22 through December 6, 2014 at the world-class Maui pointbreak of Honolua Bay.

The Target Maui Pro presented by Schick Hydro Silk will return the world’s best female surfers to the region for the first time since 2009. Part of an elite 10-event series held around the world to determine the ASP Women’s World Champion, Honolua Bay will serve as the final stop on this season’s thrilling battle for the world surfing crown.

“Maui as the season-ender to the elite women’s schedule is a great enhancement to the ASP season and having Target’s support is very exciting,” Jessi Miley-Dyer, ASP Deputy Commissioner, said. “We have the most talented female surfers ever in this season’s Top 17 and one of the most exciting races for the crown in recent history. Honolua Bay is truly a world-class wave and the Target Maui Pro is an excellent way to cap off a historic season.”

Carissa Moore, reigning two-time ASP Women’s Champion and current ASP No. 1, has competed as a wildcard in the past at Honolua Bay and will defend her women’s world surfing crown at this year’s event.

“These are easily some of the best waves on the planet and they’re set in the most beautiful location,” Moore said. “Honolua Bay is the ideal platform for the ASP Top 17 to perform upon and I can’t thank Target enough for supporting us there.”

Target has a long history of supporting elite athletes on the ASP tours, but the Target Maui Pro will be the company’s first involvement with an elite event sponsorship.

“Carissa has been a partner of Target since 2009, and this year we are doing even more by working with the ASP to help bring elite surfers like her to the world’s best waves,” said Daniel Griffis, vice president, Experiential Marketing and Alliances, Target. “Target’s goal is to help better the sport for its competitors and fans, so we are proud to play our part in bringing this women’s ASP WCT event back to Honolua Bay.”

“It’s a pleasure to partner with such a great retailer as Target,” said Mark Noonan, Global Chief Commercial Officer, ASP. “The combination of  the world’s best female surfers, the world-class waves of Honolua Bay and Target as a title sponsor will ensure a fantastic end to this year’s Women’s WCT. We thank Target for their support and look forward to a incredible event.

The next stop on the 2014 Samsung Galaxy ASP Women’s World Championship Tour will be the Swatch Women’s Pro Trestles from September 9 – 20, 2014.

About the Association of Surfing Professionals
The ASP is the world surf league. The ASP organizes the annual tour of professional surf competitions and broadcasts each event live at www.aspworldtour.com where you can experience the athleticism, drama and adventure of competitive surfing — anywhere and anytime it’s on. Travel alongside the world’s best male and female surfers to the most remote and exotic locations in the world. And fully immerse yourself in the sport of surfing with live event broadcasts, social updates, event highlights and commentary on desktop and mobile.

About Target
Minneapolis-based Target Corporation (NYSE: TGT) serves guests at 1,925 stores – 1,795 in the United States and 130 in Canada – and at Target.com. Since 1946, Target has given 5 percent of its profit to communities, that giving equals more than $4 million a week. For more information, visit Target.com/Pressroom. For a behind-the-scenes look at Target, visit ABullseyeView.com or follow @TargetNews on Twitter.