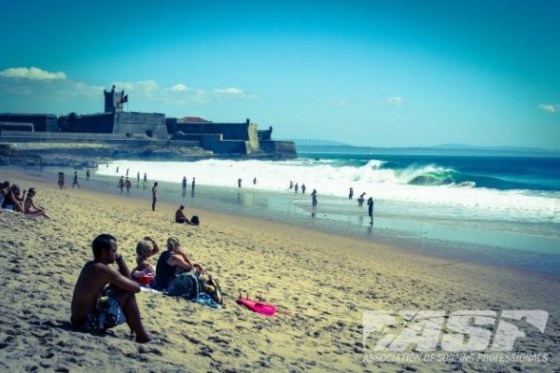 CARCAVELOS, Cascais/Portugal (Sunday, September 29, 2013) – The 2013 ASP Women’s World Championship Tour (WCT) will culminate with the eighth and final stop of the year, the EDP Cascais Girls Pro, running this week from October 3 – 7, 2013.

After a season that has witnessed the world’s best female surfers do battle in Australia, New Zealand, Brazil, USA and last week in France, the EDP Cascais Girls Pro in Portugal will host this year’s thrilling conclusion to the requalification campaigns of the ASP Top 17 as well as the hotly-contested battle for the 2013 ASP Women’s World Title.

While the Hawaiian has a narrow 200-point lead over Wright, once both surfers reach the Quarterfinals, the Australian has the advantage:

While the primary focus in Portugal will be the Moore/Wright battle for this year’s surfing crown, another major story unfolding will be the qualifiers for the 2014 ASP Women’s World Championship Tour. The 2014 ASP Top 17 will be comprised of the top 10 finishers on this year’s ASP WCT rankings, the top 6 finishers on this year’s already-completed qualifying series as well as the ASP wildcard. A number of elite tour campaigners are currently hovering around the top 10 cutoff mark heading into the EDP Cascais Girls Pro and competition is sure to be intense amongst the world’s best female surfers.

The EDP Cascais Girls Pro will run from October 3 – 7, 2013 and will be webcast LIVE viawww.aspeurope.com/edpcascais