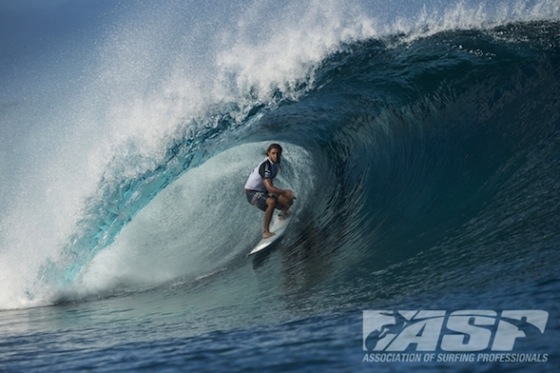 Pictured: Matt Wilkinson (AUS), 24, parks it in a Teahupo’o pit en route to a Round 1 win at the Billabong Pro Tahiti.

TEAHUPO’O, Tahiti (Thursday, August 15, 2013) – The Billabong Pro Tahiti, Event No. 6 of 10 on the 2013 ASP World Championship Tour (WCT), completed Round 1 and the opening four heats of Round 2 today, with the world’s best surfers taking on racy three-to-five foot (1.5 metre) barrels at Teahupo’o.

John John Florence (HAW), 20, current ASP WCT No. 14, continued his impressive return to form today, putting in a dominant performance in a relatively wave-starved heat. The Hawaiian prodigy opened his Tahitian campaign with an excellent 9.07 barrel ride, quickly followed with a 7.50 for three ferocious backhand turns. Florence’s success left Julian Wilson (AUS), 24, and Miguel Pupo (BRA), 21, in need of a combination of scores at the end of the heat.

“Waves were pretty fun, better than I thought it was going to be,” Florence said. “There’s a weird wind chop on it. The other heats were more consistent and had the double-ups and I got that one 9. I was able to get a backup and do a couple of turns, so I’m stoked. Tahiti is always fun and always beautiful. Happy to be here.”

Joel Parkinson (AUS), 32, reigning ASP World Champion, was another to capitalize on recent momentum (following a win in Bali) and got the best of a high-scoring Round 1 affair this morning compliments of technical backside tuberiding. The Australian would best Kolohe Andino (USA), 19, and Anthony Walsh (AUS), 30, despite a perfect 10 point ride from the wildcard to earn the win.

“I thought it was going to be a battle,” Parkinson said. “I didn’t think my two 8s were going to be enough and then it slowed down. The swell isn’t completely here yet and there will be a quick flurry and then the waves will slow down. I’ve got a couple of good boards and I’d love for nothing more than some good waves.”

Kelly Slater (USA), 41, 11-time ASP World Champion and four-time Billabong Pro Tahiti winner, was on the back foot for the majority of his Round 1 heat this morning until the dying moments of the bout. However, with seconds on the clock, the current ASP WCT No. 2 drove through a deep backhand tube, earning an 8.50 for the ride and a position in Round 3.

“I was kind of lucky that one even came in the end,” Slater said. “I blew the best wave of the heat and lost my fins. I had the line I wanted and just lost my fins on the foam-ball and was too far behind to catch up. Brett (Simpson) had a few opportunities and paddled too wide. My waves weren’t that great and I was just trying to make things happen.”

Jordy Smith (ZAF), 25, current ASP World No. 4, got off to a quick start in his Round 1 heat, dominating his affair from start-to-finish. The powerful South African would best fellow countryman Travis Logie (ZAF), 34, and trials winner Alain Riou (PYF), 30, compliments of a rare righthander and a racy left barrel to secure a spot directly in to Round 3.

“The swell is really west today and if you have that opportunity, you can go right,” Smith said. “I thought that one would be my highest score. I was pumped. In the beginning I waited for priority and lucked in to an 8.10 and that set me up for the heat right there.”

Smith has admittedly struggled to find a result at the Billabong Pro Tahiti throughout his budding career, but hopes his experience at Teahupo’o over the years will help him earn a top result in 2013.

“I’ve always had one good wave in a heat and always come up against wildcards and that’s a tough thing out here,” Smith said. “I think I’ve chosen the wrong waves in the past as well. I really want to do well, especially in the Pacific leg. I’m taking my time and watching the best guys out here.”

“I always feel pretty comfortable out here,” Patacchia said. “We don’t have the best surf today, but we’re still getting barreled, so it’s fun. I’ve been surfing against Mick (Fanning) a lot and surfing against him makes me surf better and surf smarter heats. I feel like my level of surfing is getting better because I’ve been competing against him.”

Fanning would go on to post a Round 2 win over Poulou this afternoon, advancing through to Round 3 of competition.

Yadin Nicol (AUS), 27, ASP Top 34 replacement surfer, issued a big upset today, relegating local favorite Michel Bourez (PYF), 27, to Round 2 with a near-perfect 9.07 earned for a critical drop and deep barrel in the final minutes of their clash.

“It’s kind of onshore out there, so at the start I thought I might have to do some turns,” Nicol said. “We had a weird priority call at the start that went in to my favor and I seemed to have priority on the last wave of the set. Most of the waves I got were bad, but it just turned out in my favor with that last wave at the end. That one hit the ledge at the end and I had to go. I pushed myself over the ledge and squeaked through, so I’m stoked!”

Kieren Perrow (AUS), 36, veteran elite tour contender, rebounded from a horrific wipeout on his opening wave this morning to recover and earn the day’s high heat total of 16.60 out of 20 with two excellent barrels.

“I had a shocker to start,” Perrow said. “I didn’t know what was going on and I couldn’t set my line properly. I was just trying to take off deep and head slapped pretty hard when I hit the water. It was one where you had a headache right away. I had to reset after that. I started with a 7.67 and was only chasing a low score, but you really can’t chase a small score out there. I was waiting for a good bomb and that one came.”

Event organizers will reconvene tomorrow morning at 6:30am to assess conditions for a possible 7am start.

When competition resumes, up first will be Michel Bourez (PYF), 28, against wildcard Nathan Hedge (AUS), 34, in Heat 5 of Round 2.

Highlights from the Billabong Pro Tahiti are available via  http://www.billabongpro.com/tahiti13

Surfline, official forecasters for the Billabong Pro Tahiti, are calling for:

A small, mid period SW swell will continue Friday. Another small, shorter to mid period SSW swell is on track for Sunday and Monday. We’ll continue to watch the long range charts for something that will potentially be a little better for the end of the event waiting period.