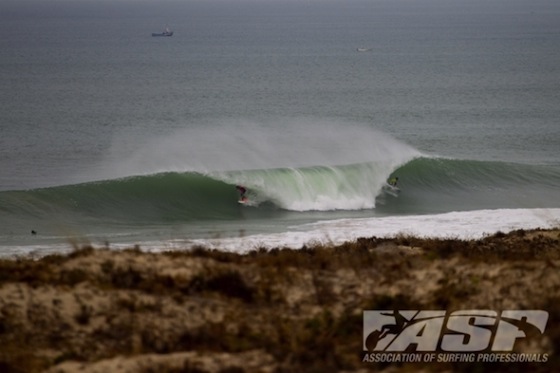 SUPERTUBOS, Peniche/Portugal (Tuesday, October 8, 2013) – The Rip Curl Pro Portugal presented by Moche, Event No. 9 of 10 on the 2013 ASP World Championship Tour (WCT), will commence its competition window tomorrow and the world’s best surfers have arrived in Peniche ready to do battle in the barrels of Supertubos.

“The European leg has historically been a strong leg for me and I’m looking forward to the coming days,” Fanning said. “There are so many good surfers on tour right now and the talent at the very top is so strong. There may only be two events, but there’s a long way to go before the 2013 title is decided.”

Fanning will face Matt Wilkinson (AUS), 25, and Francisco Alves (PRT), 19, in the opening round of competition.

Kelly Slater (USA), 41, 11-time ASP World Champion, suffered an uncharacteristic early exit in the Quarterfinals of France last week, and the former event winner will have to improve if he is to remain in the hunt for the 2013 ASP World Title.

“Not the result I was looking for in France, but sometimes you have off heats,” Slater said. “It worked in Mick’s advantage and I will have to perform in Portugal and Hawaii if I want to remain in the race. They’re both events I’ve done well in in the past so I’ll be trying to have similar form this year. Last year wasn’t great for me in Portugal so I’ll want to improve there definitely.”

Julian Wilson (AUS), 24, defending Rip Curl Pro Portugal winner, is having a banner year of his own, posting consistently strong performances to currently sit No. 6 on the ASP WCT rankings.

“It’s great to be back in Portugal,” Wilson said. “The people, the culture and the waves are all amazing. I collected my first ‘CT win here and it will always hold a special place for me. Looking forward to getting some solid barrels in over the next couple of days.”

When competition commences, Wilson will face Fredrick Patacchia (HAW), 31, and Yadin Nicol (AUS), 27, in the opening heat of Round 1.

Event organizers will convene tomorrow morning at 7am to assess conditions for a possible 7:30am start.

Magicseaweed, official forecasters for the Rip Curl Pro Portugal, are calling for a four-to-six foot (1.5 – 2 metre) swell to be on tap for the opening day of the window.

The Rip Curl Pro Portugal will run from October 9 – 20, 2013 and will be webcast LIVE via www.live.ripcurl.com