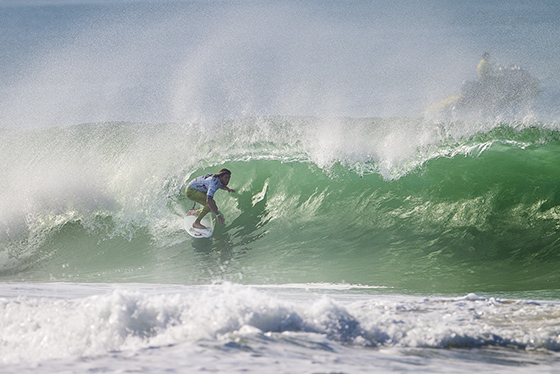 Matt Wilkinson (AUS) 25, put on a dominant performance this morning, netting a 17.37 out of a possible 20 to advance over current ASP frontrunnerMick Fanning (AUS) 32 and event wildcard Francisco Alves (PRT), 20.

“I knew where I wanted to sit and I was just hoping that the conditions wouldn’t change too much,” Wilkinson said. “I got a few okay ones at the start and it was kind of scary I saw Mick (Fanning) get a wave before my last one and I thought it might be the score so I didn’t know if I was chasing a score or not. That last one, I knew I was deep, I took off and was just pumping as hard as I could cause I really wanted to make it, I was stoked.”

Currently sitting No. 24 on the 2013 ASP WCT rankings, Wilkinson is in need of a strong finish to the year if he is to remain amongst the world’s elite next season.

“I feel like I’m competing well, hopefully I can keep doing it,” Wilkinson said. “I love it here, getting barrelled on a sandy bottom is the funnest thing you can do, and here’s one of the best places in the world to do that. This year the bank is more lefts than rights, which I’m pretty stoked about. It makes you feel good running down the beach and knowing there’s a lot of support, I’m not really sure why but they seem to always liked me so I like it here too !”

Jacob Willcox (AUS) 16, winner of the yesterday’s Moche trials and wildcard into this event, caused another major upset this morning, relegating 11-time ASP World Champion and current ASP WCT No. 2,Kelly Slater (USA), 41, into the elimination Round 2.

“It was pretty fun out there, I got a couple of good ones,” Wilcox said. “I was stoked to get the opportunity to surf against those guys in the Trials, let alone win so I’m really happy. I got a few waves out here yesterday so I knew the banks pretty well and this is my second time competing in a WCT so I just knew I had to keep calm and it worked out pretty well.”

Wilcox opened strong against his battle with the sporting icon, finding a big lefthand barrel to net an excellent 8.00 point ride.

“Kelly (Slater) had priority and I was just up the beach a little bit more,” Wilcox continued. “This left came and I just pulled into it and got a pretty good score. That got me rolling through the heat and I managed to get a couple other ones to back it up.”

Julian Wilson (AUS) 24, defending event winner, launched his 2013 campaign in Peniche with a convincing heat win in the sluggish high tide lineup. Wilson locked into a clean backside barrel to take the lead and spent the remainder of the 30-minute exchange trying to back it up.

“The waves looked fun before it started, obviously the tide is a little bit high but I think today will probably be one of the best days,” Wilson said. “I thought there was going to be a few more opportunities than what was out there, my first wave ended up being my best wave and at the time I thought it was just something to get started.”

Fresh off a Quarterfinal berth in France and sitting at No. 6 on the ASP WCT rankings coming into Portugal, Wilson kept the ball rolling and will look to put on another strong performance to solidify his position.

“I know I can do good here, I really enjoy these waves and I know what boards have worked here in the past,” Wilson continued. “I have a lot of experience cause I’ve won it here before, so I take it as a positive and will take it wave by wave. I really enjoy coming here and getting barrelled, hopefully I can get on a roll and try to defend my title.”

John John Florence (HAW) 20, back in full flight from an early season injury, capped off Round 1 with a strong performance, exhibiting his supernatural affinity with the barrel.

“There’s still little barrels out there, it’s just a matter of finding them,” Florence said. “When the tide really dropped out, it got really slow and made the waves kind of weaker, I just got really lucky. This is the last event travelling before I get home, and ending here in big barrels it’s kind of like Pipeline but on a beach, it’s pretty sick.”

When competition resumes, up first will beMick Fanning (AUS), 32, against Fancisco Alves (PRT), 20, in the opening heat of the elimination Round 2.

Event organizers will reconvene tomorrow at 7:45am to assess conditions for a possible 8am start.

Highlights from the Rip Curl Pro Portugal will be available viawww.live.ripcurl.com