SAN CLEMENTE, CA/USA (Tuesday, September 8, 2015)– The famed cobblestone break of Lower Trestles, one of the of the most high-performance waves on the planet, will host the world’s best surfers as the Hurley Pro and Swatch Women’s Pro kick off tomorrow, with a competitive window that could last until September 20.

Adriano de Souza (BRA) remains at No.1 on the Jeep Leaderboard heading into the Hurley Pro, the eighth stop on the 2015 Samsung Galaxy World Surf League (WSL) Championship Tour (CT), with only a narrow lead over his closest rival, current world No. 2 and three-time WSL Champion Mick Fanning (AUS).

“I came here a week ago to get ready and I’m feeling amazing at the moment,” said De Souza. “I had a bad result at the last event in Tahiti but now I’m just going to focus on this contest and I can’t wait for it to start — I’m hoping to make it into the Top 8. At Lower Trestles you need to demonstrate everything — airs and rail — and I’ve been training hard to give it my best.”

“Normally there are one or two guys that jump ahead on the Jeep Leaderboard at this point in the year but everyone is so close at the top, which is really awesome,” Fanning said. “It’s going to be a really good pressure cooker all the way to the end of the season. I really enjoy it here at Lower Trestles. I’ve had one win here and a few Quarters and Semis so it would be great to get another good result. It’s such a high-performance wave and there’s more than one way to get a 10 out here — you can either do huge airs or surf it perfectly.”

Defending Hurley Pro champion Jordy Smith (ZAF) has withdrawn from the event due to an ongoing injury suffered during a freesurf at the J-Bay Open. Smith has previously missed the Fiji Pro and the Billabong Pro Tahiti this year, and he is being replaced at Lower Trestles by Aritz Aranburu (ESP). Additionally, rookie Matt Banting (AUS) has withdrawn due to an injury sustained at the J-Bay Open and has been replaced by Tomas Hermes (BRA). 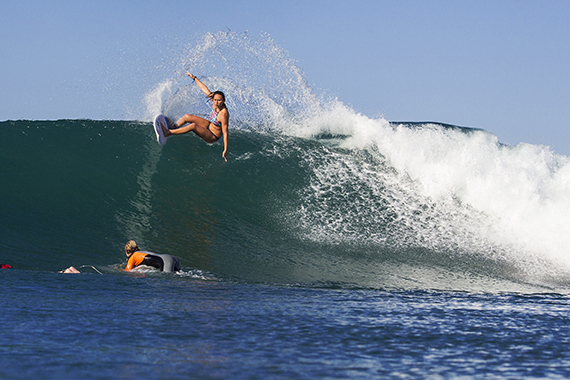 Carissa Moore (HAW), current No. 2 on the Jeep Leaderboard, will match-up against Silvana Lima (BRA)
and replacement surfer Caroline Marks (USA) in Round 1 of competition.
Image: Sean Rowland/WSL

On the women’s side, California-native Courtney Conlogue (USA) is atop the Jeep Leaderboard, just 400 points ahead of two-time WSL Champion Carissa Moore (HAW). Conlogue had a disappointing result at the Swatch Women’s Pro last year and is looking for a solid finish at Lower Trestles this season to retain her ratings lead.

“Last year’s Swatch Women’s Pro was my first event back after my ankle injury, and in hindsight I wasn’t completely recovered.” Conlogue said. “This year, I’m stronger and the combination of having the home crowd to cheer me on and having Swatch back on board as a sponsor, makes this event particularly special. The swell on tap is fantastic and I love how this wave challenges surfers — and me in particular — to take to the air, which is thrilling for both the athletes and the spectators.”

“From a points perspective, it’s super competitive,” said Moore. “There’s no room for error and everyone is definitely in top form. I’m just going to focus on myself and surf my hardest. I love Lower Trestles and it’s one of my favorite waves in the whole world. Last year I came in ninth place so anything better than that will be a great result for me.”

Reigning six-time WSL Champion and defending event winner Stephanie Gilmore (AUS) withdrew from the competition due to an ongoing knee injury sustained during a freesurf in Australia’s Margaret River earlier this season. She suffered three hairline fractures, forcing her to miss the past three Championship Tour events and leaving her at tenth place on the Jeep Leaderboard. Gilmore will be replaced by Caroline Marks (USA), currently No. 2 on the WSL North America Junior rankings. Marks will match-up against Moore and Silvana Lima (BRA) in Round 1 of competition.

“I’m only about 70% recovered from my injury so unfortunately I can’t compete at this great event,” Gilmore said. “I really don’t want to push it and I want to be fully healed before I surf competitively again. But on the plus side, I’m really looking forward to watching the women attack the wave and seeing what they do out there.”

Surfline, official forecaster for the World Surf League, is calling for:

A long run of very rippable Southern Hemisphere SW swell will prevail for the first few days of the waiting period. In addition, we now expect to see SE/SSE swell from Hurricane Linda starting as early as Wednesday afternoon/evening and continuing Thur/Fri. All swells will gradually trend down through the weekend, with a further decrease in surf for early next week. A fun size Southern Hemisphere SW swell is on track for the 16th-18th.

Alongside the WSL Top 34 and Top 17 the events will see a return of the WSL Heritage Series with a women’s heat and a men’s Expression Session. The WSL Heritage Series, which is designed to celebrate and honor the icons of the sport, will recommence at Lower Trestles for the first time this season. Surfing icons Lisa Andersen and Sofia Mulanovich will match-up during the Swatch Women’s Pro while Shaun Tomson, Wayne “Rabbit” Bartholomew, Simon Anderson, Cheyne Horan and Michael Ho will showcase their skills during the Hurley Pro.

Layne Beachley has been forced to withdraw from the women’s Heritage Heat following a recent neck and back injury.

“Regrettably I had to withdraw from competing in the Heritage Heat due to a serious injury I suffered two weeks ago,” said Beachley. “I was really looking forward to this amazing opportunity to not only reignite my rivalry with Lisa Andersen but to share that excitement with her and Sofia Mulanovich in a perfect Trestles line up  — I’m bitterly disappointed and I have no doubt Lisa and Sofia will do women’s surfing proud.”

The Heritage Series Heat and Expression Session will have opportunity to run at any point during the competition window.

Hiroto Ohhara (JPN) and Ian Crane (USA) have earned the wildcards for the men’s event after winning the Hurley Pro Trials in July. Ohhara will face Fanning and Adam Melling (AUS) in Heat 5 of Round 1 and Crane will take on ratings leader De Souza and Michel Bourez (PYF) in Heat 6. Bethany Hamilton (HAW) has been awarded the wildcard for the Swatch Women’s Pro and will take on Conlogue and Nikki Van Dijk (AUS) in the opening Round of competition.

The Hurley Pro and Swatch Women’s Pro Trestles hold a competitive window of September 9 – 20, 2015 and will be webcast LIVE on WorldSurfLeague.com and on the WSL mobile app.