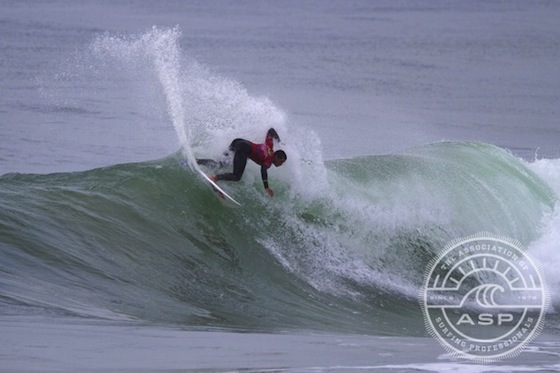 Pictured: Ramzi Boukhiam (MAR), top seed at the HD World Junior Championships, rebounded from a Round 1 loss with a commanding Round 2 heat win.

Ramzi Boukhiam (MAR), 20, rebounded from his Round 1 loss in dominant fashion, besting Brazilian Tales Araujo (BRA) ,18. The Moroccan relied on a patient approach today and would go on to dismantle the challenging Joaquina Beach lineup with ease while advancing to Round 3.

“I didn’t go too crazy in this heat,” Boukhiam said. “It’s way smaller than yesterday, but it seems like there are two swells coming from different directions, so it makes the lineup all over the place and there’s a lot of water moving. You just have to take your time and do one big hit. If you go too fast, you’re going to fall because it’s so bumpy.”

Boukhiam, who finished 3rd on the ASP World Junior Championships last season, is hunting a big result in his final junior event and hopes a successful campaign in Brazil will prepare him for the upcoming Hawaiian leg of the ASP Qualifying Series.

“It’s my last year in the Junior and I really like it here in Brazil,” Boukhiam said. “The waves are difficult, but you have to be smart and I’m looking forward to a big result, but I’m taking it heat-by-heat. There’s really no pressure and this event is a good warm up for Hawaii and the end of the season.”

Michael Rodrigues (BRA), 18, trialist at the HD World Junior Championships, was electric in Round 2 today, unloading a flurry of tail-free turns and lofty airs. The Brazilian upstart’s efforts would secure the highest scores of competition, including 9.57 single-wave score and 18.07 heat total.

“I’m so happy to win that heat,” Rodrigues said. “After losing yesterday, I went home and thought about everything I did wrong in my heat and it felt good to surf well today. I moved here to Florianopolis eight months ago and I feel comfortable out here at Joaquina.”

Ian Crane (USA), 20, donated a strong performance in his Round 2 match-up against Australian Jack Duggan (AUS), 18, delivering powerful combinations on the Joaquina Beach rights and lefts to amass one of the day’s high heat totals of 15.00 while securing a position in Round 3.

“The heat before mine started getting better and I was happy to get on some good waves,” Crane said. “Yesterday was tough for me. I think I had a four-point heat total and it was really difficult, because I thought those conditions suited me better than today. I was bummed that I didn’t take advantage of those conditions.”

The Californian was relieved to have a successful heat after a low-scoring Round 1 start and is out to post a big result in his final ASP Pro Junior event.

“I was almost a little embarrassed after yesterday with such a low heat total,” Crane said. “Today I was really nervous. I didn’t want to lose early, it would have been the worst thing ever. I was nervous at the start and then kind of loosened up. Then I got that 8, so I was happy.”

Hiroto Arai (JPN), 18, contributed to a strong showing from the Japanese contingent, combining strong outside turns and committed combinations on the inside reform to advance to Round 3.

“I tried to get one or two good turns on the outside and then the link up,” Arai said. “If you can get that good inside reform you can get some good turns in. For the first 10 minutes, I was catching small waves that didn’t connect. After that I waited for the ones with the reform. After I got that 6.5, I felt like I could relax a little. I was a bit nervous at the start of the heat.”

Arai, a four-year veteran on the ASP World Junior stage, has been unable to find his way out of Round 3 in previous seasons, but is striving for a strong result at the 2013 HD World Junior Championships.

“I’m so happy to make it though to the next round,” Arai said. “This is my fourth time at the World Juniors and I always lose in Round 3. I hope I can get through that round and hopefully move through Round 4 and the Quarters.”

Following the completion of Men’s Round 2 action, HD World Junior Championships Women’s competition would take to the water for the first time, completing Round 1 in offshore two-to-four foot waves.

“That heat managed to go my way,” Buitendag said. “The girls were meant to start about for days ago, so I think all the girls were excited to get out there. It’s a difficult wave to surf, but I managed to get one wave that opened up and got the 8 for two turns.”

Following a successful opening season among the ASP Top 17, Buitendag is taking a relaxed approach to Florianopolis and is out to enjoy her time at the ASP World Junior Championships.

“The ‘CT was my main aim this year and it’s really intense, but I think I had a good season,” Buitendag said. “I’m really happy and I’m excited for next year. After this, I’m going to go home and relax for a few months and see my friends an family. I’m really stoked with how my year has gone.”

Mahina Maeda (HAW), 15, was another top seed to take out a dominant Round 1 victory. The young Hawaiian took an impressive equal 5th place finish in last year’s ASP World Junior event in Bali and is hungry to clinch the prestigious ASP World Junior crown this year.

“It was really challenging, but I had a fun time,” Maeda said. “Me and Dax (McGill) have been surfing here waiting for the call and surfing every wave possible. It’s been a great day to surf and have fun with my friends. I did the world juniors last year and got fifth and I’d like to improve on that result and hopefully make the final and maybe get a World Title.”

Event organizers will reconvene at 7:30am local time for a possible 8am start to competition.