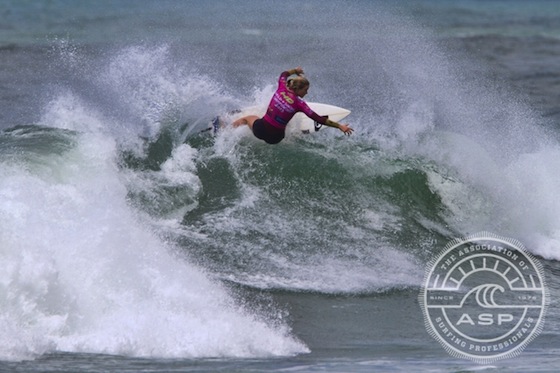 The 2013 ASP World Junior Championships not only offers up a prestigious title, but crucial placement in to ASP Qualifying Series events. Men’s top four finishers are guaranteed placement in all 2014 ASP Prime events while surfers finishing fifth through eighth earn a Round 1 berth in all ASP 6-Star events. For the women, a top four finish guarantees a position in to the Round of 60 in all ASP 6-Star contests.

Tatiana Weston-Webb (HAW), 17, would take on fellow Hawaiian goofy-footer Dax McGill (HAW), 15, in the opening Round 3 match-up. Weston-Webb, who is competing in her first ASP World Junior Championships, would get the best of a series of exchanges on the lefthanders of Playa Joaquina, combining committed outside turns with strong finishing maneuvers to secure a Round 4 berth and the day’s high heat total of 16.50 out of 20.

“Having Dax (McGill) in my heat was kind of a bummer, but we always want to beat each other,” Weston-Webb said. “It gives you that little boost of wanting to win and I think I came out with better priority situations and was lucky enough to get the two good set lefts. I was lucky to get two turns on the outside and connect them to the inside.”

Weston-Webb has put together a banner 2013 season, finishing at No. 12 on the ASP Women’s World Ranking and just shy of a berth among next season’s ASP Top 17. The Hawaiian talent is carrying new-found confidence following her global success this season and hopes to cap off her year with a top result at the ASP World Junior Championships.

“Almost qualifying for the 2014 World Tour caught me by surprise,” Weston-Webb said. “I really didn’t think that I’d get that close and that gave me a really big confidence booster. It feels really good to have the results under my belt. Now I’m going to go in to the 2014 year on the QS with the confidence of knowing I can get results.”

Mahina Maeda (HAW), 15, continued to assert herself among the world’s finest up-and-coming talent with a commanding Round 3 victory over Brazilian Marina Rezende (BRA), 18. Maeda, currently competing in her second career ASP World Junior Championships, has matched her 2012 result with a Quarterfinals berth and has set her sights set high at Joaquina Beach this year.

“This is my first time in Brazil and it’s a great experience to come around the world and compete in different conditions,” Maeda said. “This wave is a unique wave and it suits all types of talent whether you’re an aerialist or you like big carves. It’s a beautiful day and I’m just happy to be here competing with the best junior girls. Hopefully I can keep going and take it to the final and win the World Junior Title.”

“I think on the lower tide it breaks more out the back, but when the tide comes up it’s hard to get those turns out the back,” Buitendag said. “It was a total change of environment out there today and I was trying to work it the best that I could.”

Johanne Defay (FRA), 19, ASP European Junior Champion and recent qualifier for the 2014 Women’s WCT, has also quietly navigated her way to the Quarterfinals. The French talent has been building momentum throughout the event and hopes to peak in the final rounds.

“I’m happy to get through that heat,” Defay said. “There were some good waves, but you just have to catch them. It’s a bit tricky. The lineup is really big and I’m getting lost a bit. I need to pick a point on the beach to line up on, but I’m getting a little more comfortable out there and hope I can continue to build on my performances towards the final.”

Following the completion of Women’s competition, HD World Junior Championships Men would return to complete the first eight heats of Round 3. The afternoon would host some incredible performances from the international field, with up-and-coming talent and Pro Junior veterans contributing to the afternoon’s action.

Michael Rodrigues (BRA), 18, who earned the event’s high scores in Round 2, continued to assert his dominance again today. The Brazilian upstart would stick to his explosive forehand in Round 3, amassing the day’s highest single-wave score of 9.63 out of 10. Rodrigues would put on an impressive display during his near-perfect ride, delivering a fins-free turn combined with a forehand wrap completed with an air-reverse.

“I knew it was going to be tough,” Rodrigues said. “Navarro (Matheus Navarro) is a very competitive guy and we’ve surfed against each other a lot in amateur championship events. I felt good going in to the event and I was focusing on the airs on the rights. When the waved popped up, I knew I had to make it. I’m getting closer to that perfect 10 and making it to the end of the event.”

Matt Banting (AUS), 18, who was a standout in Round 1, continued his successful run at Joaquina Beach with a victory over Hawaiian Seth Moniz (HAW), 16. Banting wasted little time in his winning heat, opening his affair with a strong 8.17 point ride and would solidify the victory with a 7.17 to advance to Round 4.

“I was happy to get that 8 right off of the bat, especially with the young little dynamite (Seth Moniz) coming through,” Banting said. “His ASP World Ranking doesn’t justify his talent at the moment,so I knew it was really tricky and there weren’t many waves coming through. We only had three or four waves each to try and consolidate on. I knew every wave I had, I couldn’t fall off. I was a little nervous going in to it, but feeling good. Every surf I’m having out here I’m feeling more comfortable.”

Juninho Urcia (PER), 18, would deliver the biggest upset of the day, eliminating 2011 ASP World Junior Champion Caio Ibelli (BRA), 20, via a hard-fought Round 3 battle.

Reo Inaba (JPN), 16, would contribute to today’s upsets. The Japanese talent would take to his forehand while securing a Round 4 berth, unloading powerful forehand arcs on the Joaquina lefts to eliminate South African standout Michael February (ZAF), 20.

“I’m super happy to get that win,” Inaba said. “These waves are similar to Japan so these conditions are comfortable to me. It feels good to get a couple of heat wins and I’m excited for the next round.”