Six to eight foot (2 metres plus) dangerous barrels exploded onto razor sharp reef, putting the 32 tube riding specialists to the test, as Tuamata Puhetini and Nathan Hedge (AUS) finished 1st and 2nd respectively to win wildcards into the prestigious Billabong Pro Tahiti. But with the reward came the risk — Kevin Bourez (PYF), younger brother of ASP WCT No. 5 Michel Bourez, suffered an horrific wipeout, going head first into the reef. The doctor informed event organisers that Kevin is in a stable condition, following four hours of surgery from multiple head fractures as well as deep facial lacerations. He’s being monitored closely and more information about his injury and recovery will be available in the next 24 hours. Despite leaving the event in an ambulance, Kevin won the heat and was one of the favourites to win the Air Tahiti Nui Billabong Pro Trials.

Tuamata Puhetini was ecstatic after his big win, repeating his heroics that saw him win the Trials in 2010. Puhetini was eliminated by Mick Fanning in Round 2 last time he was in the Billabong Pro Tahiti, but on current form he’ll push the Top 34 to their limits this time around. Puhetini used precision and poise to catch solid sets and thread deep tubes to tear through the tough field of competitors and secure the coveted Air Tahiti Nui Billabong Pro Trials win.

“The surf was fantastic today!” Puhetini said. “I can’t believe I won it again, everyone was surfing very well. I won the Trials in 2010 and it was a great experience, and I’m really looking forward to taking on the best guys out there in the Billabong Pro.” 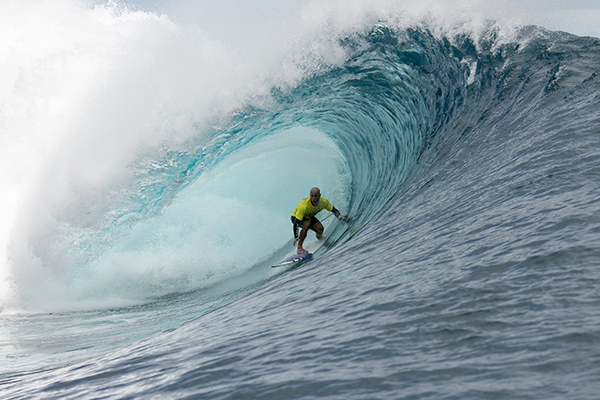 North Narrabeen’s Nathan Hedge is one of surfing’s journeymen, a former ASP WCT Top 10 surfer who’s once again climbing the ASP Qualifying Series rankings. Today’s result will see Hedge get the chance to re-joint his peers at the elite level at the Billabong Pro Tahiti and will see him attack the rest of the year’s QS events with newly found confidence and form.

“It was a day for the Tahitians with Tuamata (Puhetini) taking the win,” Hedge said. “I’m really stoked to have made the final. I got some of the best waves of my life today, it’s like a dream. It’s a big risk coming here for the Trials, there’s only one spot for internationals surfers up for grabs, and I got it. It was a magical day, this is why we surf. My thoughts and prayers go out to the Bourez family. Kevin loves to charge, he’s amazing kid and surfer and I’m  wishing him a full recovery and may he return to the ocean some time soon.”

The journey won’t get any easier from here as the two wildcard winners will go onto face ASP WCT Nos. 1 and 2 Gabriel Medina (AUS) and Joel Parkinson (AUS) in Round 1. You can bet that the Top 34 surfers on the WCT were paying close attention to the trials as the Air Tahiti Nui Billabong Pro Trials winners have a great track record of going on to eliminate a handful of the world’s best in main draw of the Billabong Pro Tahiti.

The Billabong Pro Tahiti will run from Aug 15 – 26. More information available via ASPWorldTour.com