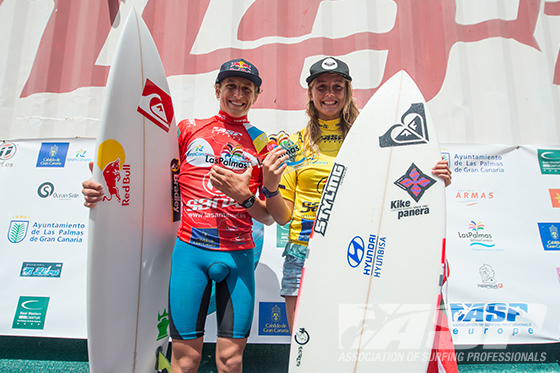 Pictured: A surprised and ecstatic winner Tomas Hermes, on the podium of the SATA Airlines Azores Pro.

Hermes, has been the giant killer in this event, eliminating successfully Miguel Pupo (BRA), Filipe Toledo (BRA) and Mitch Crews (AUS) before finally taking the edge over Melling in the final heat of the event. A complete surfer with polished power turns and an incredible ease in the air, Hermes nets his first ever major win on the ASP circuit and bumps up to the 34th spot on the World Rankings.

“I feel incredible, this is the best day of my life for sure, my first win on the ASP World Tour,” Hermes stated. “Brazilians must have something special going on here in Azores, I’m stoked to be the third to win here ! I was feeling super confident here I trained everyday after the contest and felt comfortable and the work has paid off. I’m focusing on surfing good and not on rankings, I’m taking things one heat at a time and I’ll continue to do so in the next event in Carcavelos !”

With this major win in an ASP Prime event, Tomas Hermes has jumped all the way up to the 34th spot on the ASP World Rankings, and has taken an early lead in the Portuguese Waves series, a series of three events that include the Rip Curl Pro Peniche and the Cascais Pro next month. The winner of the series, determined off of the two best results, will cash in an incredible $50,000 prize !

Adam Melling (AUS) 28, currently ranked 27th on the World Championship Tour, placed runner-up today at the SATA Airlines Azores Pro, unable to find the lefthanders he has been ripping all week, when came the final. A powersurfer amongst the crowd of younger aerialists, Melling dominated with his signature radical turns on waves of all sizes and shapes.

“It’s a bummer that we didn’t get many waves at high tide, but I’m pretty happy, Tomas got me on that first exchange, that’s what set him up,” Melling said. “I like powersurfing and if you can do big turns on a small wave they’re going to love it so that’s what I was trying to do. I really wanted to get on the podium this time and get a positive vibe going through the next few events through Europe, it’s a good start and I’m looking forward to the next !”

Kolohe Andino (USA) 19, started his day with an excellent 9 point ride on his very first wave, a long and clean lefthander that offered multiple sections. He unfortunately fell short of finding a similar opportunity in his semi-final, where a last minute exchange gave the win to Adam Melling. The young Californian places equal 3rd in Azores and solidifies his lead on the World Rankings.

“I think I blew it, there were some good waves after his,” Andino analysed. “But I’m stoked for Melling and I hope he wins ! I wanted to finish the year with a win, but a third’s cool and there are a lot of events left so I’ll have more opportunities. I’m going to concentrate on the WCT now and hopefully I won’t even need my world rankings points to finish the year. I’ve been on the road a lot this year so I’ll probably won’t do the second Prime in Portugal but I’ll surf the Triple Crown for sure.”

Mitch Crews (AUS) 23, was leading his semi-final for most of the duration but committed a mistake dealing with priority, and let Hermes have a go at a better wave and eventually fell short of finding the average score he ended up needing to advance into the final. With this second 3rd place result this season, Crews jumps up the rankings a few spots and looks very determined to finally reach the coveted ASP World Championship Tour.

“I’m really angry, I just lost that heat because I gave him priority and he got the score and I’m super upset,” Crews stated. “Nerves just got to me I can’t believe I made a mistake like that. I really wanted to get passed that semi-final mark, I had every opportunity to do it in this event, but yes it’s been great and I’m stoked to get another great result.”

Joan Duru (FRA) 24, placing 9th in the SATA Airlines Azores Pro has taken a short lead on the European rankings ahead of Guadeloupe’s Charles Martin before the last event of the European season, the upcoming Cascais Pro, third stop of the Portuguese Waves Series.

To access our complimentary high-res images, please go to
http://www.aspeurope.com/press-room/