BARRA DA TIJUCA, Rio de Janeiro/Brazil (Sunday, May 17, 2015) – An electrifying final day at the Oi Rio Pro, the fourth stop on the Samsung Galaxy World Surf League (WSL) Championship Tour (CT), saw Filipe Toledo (BRA) and Courtney Conlogue (USA) reign supreme, claiming victory at Barra da Tijuca in front of a capacity crowd of thousands and thousands of passionate fans. Toledo defeated Bede Durbidge (AUS) to win the men’s event while Conlogue got the better of Bianca Buitendag (ZAF) to claim the women’s event, each securing their second CT win of the season and putting themselves firmly in the world title race.

Filipe Toledo (BRA) claimed the second CT victory of his career today following his inaugural win at the Quiksilver Pro Gold Coast at the start of this season and continuing his exceptional run of form with a win at the WSL Qualifying Series 10,000 event in Lower Trestles earlier this month. Previously at third place on the rankings, the result sees Toledo move up to second place on the Jeep Leaderboard behind Adriano de Souza (BRA). The blistering aerial maneuvers of the young Brazilian in each Round of the competition kept the fans enthralled and Toledo was on top form throughout the event, winning each of his heats en route to Final with consistently high heat totals.

“I don’t know what to say,” said Toledo. “The first thing I did was cry because look at the crowd, I’ve never seen anything like that before. It’s been such a blessed week and I have such amazing friends and family. I need to be grateful for everything I have and everything God has done in my life.”

“It’s been my dream to win this contest here and since the year that I qualified I’ve been dreaming of this day,” continued Toledo. “I’m feeling really confident right now. It’s going to be a really amazing year for me and the Brazilians and I’m hoping to finish in the top 5 and fight for the title at the end of the year.” 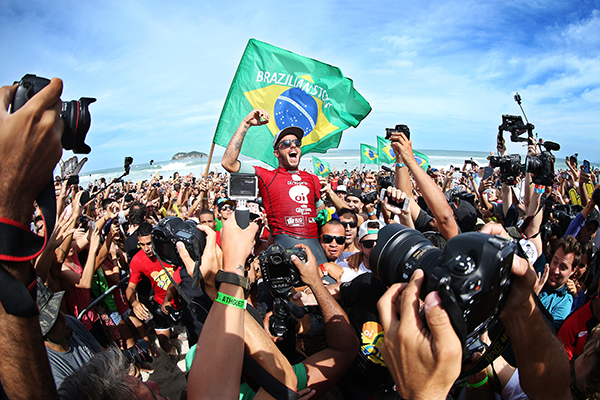 A huge aerial rotation from Toledo early in the heat earned him a Perfect 10, his second of the event, to begin his domination of the Final. The landing creased his board but after an equipment change he continued to look unstoppable, posting an 8.33 for his impressive rail surfing. Toledo bettered his position with another air reverse and an 8.53 for a formidable 18.53 heat total. Durbidge was left in a combination situation and, despite a solid 7.60 and 7.10, he was still in need of two excellent scores get back into the heat. Toledo’s go-for-broke performance couldn’t be matched and he stormed to victory, sealing the deal with a near-perfect 9.87 and the highest two-wave heat total of the entire competition, a 19.87 out of a possible 20.

“The Brazilians have really started the year well and that’s really given me so much confidence,” Toledo said. “It was so crazy when I was trying to get my back-up board and there were just so many fans. Big congratulations to Bede (Durbidge) and to Bianca (Buitendag) and Courtney (Conlogue), you’ve all done such an amazing job and are such great surfers.” 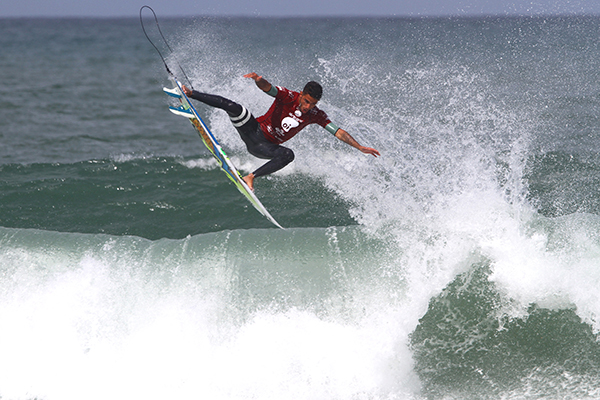 Filipe Toledo (BRA) posts a Perfect 10 to secure his victory in Brazil.

Tour veteran Bede Durbidge (AUS) has been part of the Top 34 since 2005. The result today is his best since 2010, where he made a Final at the Rip Curl Search event in Puerto Rico, and moves him up one place to 10th on the Jeep Leaderboard. Durbidge previously defeated Matt Wilkinson (AUS), Josh Kerr (AUS) and Keanu Asing (HAW) before facing Toledo in the Final.

“It’s amazing this crowd and I knew it would be a tough heat here against Filipe (Toledo),” said Durbidge. “I knew he’d take it to me straight away and he did with that 10. I just had fun at the end and enjoyed this crowd and Rio. Filipe is only 20 and he’s going to be hard to stop but it feels good to be back on the podium so I’m stoked. This definitely gives me more confidence. It was my goal this year to get back on the podium and win an event. This is a good stepping stone and hopefully next time I will win.”

Courtney Conlogue (USA) claims the third CT win of her career and her second of 2015 after taking victory in Margaret River last month. Back-to-back event wins see her retain second place on the Jeep Leaderboard and close the gap on ratings leader Carissa Moore (HAW), who also has two wins this season. Conlogue has been on tour since 2011 and today marks her best result in Brazil. The American previously dispatched Tyler Wright (AUS), Malia Manuel (HAW) and Tatiana Weston-Webb (HAW) en route to the Final.

“The passion of the Brazilians is unbelievable,” said Conlogue. “They’ve been screaming and it really makes me want to do well. I haven’t ever had two wins in a season so it’s a great start. I’m feeling good and I want to keep this momentum going into Fiji. I can’t wait for that wave, I haven’t surfed it since I was 11 and it’s going to be so fun.”

“The hard work is definitely paying off and the injury last year really made me reflect and see just how much I want it,” continued Conlogue. “I really broke everything down and why I do what I do. I’m just enjoying what I’m doing right now and I’m so happy to be able to surf in these events and give it my best performance. We’ll see how that goes for the rest of the season, who knows.” 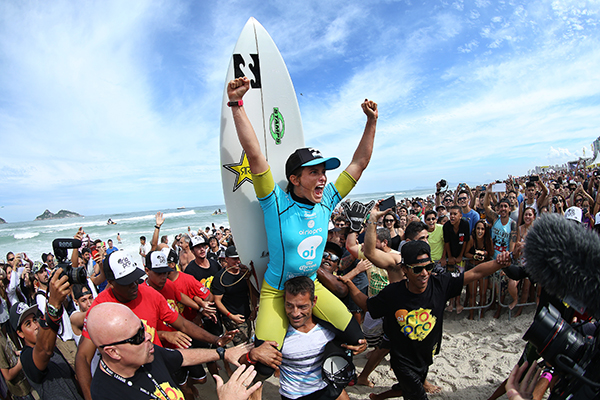 Conlogue got off to a powerful start in the Final to put Buitendag in a combination situation with less than ten minutes gone. Her 13.67 heat total held through the heat and the South African struggled to find any scores of consequence, while Conlogue went on to improve her position with a 7.33. In the final minutes the South African came back with a 6.27 but it wasn’t enough to break the combination and Conlogue took the win.

“I’m surfing with my heart right now,” Conlogue said. “I’m so happy to be here and so thankful to have such passionate fans here on the beach. I’ve taken a different approach recently and I’ve changed things up which really worked. I can’t be more thankful for where I am and I really hope I have a chance at the world title this year, let’s make it happen.” 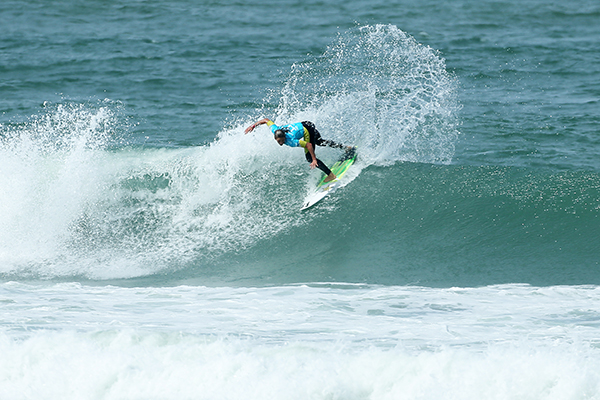 Today marks the second CT Final appearance for Bianca Buitendag (ZAF), following her 2014 match-up with reigning six-time World Champion Stephanie Gilmore (AUS) at Snapper Rocks. 2015 is her third year on tour and the result today shows steady improvement this season and sees Buitendag move up two places on the rankings to 9th thanks to the 8,000 points she receives as runner-up. To reach the Final the South African had to take down ratings leader Moore, Lakey Peterson (USA) and 2014 event winner Sally Fitzgibbons (AUS).

“I’m blown away by the passion that the Brazilians have,” Buitendag. “It’s such a privilege to be here and I just want to say thank you to everyone that came down. I’m not that familiar with going left so it’s been a big surprise for me how far I’ve come in this event. I’m so grateful to be here and be able to do what I love every day.”

Rookie Italo Ferreira (BRA) faced eventual event winner Toledo in the Semifinals and was defeated decisively by his compatriot. Toledo secured a 15.93 heat total before Ferreira even had the opportunity to post a score. The rookie couldn’t recover and takes home a third-place finish, the best result of his career, and sees him leap up to equal 11th place on the rankings.

“I’m so happy to get third place in the event,” said Ferreira. “The next event is Fiji and I’m stoked to go there. Thanks to everyone for supporting me and congratulations to Filipe (Toledo) who’s been surfing amazing – I hope he wins the event.”

Two-time World Champion and last year’s event runner-up Carissa Moore (HAW) was eliminated during the Semifinals by eventual runner-up Buitendag. The pair traded small scores through the heat and Moore held the lead. With minutes remaining the South African’s patience paid off and she found the wave of the heat to post a 7 and overtake Moore. Using priority to block the Hawaiian, Buitendag was able to hold off Moore and secure her place in the Final. The result sees Moore retain the Jeep leader jersey and first place on the rankings heading into Fiji.

“I didn’t really have a good rhythm and I wasn’t really finding the big open ones so I think that was my biggest mistake,” said Moore. “All competitors shoot to win every event and be in a good lead but I think it’s awesome for the sport to have competition. It definitely keeps me on my toes and has me working harder. These girls are surfing so well that it’s never going to be easy. Fiji is a really challenging wave and I didn’t have the best showing there last year so I’m looking forward to improving on that.”

Highlights from the Oi Rio Pro are available at WorldSurfLeague.com