TEAHUPO’O, Tahiti (Sunday, August 16, 2015) – Action at Stop No. 7 on the 2015 Samsung Galaxy World Surf League (WSL) Championship Tour (CT), the Billabong Pro Tahiti, continued today with the remaining heats of Round 1 followed by Round 2. The world’s best surfers battled at Teahupo’o to avoid early elimination and progress on in the competition.

Round 2 got underway with Jeep Leaderboard No. 1 Adriano de Souza (BRA) taking on trials winner Taumata Puhetini (PYF). A strong showing from the Brazilian netted him a 16.26 heat total and left the local wildcard in need of an excellent 9.39 to take out the world no. 1. Puhetini couldn’t find the score and De Souza moves on to Round 3 where he will face another dangerous wildcard, Bruno Santos (BRA).

“For me this has been a really tough event in the past,” De Souza said. “In the last four years I’ve come up against the wildcards and haven’t done so well. I’ve been working every single year – I’ve been coming early and staying later and watching a lot. I still need to work so much but I’m really proud to make that heat against an amazing Tahitian. The next heat will be against a friend, Bruno (Santos).”

Reigning WSL Champion and defending event winner Gabriel Medina (BRA) found his form today and dominated his Round 3 heat against Ricardo Christie (NZL).The rookie drew first blood but the Brazilian answered back with an excellent 9.17 and found a back-up 8.33 for an unstoppable 17.50 heat total. Christie, who injured his back during a freesurf on Saturday, couldn’t keep pace and was eliminated in 25th place. Medina will face John John Florence (HAW) in an all-star Round 3 match-up.

“That was a fun heat and I got a lot of waves,” said Medina. “Since I got here I haven’t got barrelled so it felt good to get some in my heat just now. Last year was last year, this year I’m just focused on my thing and making as many heats as I can. I’m excited for the rest of the contest but I know my next heat will be tough because of my seeding. It was my dream to be a World Champion and that dream came true. This year I’m not feeling any pressure and just want to surf.” 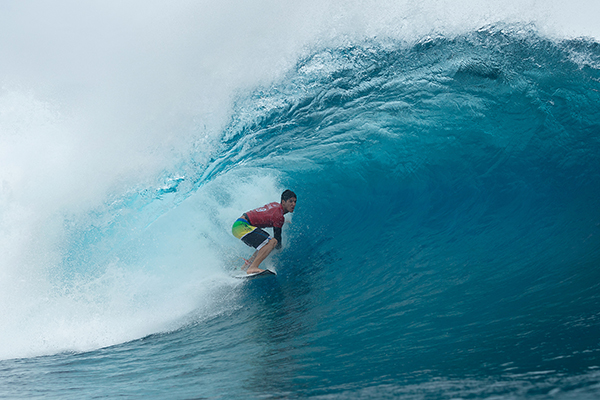 Caption: Reigning WSL Champion Gabriel Medina (BRA) recovered from a Round 1 defeat to sail through his Round 2 heat and avoid elimination.
Image: WSL / Kelly Cestari

Earlier in the day Medina was send to elimination Round 2 by rookie Italo Ferreira (BRA) in Round 1 Heat 10. An exciting exchange saw the Brazilian goofyfooters battle for the lead and Ferreira came out on top, taking a narrow victory over Medina.

“I’m so stoked to make my first heat with Gabriel (Medina), he’s a great competitor,” Ferreira said. “At the start of the heat I got one wave on the inside and went right into the reef. I just tried to stay focused and I knew I had to get back out to the lineup. It’s my first time here and today it’s slow but really fun.”

A high-scoring battle played out between C.J. Hobgood (USA) and Nat Young (USA) in Round 2 Heat 3. Both surfers had excellent 8-point rides on the board but Young’s backup 7.97 gave him the edge. Young increased his lead with an 8.43 but a committed, late drop from Hobgood wowed the judges and earned him a near-perfect 9.80, the highest heat total of the event and his first man-on-man heat win of the season.

“I was just stoked that I got a couple of opportunities,” Hobgood said. “The waves turned on and we both made the most of it. I made a man-on-man heat and it was fun and I really enjoyed it. When someone asks me what I’m going to miss about the tour it’s that – the man-on-man combat. I’ll also really miss all the guys on tour that I’ve travelled around with for years.”

Brett Simpson (USA) looked fired up in his match-up against Tour veteran Taj Burrow (AUS). The Huntington Beach (CA, USA) local secured his first Round 2 win of the season with an excellent 9.17 to upset the current No. 8 on the Jeep Leaderboard who leaves the competition in 25th place.

“The heat before was really exciting and it got me fired up,” Simpson said. “I was able to find a couple and I’m stoked. I feel like I’m capable and I know which waves I want to ride. I’ve been watching others out here and try and learn from them. Taj (Burrow) was my favorite surfer when I was a kid so I’m stoked to beat him but I’ve still got a lot of work to do.”

Another Brazilian in fine form today was Jadson Andre (BRA) who powered through Round 2, eliminating Tahitian Michel Bourez (PYF). Andre looked energetic in the afternoon conditions and stayed busy to find the best two waves of the heat and earn a pair of 8-point rides for the win.

“I had a really fun heat and it was great to surf a fun Teahupo’o with just one other guy out there,” said Andre. “Everybody knows I love this place so much. Michel (Bourez) is a local so I knew he would be a tough guy to beat, he just had a really tough heat. I tried not to put too much pressure on myself and I thought about just going out there and enjoying myself. I was frothing out there.”

Earlier in the day competition ran through Heats 9 to 12 of Round 1 with Josh Kerr (AUS), Italo Ferreira (BRA), John John Florence (HAW) and Jeremy Flores (FRA) earning the direct advance to Round 3.

John John Florence (HAW) returned to competition today after a two-event absence due to an ankle injury and steadily built his scoreline throughout the bout with a series of deep barrels, technical late drops and backhand carves. Florence netted two excellent scores, a 9.03 and an 8.93, for a 17. 96 heat total and a return to form. Despite keeping busy Fredrick Patacchia (HAW) couldn’t catch the young Hawaiian and went on to lose out to Matt Wilkinson (AUS) in elimination Round 2, while Bede Durbidge (AUS) got the better of Glenn Hall (IRL) to earn his place in Round 3 alongside Florence.

“It’s actually really fun out there and there’s lots of waves coming through,” Florence said. “I had a lot of fun. I was so excited to get the jersey back on. When I first got hurt I was super bummed out but at the same time I thought it would be good to take a break. When Fiji came around I couldn’t bear to watch it because I was so bummed out. My ankle feels so good and I really took my time letting it heal. I’m so excited to be back in the event and be surfing again.” 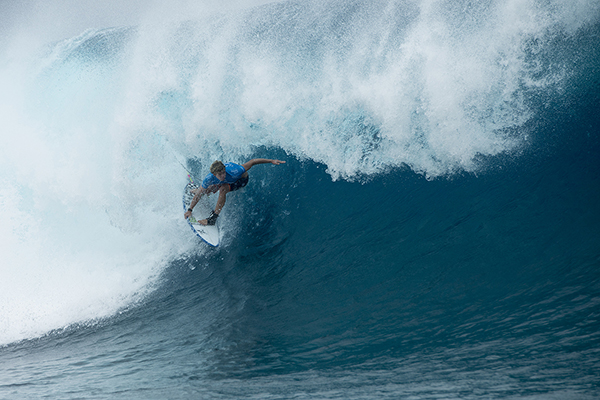 Josh Kerr (AUS) put on an impressive display in Round 1 Heat 9 against Kolohe Andino (USA) and Wilkinson. The trio traded tube rides and lead changes for the opening half of the heat. Andino, who kept busy through the bout, held the lead with a 7.17 until Kerr found the wave of the heat, pulling into a long barrel and coming out on the dry reef for a near-perfect 9.67. He backed it up with a 7.50 for a convincing win and a pass into Round 3. Wilkinson went on to defeat Patacchia in Round 2 while Andino was eliminated by Brazilian rookie Wiggolly Dantas (BRA).

“That one wave was pretty crazy and I pulled up into dry reef,” said Kerr. “I would never have stayed on that wave in a freesurf. I just wanted to make sure I got the score but I might need a new set of fins.”

When competition resumes, up first will be Filipe Toledo (BRA) and Brett Simpson (USA) in the opening heat of Round 3.

Event organizers will reconvene tomorrow at 7 a.m. to assess conditions and make a call for competition.

The Billabong Pro Tahiti runs from Friday, August 14 to Tuesday, August 25, 2015 and is webcast LIVE at WorldSurfLeauge.com and via the WSL mobile app.

The world’s best surfing is also broadcast LIVE on Fox Sports in Australia, MCS Extreme in France, EDGE Sports in China, South Korea, Malaysia and other territories and on Globo TV in Brazil.