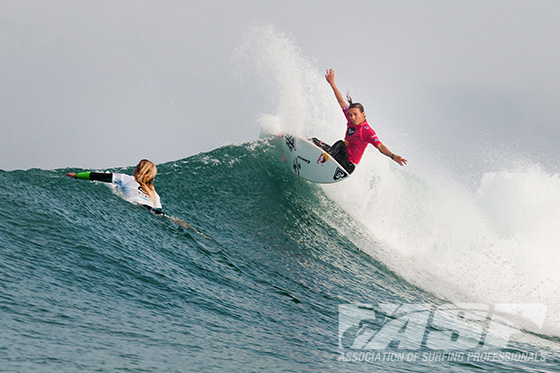 Penultimate event on the 2013 ASP Women’s World Championship Tour, the Roxy Pro France marks Fitzgibbons’s first event win this season. An absolute standout today, Fitzgibbons was the first surfer to net a perfect 10 in France, and holds three of the highest wave scores of the event.

“I’m so stoked, it’s been a long road this year and I wanted to finish strong,” an ecstatic Fitzgibbons stated. “In that final we switched peaks and I was just sorting things out when she got that 10, and I couldn’t hear anything after that. I got that last good one and I was hoping it would be enough. It’s the most amazing feeling ! I’ve got my brother and my dad here and all my family watching online, they’ve been there for me every step of the way !”

A dominant surfer in previous heats where she comboed her opponents several times, Fitzgibbons had to fight through a tight back and forth battle in the final when Wright caught an inside righthander to score the only other perfect 10 point ride of the event.

“It was a tricky situation, I had priority and a sneaky right came in and I was looking for the lefts,” Fitzgibbons continued. “She went for it and really stepped it up, I saw her do that little air out the back and I thought game on I got to do something big now ! Patience and perseverance and just keeping your head down, I kept going and I’m just so happy !!”

Tyler Wright (AUS) 19, consistently advanced through the rounds to earn her spot in the final. Off to a great start in the opening minutes of the exchange, Wright was chasing an excellent score when she found the little righthander that earned her a perfect 10 point ride. Suffering another assault from Fitzgibbons, she unfortunately couldn’t find a last opportunity to ameliorate her backup of a 7.00 point and eventually placed runner-up.

“I didn’t really have expectations, I’ve come here to surf, have fun and enjoy myself !” Wright said. “It was awesome to see Sally go out there and win her first event this year cause I know it means a lot to her, and she surfed awesome, definitely the standout of the event. She smashed it and that’s great for our sport to have a surfer like her on tour.”

Posting a third runner-up finish on the board, Wright consolidates her current second place on the rankings and sits an incredibly low 200 points behind current leader Carissa Moore, making for a spectacular finish next week in Portugal.

“I don’t plan on doing anything special like that I just do it, it’s the way I surf. That was a really entertaining final with Sally getting that last one too. The points and numbers don’t really matter to me, they never have. I’m just here surfing and having fun that’s what I do best. This year was never about that, I’m just happy to be on tour and living the life I live !”

Carissa Moore (HAW)21, placed equal third today, adding yet another excellent result to her season tally, and will be looking to finish strong in Portugal to keep her dream of a second World Title alive. The powerful Hawaiian who earlier today defeated local surfer Pauline Ado (FRA), couldn’t match Fitzgibbons’s sizzling form in their semi-final matchup.

“Of course I’m bummed I wanted to make the final and have a strong performance, but that’s competition I just have to stay happy and focused and get excited for Portugal,” Moore stated. “I think the biggest key to winning in a place like this is being able to adapt very quickly cause it’s always changing out here. I didn’t find the waves that really built up and allowed for good surfing.”

Lakey Peterson (USA) 19, reached the semi-finals for the second time this season, narrowly defeated byTyler Wright. One of the most progressive surfers on the Women’s World Championship Tour, Peterson put on a spectacular show for the French crowds and took things to the air in a promising preview of what the future of women’s surfing holds.

“I’m just a little bummed the waves did not cooperate in that last heat, the tide got a little to low,” Peterson said. “But I had fun, it’s nice to get a good result it’s been a little while. I love it here in France, now I can just enjoy it a little bit and head to Portugal for the last event of the year. I might stick around and surf a little more here, and watch the guys tomorrow, we’ll see it’s my birthday so I kind of want to hang out.”

The Roxy Pro France will be webcast LIVE via  http://roxylive.com/roxyprobiarritz/2013