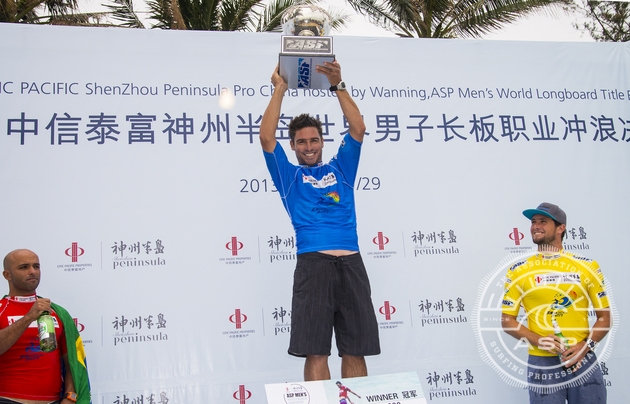 Clemente trailed Rodrigo Sphaier (BRA) throughout the final but in the dying minutes while holding priority, he was presented with an excellent set wave which he went on to score the final’s top scoring ride of a 7.5 out of 10 to steal the win, on a scoreline of 13.60 to 12.25.

“It felt for me like I was meant to win today” said an emotional Clemente after the final.

“All my three heats today, Quarters, Semi and Final, I trailed and it was my last wave that got me through. In the final I sat there nervous in the last minutes but confident a wave would come to me and again it happened – It felt like God was on my side today.”

Rodrigo Sphaier had been the stand-out surfer throughout this event consistently posting outstanding rides throughout all rounds but the stocky Brazilian was not at his best during the final.

“I am very happy for Piccolo but I’m very disappointed to lose the final” said Sphaier.

“All event I felt really good on the great waves here in China but in the final it did not happen for me.”

Antoine Delpero from France was eliminated in his see-sawing Semi Final by Clemente.

“It’s been a fantastic event and the waves have been amazing the last few days” said Delpero.

“Third is OK but I would have liked to make the Final because the Semi was so close.”

“The overall performance level here was incredible so I can’t be too unhappy with 3rd place. It’s better than 5th last year and I’m looking forward to coming back here next year” said Ingleby.

Chinese Government Officials expressed their appreciation to the ASP, surfers and media and were looking forward to a bigger and better event for 2014.