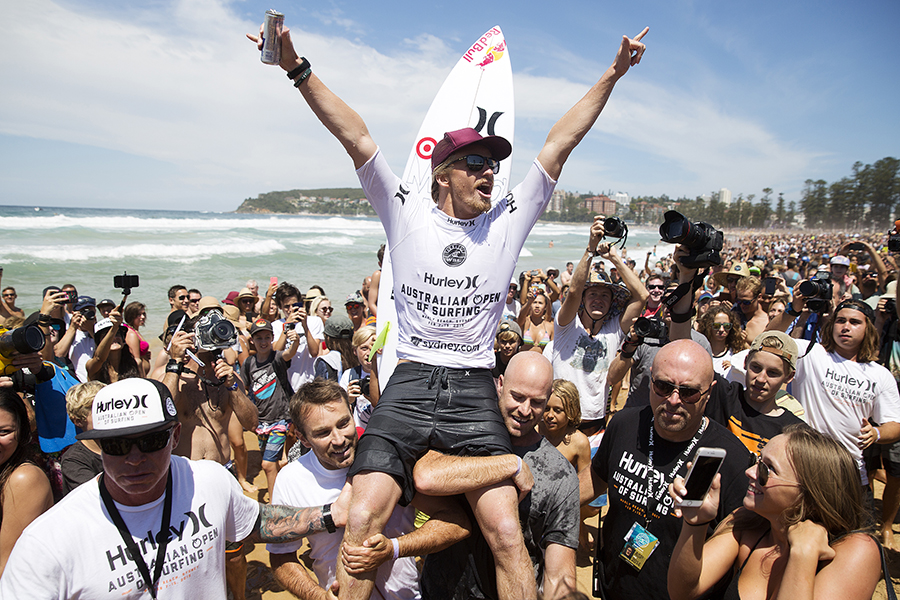 Kolohe Andino on top of the world down under at the Hurley Australian Open of Surfing. Credit: WSL/Matt Dunbar

Andino is the event’s NO. 2 seed and did’t disappoint all week, lighting up the lineup with inverted aerials and powerful wraps and snaps. Andino finished No. 11 in the world last year and is focused on breaking into the Top 10 this season and after he opened his account in the Final with a near-perfect 9.27 he’ll be one to watch this year.

“This has been a great event, but I’m not going to take my foot off the gas at all and I’m going to keep getting ready for Snapper,” Andino said. “I had a couple of heats where by back was up against the wall and I was able to fight through which is good mental prep for Snapper. I hadn’t really heard of Mateia (Hiquily) before, but I was super impressed by his surfing at this event, he was lighting these waves up — I told him to keep the momentum going and to go and get another result in Newcastle next week.” 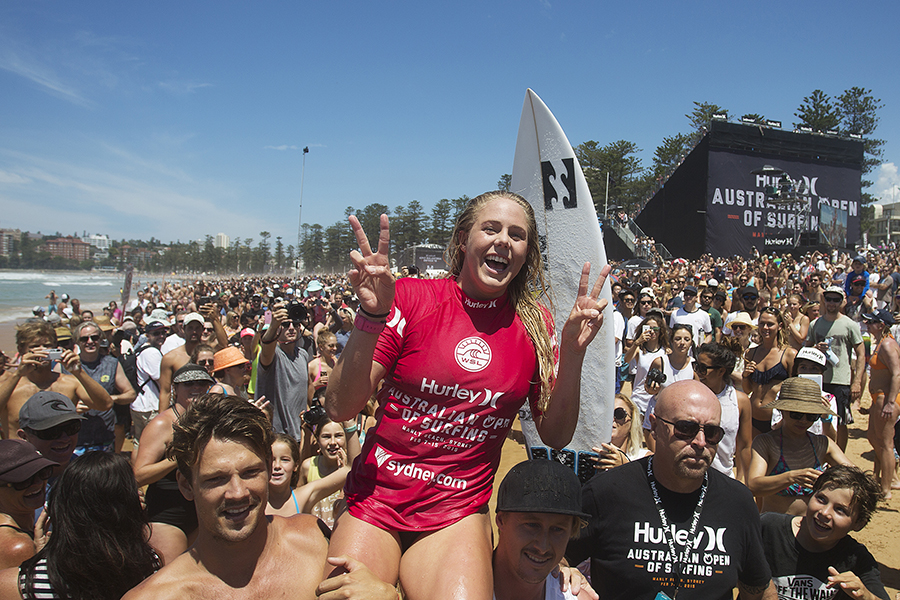 Enever has won her hometown event in spectacular fashion, besting reigning six-time World Champion Stephanie Gilmore yesterday and last year’s World No. 2 Tyler Wright (South Coast, NSW/AUS) in today’s Final to win her first professional event since 2010. Enever surfed fast and aggressive and amassed two scores in the 7-point-range to take the win leading into the start of the first Championship Tour event of the year on the Gold Coast at the end of the month.

“Just before this event I went over to P-pass to surf some perfect years and I’v been wanting to do that for the last five years,” Enever said. “Lately I’ve been grinding away in contests and to be able to get away and chase a swell made all the difference. It feels so good, it’s almost a relief to win something again and in front of the home crowd makes it even better.” 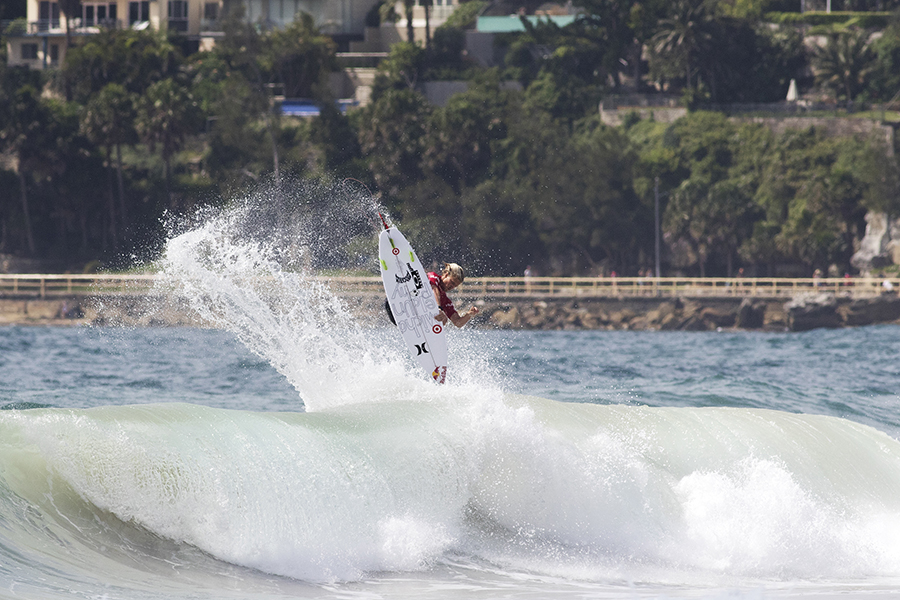 Mateia Hiquily (Tahiti) has been the Hurley Australian Open of Surfing surprise package, taking down big names the likes of Mick Fanning, Ryan Callinan, Billy Stairmand, and Joan Duru all the way to a runner-up finish. Hiquily surfed through a sever shoulder injury that almost saw him pull out of the event two weeks ago. Luckily for him and the surf fans on Manly beach he was able to pull on the contest jersey and still perform massive airs and explosive turns.

“I’m speechless right now, I’m so happy!” Hiquily said. “I trained really hard for this event, then two weeks ago hurt my shoulder so I’ve been taking it easy and it worked for me. I won a QS at home in Tahiti last year but it was a small one, so to now get a 2nd place at a QS6000 is huge for my confidence.”

Tyler Wright (Sth Coast, NSW/AUS) put up a great fight in the Final, but was unable to get past the in-form Enever. Wright and Enever both had a 7.77 in their scoreline, so it was a battle for the bigger back-up. In the last minute Wright was given her chance, but fell short by 0.83.

“This has been a great warm-up event for me and I feel ready now before heading to Snapper Rocks for the opening CT event of the year,” Wright said. “To surf the Final with another Australian and a big crowd on the beach was awesome. Big crowds are a lot of fun here at Manly and Laura (Enever) deserved the win – she was the standout all week!”

Tatiana Weston-Webb (Hawaii) finished equal 3rd place after being eliminated in the Semifinals by Enever. Weston-Webb has been one of the standout surfers of the event and even performed the ’turn of the event’ according to the WSL Judging panel.

“I’ve really enjoyed my week in Manly, it’s been a really fun event,” Weston-Webb said. “It’s always tough to lose, especially so close to the Final. I’m feeling a little let down because I really thought that I’d make the Final so it’s disappointing, but Semis is a great result.” 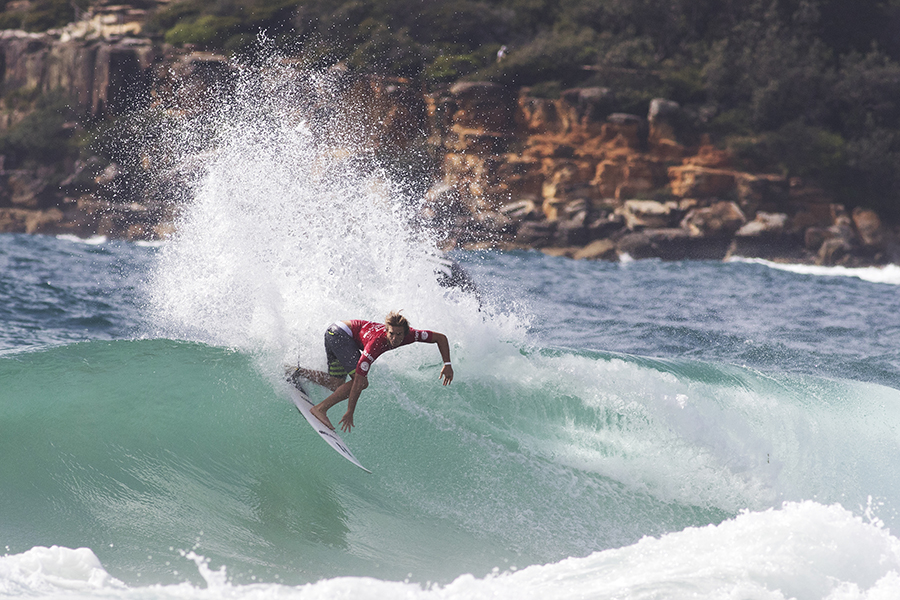 Ryan Callinan (Newcastle, NSW/AUS) is heading into his hometown event in Newcastle next week full of confidence after finishing 3rd at Manly. Callinan’s Semifinal was one of the best and most exciting heats of the whole event as he battled back and forth with the young Tahitian, both surfers netted excellent scores, but it was Hiquily who was given the nod by the judges.

“This event seems like everyone has stepped up their game, there was big scores in every heat,” Callinan said. “To have my first Semifinal in years and to lose with some solid scores means that Mateia (Hiquily) must have been going pretty good out there. The next event starts tomorrow in my hometown, I’ve never really done well there — the pressure gets to me. Hopefully the confidence I have after today will mean I’ll be able to go well at the next one too.”