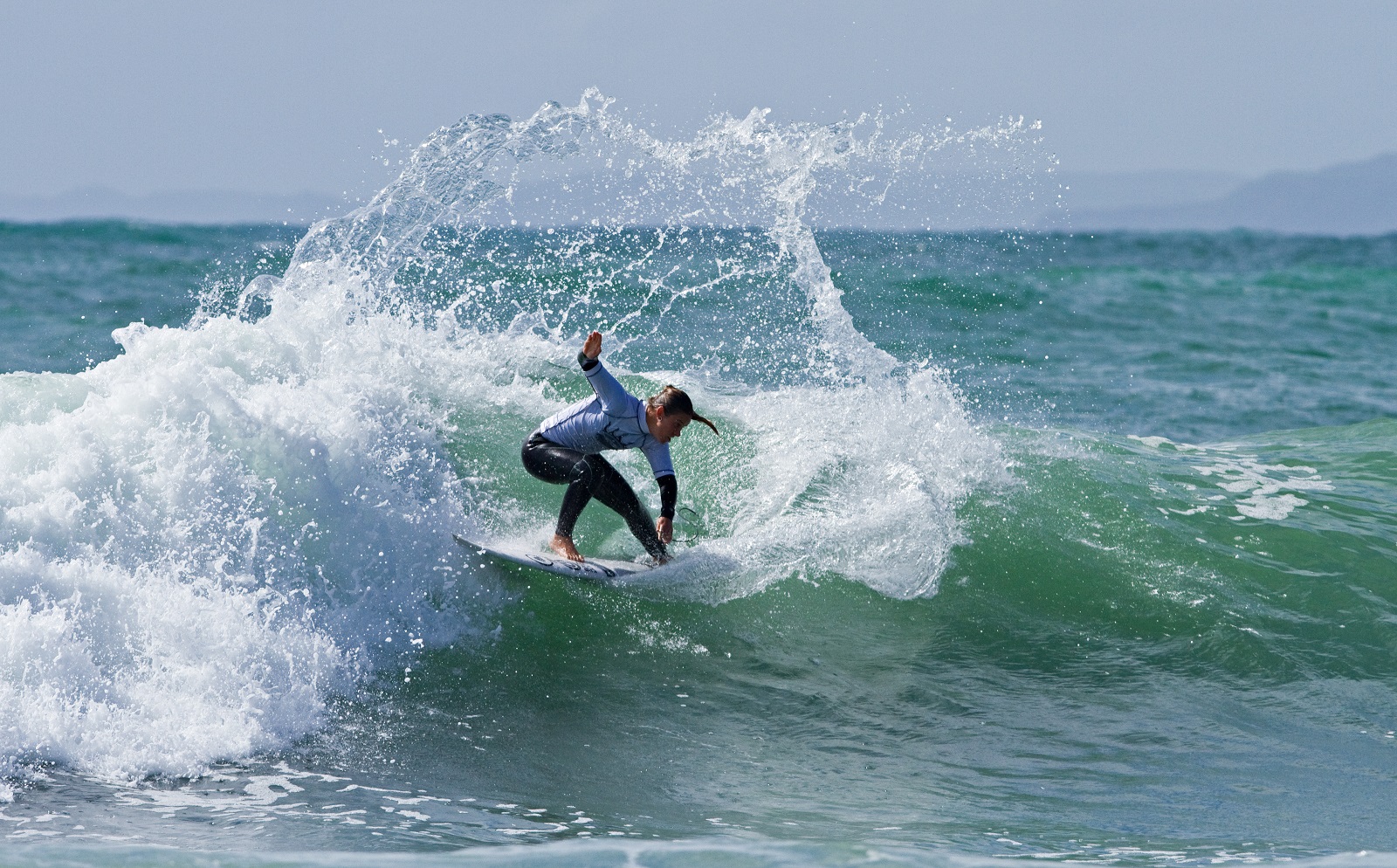 New Zealand’s most successful surfer – Taranaki’s Paige Hareb will contest the National Championships for the first time in 14 years next week as she looks to tick off another surfing accolade.

Hareb is one of several elite Kiwi surfers competing in amongst a field of over 300 entries at the 2021 National Surfing Championships presented by The Trusts Community Foundation.  The seven day event, being held at Auckland’s Piha Beach, runs from Sunday 10th – Saturday 16th January.

A restructured international calendar commences in mid-February.  That combined with over ten months at home in 2020 has allowed Hareb the opportunity to have another crack at the title, 14 years later.

“I have been stuck in New Zealand since March 2020, so I thought it was as good a time as any to compete at the event this year” said Hareb.

“I have always had in my head that I wanted to win a national title.  I want to tick it off and this year is the perfect opportunity” she added.

Hareb has enjoyed a good build up to the event suggesting she is the fittest she has ever been.

“I have been surfing heaps recently and getting into foiling too which is fun.  It has been a good build up for the event” she said.

Hareb will wait for as long as possible before booking to head over to Australia to commence competition on the Australasian World Qualifying Series as she evaluates the pandemic situation in New South Wales, the location of the first event of the year.

Hareb is joined in the Open Women’s Division by defending champion Ava Henderson (Chch) who is already posted up at Piha in preparation for the event.  Henderson burst onto the national stage at the 2020 Nationals held at Dunedin, winning as a young 14-year-old.  Since then, Henderson has gone on to match her older, more experienced opponents in the most recent domestic event, although Hareb came out the victor on that occasion.

The two surfers will be joined by two time National Champion Ella Williams (WGM), one of two provisionally qualified athletes for Tokyo 2020 as well as a number of talented young surfers.

Billy Stairmand is the second qualified athlete for Tokyo2020 and will front the line up in the Open Men’s Division.

Like Hareb, Stairmand won the most recent domestic event which was held in November at Raglan.  He is in excellent form and eyes an eighth national title next week, breaking his own record for the Open Men’s Division.

“The Nationals is one of my favourite events, I love to start the year competing at home, ease into things and feel comfortable with my surrounds” said Stairmand.

“I look forward to getting as many heats under my belt as possible next week and with the Olympic focus in the middle of the year, I am already well into my training programme” he added as he looks to put a crazy 2020 and serious leg injury behind him.

Stairmand won the event when it was last held at Piha and knows the break well.  “Piha is known for getting a lot of swell which is always good and we often surf lefthanders which is to my liking, I have the same house each time I compete here staying with friends and I look forward to the week with everyone and getting the season off to a good start” Stairmand said.

He will be joined by the top four surfers on the 2020 New Zealand Surf Series rankings in Taylor Hutchison (Rag), Daniel Farr (Tara) and Dune Kennings (Piha) who round out the top seeds at the event.

Defending champion Elliot Paerata – Reid will not be present to defend his title in home waters after crossing the ditch to Australia in October and not being able to secure a quarantine booking back in New Zealand in time to compete next week.

Dunedin’s South Coast Boardriders will defend the club title which will be hotly contested by several leading clubs from Raglan, Auckland, Mount Maunganui, Christchurch and Gisborne.  Also up for grabs at the Championships is the Peter Byers Overall Performance of the Event Award, the Byers family being an original Piha surfing family.

The longest running surfing event in New Zealand has a 57-year history and encompasses 29 divisions spread across all disciplines and age groups making for a largely inclusive event, filled with high level surfing as well as good times in and out of the water.

It is expected in excess of 300 entries will be received for the event.  Additional divisions comprise of age groups from Under 14 boys and girls through to Over 60s for males and females and Longboard, Stand Up Paddleboard, Bodyboard and Kneeboard disciplines.

Action will take place from approx. 8am – 4pm daily with the primary venue being at the southern end of Piha Beach.

All divisions have a staggered start to the event as per below:

*Finals for some divisions will be contested prior to Day 7.

Set out below are winners of the major divisions contested for the past five years.