TEAHUPO’O, Tahiti (Tuesday, August 23, 2016) – Kelly Slater (USA) has won the Billabong Pro Tahiti after defeating John John Florence (HAW) in the Final in eight-to-ten foot surf at Teahupo’o. The final day of competition at Stop No. 7 of 11 on the 2016 Samsung Galaxy World Surf League (WSL) Championship Tour (CT) has been treated to incredible performances by the world’s best surfers, culminating with Slater’s win. The Final day saw 35 barrels ridden between the two finalists.

11-time WSL Champion Slater claimed the 55th CT victory of his career to jump 11 places on the Jeep Leaderboard to 8th. The win today is Slater’s fifth in Tahiti, with previous event titles in 2000, 2003, 2005, 2011 and solidifies his position as the best surfer at Teahupo’o.

“When I look back that will for sure be one of the best wins I have ever had,” said Slater. “To have John John [Florence] in the Final is a dream for me. It is no secret that I am towards the tail-end of my career. John John and Gabriel [Medina] are on their way up and those guys are just monsters. John John is all of our favorite surfers, so I want to see how many heats I can get with him before I am done and to have him out here where he and Gabriel are the favorites. This is a really special time for me. I am stoked.”

Today’s win is Slater’s best result of the season and backs up a Semifinal berth in Fiji and a Quarterfinal finish in Jeffreys Bay. It also marks a return to form and his first CT event win since the Billabong Pipe Masters in 2013.

“It just came together for me,” continued Slater. “I was on the right waves, I was in sync and totally relaxed the whole time. To be in that Final with John John and lose would have been no problem for me. I was taking each heat as a bonus. I have had such a bad run for me historically over the last couple of years that anything was going to be good.”

The Final saw a stacked match-up between the two CT superstars. Florence was quick to get points on the board with an 8.00 on his opening ride, but Slater fired with a near-perfect 9.77. Slater landed a miraculous free-fall drop followed by escaping a deep barrel to garner a stunning 9.17. Florence, with a 15.23, was put in a combination situation and needed two new scores with ten minutes left on the clock. Slater continued to better his score with a phenomenal 9.90 for a near-perfect 19.67 combined total to claim his victory.

En route to the Final Slater posted a Perfect 20 heat total in his Round 5 match-up with Keanu Asing (HAW). This is only the ninth time a perfect heat has been achieved in 40 years of professional surfing and the third time Slater has accomplished this feat. Despite a strong opening from Asing, the Slater juggernaut picked up momentum throughout the back half of the heat, posting a Perfect 10, an excellent 8.10 and then another Perfect 10 to seal the win and etch another achievement in the history books.

“The first 10 of that heat was a more difficult ride definitely, but the second one was a bigger, more perfect, classic tube,” said Slater after winning Round 5. “I just thought that the first one was a lot more difficult, so I was not sure if they would throw a 10 on the second one. I have been feeling good all week. A perfect heat is not going to happen many times in your life so I am stoked.” 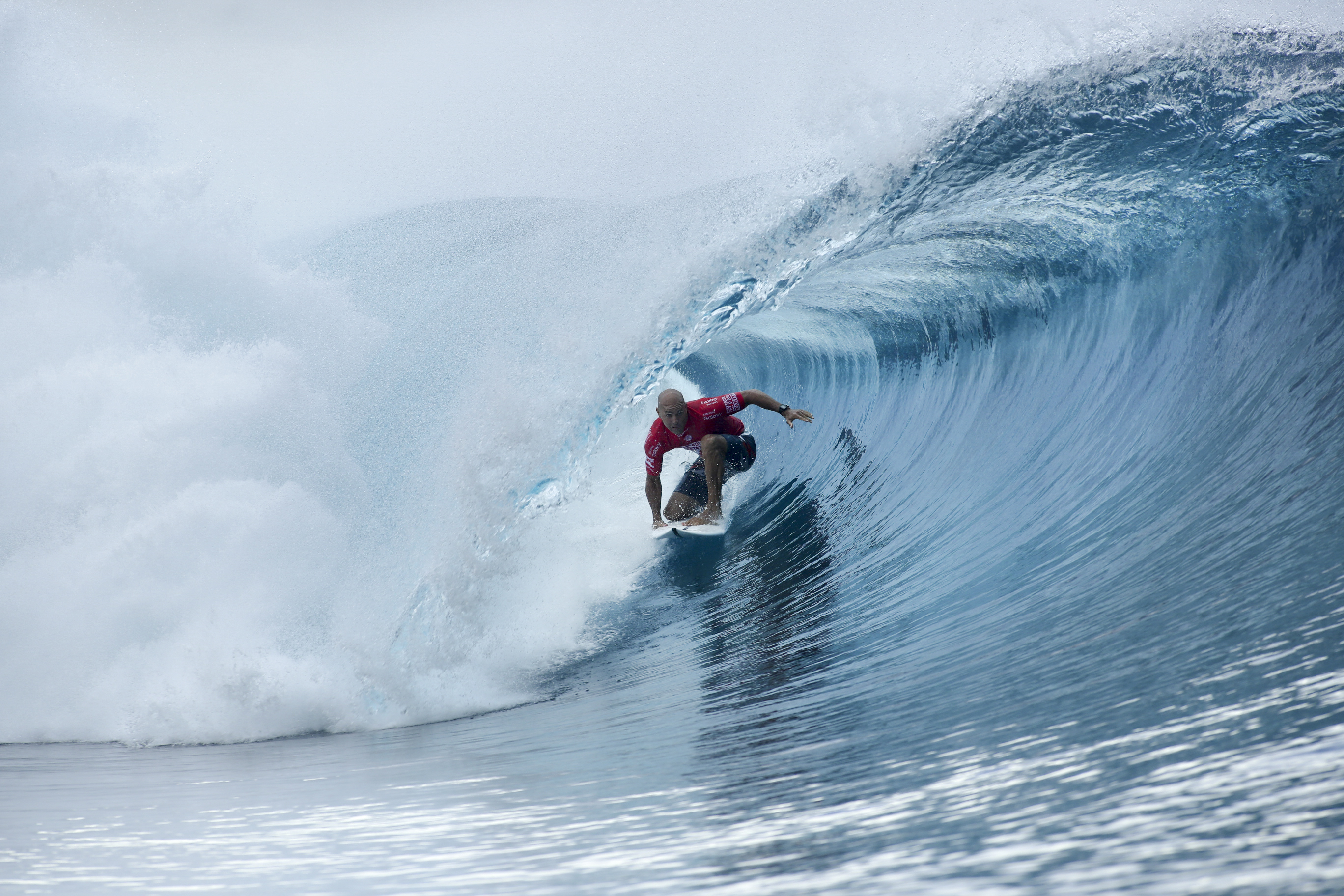 Slater previously dispatched event Wildcard Bruno Santos (BRA) in the Quarterfinals with another Perfect 10 and a commanding 9.27 back-up score to take the win.

Slater also received the Andy Irons Most Committed Performance Award, which is given out every year to the standout surfer of the Billabong Pro Tahiti. Previous winners include C.J. Hobgood (2015), Owen Wright (2014), John John Florence (2013), Ricardo dos Santos (2012) and Jeremy Flores (2011).

“I’m so stoked, I’ve worked for this thing for years,” said Slater. “Andy [Irons] would be equally mad and stoked that I won this. Last time I surfed against Andy, it was here at Teahupo’o and he won the event. It was his last win, and I lost to him in the Semifinals. It was a really special heat for me and this is a really special award. This is rad and I can’t wait to put the award in my house. I feel like I’ve won the contest already.”

The runner-up finish for Florence is his best ever result at Teahupo’o and sees the 23-year-old claim the Jeep Leader Jersey heading into the next event on the CT at Lower Trestles. Florence previously defeated Joel Parkinson (AUS) in Round 5, Julian Wilson (AUS) in the Quarterfinals and Gabriel Medina (BRA) in the Semifinals.

“I am super stoked to be the leader on the Jeep Rankings,” Florence said. “But at this point, it is only a yellow jersey and what counts is at the end of the year and there is still a lot to go this year. I am going to keep chipping away at it.” 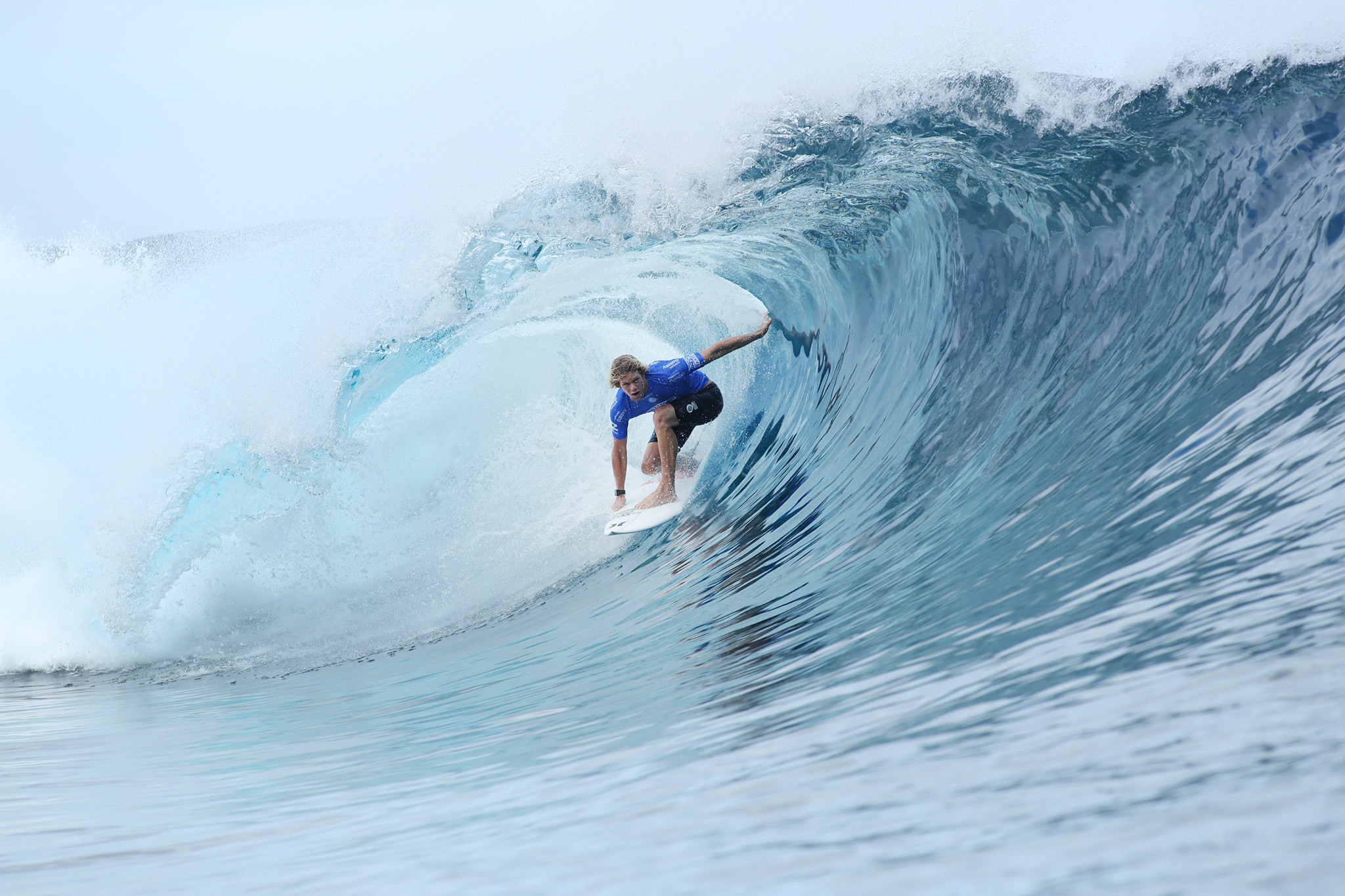 Gabriel Medina (BRA), 2014 event winner, takes home a third-place finish following an incredible match-up against Florence in the second Semifinal. The sensational superheat saw the pair battle for a place in the Final and the chance to claim the Jeep Leader Jersey. The surfers traded impressive scores throughout the heat, posting seven excellent barrels above 9.00 between them during the bout. The Hawaiian held a slight lead with a near-perfect 18.44 to Medina’s 17.46, but with ten minutes left on the clock, Medina challenged Florence by coming out of a monstrous barrel to earn a Perfect 10 (the fifth of the day) and gain control of the heat. Under pressure and with four minutes remaining, Florence needed a 9.31. In a dramatic exchange, Florence used his priority to land a critical 9.93 to regain the lead and followed it up with a 9.73 to seal the win.

“It was a really fun heat,” said Medina. “John [Florence] is always hard to beat anywhere. We both had really good waves. It was his day today. I look forward to Trestles.”

Medina previously dispatched Jadson Andre (BRA) in Round 5 and Josh Kerr (AUS) in the Quarterfinals before facing Florence. Following today’s result Medina will remain in third place on the Jeep Leaderboard heading into the next event on the CT at Lower Trestles. 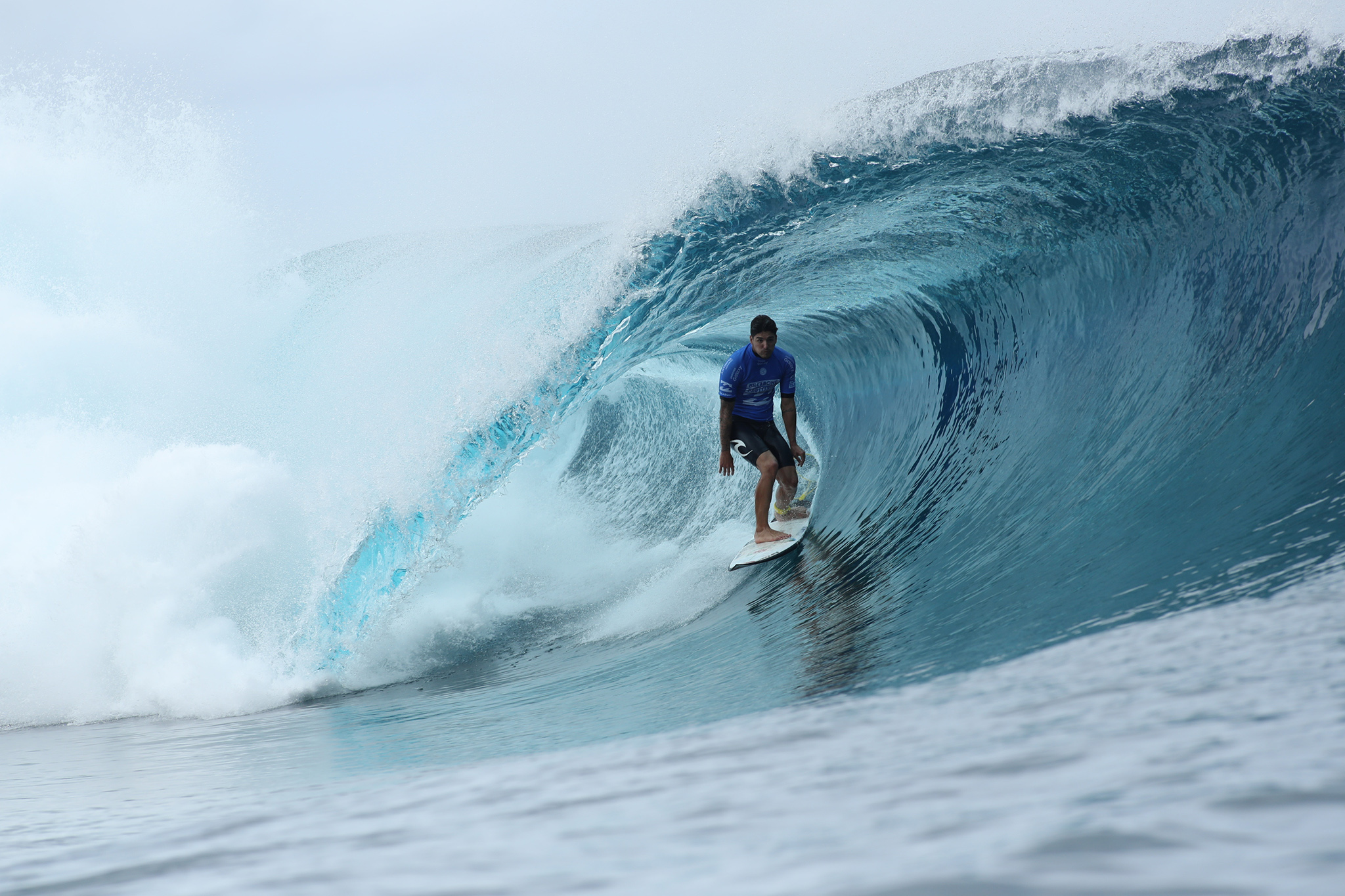 Adrian Buchan (AUS) finished the event in third place, matching his best result of the season, after being defeated by eventual winner Slater in the Semifinals. The bout was a rematch of the 2013 Final between the two former event winners, however this time it was the 11-time World Champion that took the win. Slater found a near-perfect 9.63 and a 6.67 to take the lead from Buchan on his opening exchange, while Buchan trailed close behind with an 8.17. Buchan, needing an 8.14, made numerous attempts to escape deep barrel rides, but was unsuccessful on his attempts. Slater increased his lead with an 8.77 to put Buchan in a combination in the last thirty seconds.

Today’s result sees Buchan move up from 11th to 4th place on the Jeep Leaderboard. Buchan previously dispatched Jordy Smith (ZAF) and Kolohe Andino (USA) from the event in Round 5 and the Quarterfinals, respectively.

Julian Wilson (AUS) was defeated by eventual runner-up Florence in Quarterfinal 4 by only 0.74 points in a close head-to-head battle. Florence fired early with excellent rides, but Wilson kept selective. A wipeout on the razor-sharp reef rattled the Australian, but he fired back by coming out of a deep tube to earn a Perfect 10. Despite Wilson’s strong score, Florence was quick to answer back with the dominant combined score for the win. Wilson moves up to 5th place on the Jeep Leaderboard.

“I had the two waves to win that heat for sure,” said Wilson. “The first one I waited for but I got caught out of position and got absolutely walloped and split my chin and took some skin off. It rattled me a bit and I had to reset and gave myself another chance. That 10 was super fun, I knew I had to make the most of that wave. I got the lead for a minute but John John got that wave right behind.”

The next stop on the 2016 Samsung Galaxy WSL Championship Tour will be the Hurley Pro and Swatch Women’s Pro at Trestles, which will see the battle for this season’s World Title heat up as with the world’s best surfers take on Lowers from September 7 -18, 2016.

Highlights from the Billabong Pro Tahiti will be webcast LIVE at WorldSurfLeague.com

For more information, check out WorldSurfLeague.com