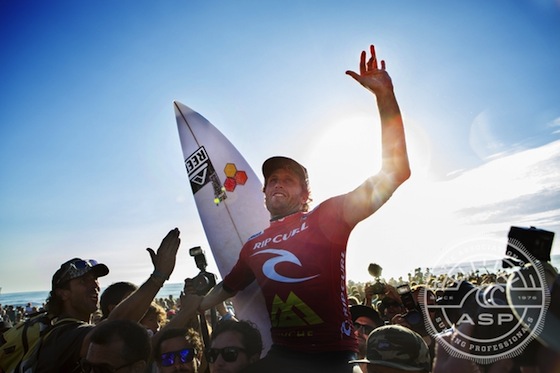 Otton’s victory would come at the hands of a wave-starved 30-minute final. The Australian would kick off the battle with the heat’s high score on his opening ride, building momentum in the tactical affair to eventually defeat Young in his first career ASP WCT event win.

“It’s the weirdest feeling ever, I just can’t comprehend it,” an ecstatic Otton said. “I really want to dedicate it to my Granddad, he passed away the year I qualified and never saw me on tour so this is for him. It seems like this event was a little bit of a grind, every heat the tide changed so dramatically you never really knew what was going to happen!”

Otton, who now sits at No. 7 on the ASP WCT Rankings following the victory, has been one of the most consistent surfers in 2013 and his road to victory in Portugal saw the Australian best a flock of the world’s best surfers. The goofy-footer was unstoppable on the final day of competition, defeating Hawaiian prodigy John John Florence (HAW), 20, two-time ASP World Champion and current rankings leader Mick Fanning (AUS), 32, and reigning ASP World Champion Joel Parkinson (AUS), 32, en route to the final.

“One of the things that has changed for me this year is my girlfriend being pregnant, I’m pretty excited about that,” Otton continued. “It’s unbelievable, it’s the next chapter I’m really looking forward to. It’s amazing to have all of the support, all my home town of Tathra, my Mom and Dad who supported me all of my career. To get here is kind of a pinnacle for me.”

Nat Young, who secured the ASP Rookie of the Year title on his way to the final, had a stellar run throughout the event, earning his second final berth of the 2013 season. The Californian would stay busy in his 35 minute clash, but was unable to maintain his rhythm to surpass Otton and would finish runner-up.

“The whole final was really frustrating, I couldn’t really get one good wave,” Young said. “I’ve been searching up-and-down the beach for waves and I was exhausted in the end. It’s been a good day for sure, after getting that close a second place is heart-breaking for sure but it’s still a great result, and Rookie of the Year is amazing too.”

Young’s road to the final was also impressive, with the rookie topping Australian fly-boy Josh Kerr (AUS), 29, in the Semifinals and Jordy Smith (ZAF), 25, in the Quarterfinals. The result propels Young into the Top 10 before the final event at Pipeline.

Josh Kerr was dominant on the final day of competition, posting two incredible rides while attaining the event’s high heat-total of 18.40 out of 20 in a Round 5 win over Taj Burrow (AUS), 35. Kerr managed to navigate through a tricky Quarterfinal heat, but would eventually fall to Young in the Semifinals.

“To look back on it, it’s a great result but a pretty frustrating kind of contest for me though,” Kerr stated. “I never really got a good rhythm going in any heat and kind of stumbled my way to the semis, it’s a little bit frustrating not being able to unleash out there and do what I wanted to do. Even in that one high-scoring heat, I got a 9 right at the start and it took me til the end to get my next good score.”

Joel Parkinson, reigning ASP World Champion, put in some solid heats to make his way to the Semifinals, defeating form surfers Julian Wilson (AUS), 24, and Matt Wilkinson (AUS), 25. Parkinson however was unable to put a stop to Otton’s efforts, and with an equal third place in Portugal, is officially out of the 2013 ASP World Title Race.

Mick Fanning (AUS), 32, further solidified his lead on the World Title Race, collecting a 5th place at the Rip Curl Pro Portugal pres. by Moche. Fanning looked poised to secure a third crown at Supertubos, but was unable to clinch an early third ASP World Title when he was defeated by Kai Otton in the Quarterfinals.

“It’s a bit frustrating, obviously I just wanted to surf and unfortunately it didn’t really happen,” Fanning said. “I’m stoked that I made some points here, it puts me in a better position going into Pipe and I’m excited to go to Hawaii. I’ll do the whole triple crown so this could be fun! I’ve had a lot of slow heats this year, snuck through a few, but you know every now and then one’s going to go your way. It probably made it a little bit more significant with what was on the line at that time.”

Entering the final stop on the 2013 ASP World Championship Tour, Mick Fanning and Kelly Slater (USA), 41, remain in contention for the ASP World Title. Following Fanning’s fifth place at the Rip Curl Pro Portugal, Slater must win the Pipe Masters to surpass Fanning for the ASP World Title. If Slater is to win the event, Fanning must place 3rd or better to claim the title for himself.

All results, photos, videos and heats on-demand available via www.live.ripcurl.com