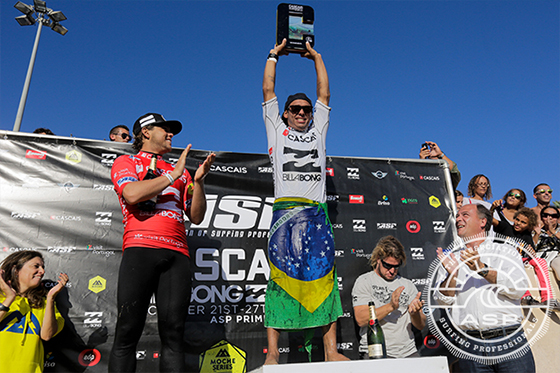 Pictured: The podium of the inaugural Cascais Billabong Pro

Last event of the Moche Series, this event also crowned Adam Melling (AUS) 28, as the Cascais Trophy winner and rewarded him an extra US$50,000 prizemoney. And finally on the very last day of the European leg of events, it was Jeremy Flores (FRA) 25 that was crowned the 2013 ASP European Champion.

Jadson Andre (BRA) 23, came exploding right out of the gates in the final, building on all his scores ultimately belting a perfect 10 point ride, the second of the event, for an incredibly long barrel on his frontside to seal the deal.

“This is amazing, Portugal is a very special place for me,” Andre stated. “I was ISA world champion here, when I qualified in 2009 I was 100% sure after the Azores and right now I was needing a big result and a win over here is going to be really important again. I’ve been training a lot, working out and trying a lot of boards, so to win that contest is a special moment.”

A former WCT surfer for three seasons, Andre with this result builds a strong season tally towards requalification for next year’s elite Top32. The talented Brazilian will need to finish strong in the Hawaiian leg to guarantee a coveted ticket for 2014.

“I feel relieved way more that I can explain,” Andre continued. “There’s still two events left in Hawaii, I know I’m really close but I don’t want to speak too fast. I want to go to Hawaii and try to surf my best. I made my goal for the year, that was to go there without needing too big a result.”

Conner Coffin (USA) 20, had an almost perfect run into the Cascais Billabong Pro, fighting his way to the final and eliminating many top level athletes along the way. Coffin has displayed his progressive surfing repertoire and barrel technique all-week, netting some impressive heat totals.

“It feels insane, once I got to the quarter-finals I was so stoked,” Coffin said. “When I got that score in the semi and made the final I was tripping, it felt like I won the contest ! I’m stoked for Jadson, I really wanted to win but I kind of had a shocker in the final. It’s still a huge confidence booster for me, biggest result of my career I’m stoked.”

One of the top juniors on the ASP International scene, Coffin fell short of finding the necessary opportunities in his first ever final of a major ASP event and finished runner-up. With this result under the belt, Coffin catapults to the 36th position on the World Rankings before the final two Prime events of the season.

“Honestly I have so over-achieved my goals this year, I don’t give too much importance to the world rankings,” Coffin continued. “But obviously I’m going to keep going in each heat and try to do my best, and improve my surfing. If I can get another big result and make the WCT that’d just be insane.”

Carlos Munoz (CRI) 20, was in a devastating form throughout the whole event, consistently posting some of the highest scores for some incredible aerial manoevers. Munoz eliminated Mitch Crews (AUS) 23, on his way to the semi-finals with a near-perfect kerrupt flip rewarded by a 9.57 out of 10.

“I saw the wind switch and I’ve been training a lot doing big airs,” Munoz explained. “The only way to beat those guys is giving your best, I just don’t want to go home feeling I haven’t tried everything. I’m just super happy I landed my airs, I can’t believe it !”

The talented Costa-Rican couldn’t unfortunately counter a last-minute attack by Coffin in the semis and placed equal third at the ASP Prime Cascais Billabong Pro, scalping his career-best result to date, and climbing up to the 45th spot on the World Rankings.

“It hurts to lose when you’re that close, but it’s all good !” Munoz continued. “I love surfing and I have fun competing, that’s the most important thing ! I’m super stoked, this is my best result ever. I’ve compared my surfing with all the best surfers, and I’m there it’s great. There’s plenty of surfers in Costa-Rica, watching the webcast and waking up early to support me so I’m stoked. I love to be able to speak about them and hopefully open the gate for more surfers from home.”

Jeremy Flores (FRA) 25, current World No.18, built momentum heat after heat today culminating when he found a long and clean barrel to score a 9.10 and eliminate other form-surfer of the event Adam Melling (AUS) 28.

“I felt lucky cause I got the best waves,” Flores stated. “That fun left came to me and I just did my turns, and tried to push as hard as I could. Adam for me was the strongest surfer in this event so I knew I had to stay close cause he could get an 8 or a 9 easy. “

Flores, however was unable to find enough scoring opportunities in his semi-final encounter against Andre. Flores placed equal third and in the process clinched the 2013 ASP European Title when his closest competition Jonathan Gonzalez (CNY) ended his run in the quarters.

“I didn’t come here expecting to fight for that title, all the European surfers have been surfing amazing all year,” Flores continued. “I think there should be more on tour, they’ve been surfing next level ! I want to dedicate this trophy to my grandfather who passed away just recently.”

Adam Melling (AUS) 28, former runner-up at the ASP Prime event in Azores earlier this summer, claimed the overall Moche Series, a local triple-crown like leg of events, to net a bonus prizemoney of US$50,000 and the prestige of being the most successful surfer of the Portuguese leg.

“I’m feeling amazing, I’ve got a wedding next year and my girlfriend will be pretty happy with that !” Melling said. “Over in Portugal I’ve done pretty good in the past and it’s good to get a couple of finals in the bag and win the trophy for sure ! The waves have been fun and we’ve always had some pretty powerful surf.”

Melling even got a taste of Portuguese perfection in his first heat today, starting on a fast and hollow righthander to net the first perfect 10 point ride of the event.

“I was a little bit anxious this morning and I was really keen to get out there,” Melling said. “That thing came to me I knew it was a bomb as soon as I looked at it, you could see it was going to tube pretty good, I was happy to get that 10 straight up !”

The ASP Prime Cascais Billabong Pro is scheduled from October 21-27, 2013 in Cascais, Portugal. For all results, photos, video highlights, press releases and LIVE webcast, log on to aspeurope.com/cascais.

CASCAIS BILLABONG PRO ROUND OF 16 RESULTS: