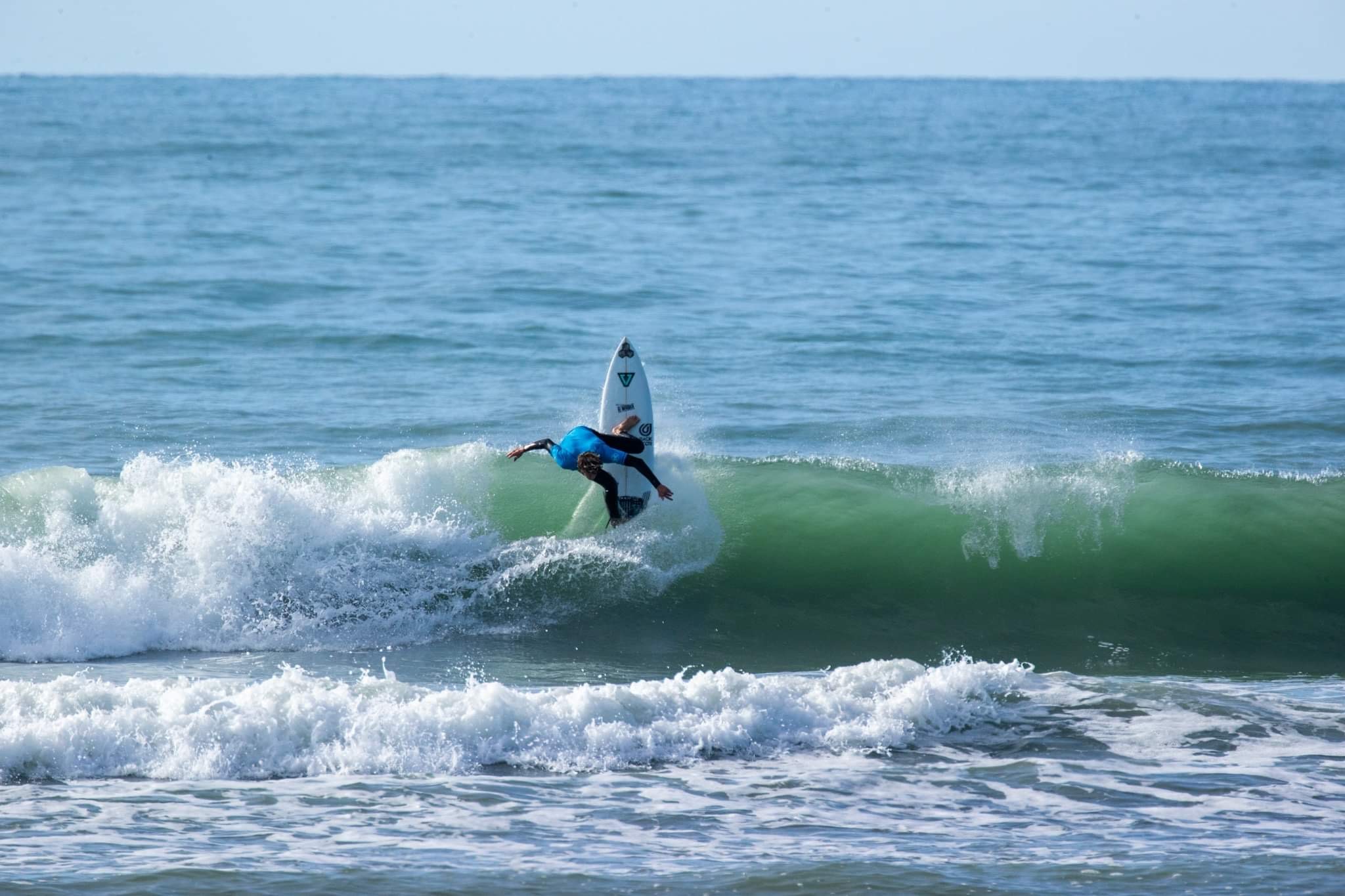 Taylor Hutchison has claimed back-to-back NZ Surf Series wins over the weekend winning the Exit Surf Men’s Canterbury Championships held at North New Brighton.  Hutchison will carry his number one ranking into the final two events of the year in a bid to win the overall series.

The event was completed on Sunday with the swell still hitting the 1.0m mark with light onshore winds before the tide came in late afternoon.

Hutchison won out in a tight final against cousin Caleb Cutmore with a 12.13 point heat total over Cutmore’s 12.10.  A flurry of waves at the start of the final got the surfers off to a quick start before a big lull dominated the remainder of the final.

“Pretty stoked to get two in a row” exclaimed Hutchison post final.  “I have been working a lot on my surfing in bad waves now that I have moved to the Mount and it is good to see it pay off.  I lived in Raglan all my life so I have always been in tune with those waves but to get a win in the small beach break stuff is good” he added.

It is Hutchison’s first win in the South Island which he puts down to several factors, but most of all – enjoying competing.  “It is a combination of things, I got glandular fever a couple of years ago and it took ages to come back completely but now I am happy with my surfing.  This year I have been enjoying competing which is probably the main factor.”

Hutchison has a chance to make it a hattrick next weekend at Taranaki, something that he hasn’t thought about too much yet but he is looking forward to another event given his current form.

Cutmore fell just short of the win but for him, it was a return to form, he himself noting that he had advanced out of only the one heat all summer prior to this event.

“Stoked to get on a roll, I felt I was surfing well, stoked to get some momentum heading into Taranaki this weekend” said Cutmore.

“We both got couple waves at the start of the final with similar scores, but the tide filled in and it slowed down, I don’t even think there was a counting score in the second half of the final, I just couldn’t find anything, it was tricky despite the light winds and swell that was on offer.

Northland surfer Paul Moretti finished the final in third place after a good run all event.  Moretti has only been able to participate in select events this season but made his presence felt at the Exit Surf Men’s Canterbury Championships.

Oakley was part of the Exit Surf Under 18 Boys Division that was won by Myka Black (Chch) after an intense head-to-head tussle with Raglan’s Jayden Willoughby.  Black got the edge 13.8 v 13.2 captialising on some critical sections on the inside shore break with Kalani Louis (Tara) in third and Oakley in fourth.

Zen Wallis (Piha) clinched the Make Longboard Division Final after snagging a big set wave in the opening minute and surfing it to a 7.5 point score.  His three opponents were on the backfoot from the outset and Wallis could sit patiently waiting for a second scoring ride.  With his win came the overall NZ Longboard Series title for 2021 after winning three of the five events this season.  Hugh Ritchie (Chch) finished in second place ahead of Sam Johnson (Gis) in third and Mark Robberds (Chch) in fourth.

Tao Mouldey (Mnt) added a further two wins to the season in the Under 16 and Under 14 Boys Divisions bringing his tally to twelve.

Mount Maunganui claimed another title in the Over 30 Men’s Division with Reuben Woods clinching the victory with precision wave selection over Jarred Hancox (Tara) while local surfer and farther of double finalist Jai, Mike Oakley, won the Over 45 Men’s Division.

The Exit Surf Men’s Canterbury Championships is the fourth of six events on the 2021 New Zealand Surf Series offering up $6,500 in prize money across all divisions.  See below for remaining events: