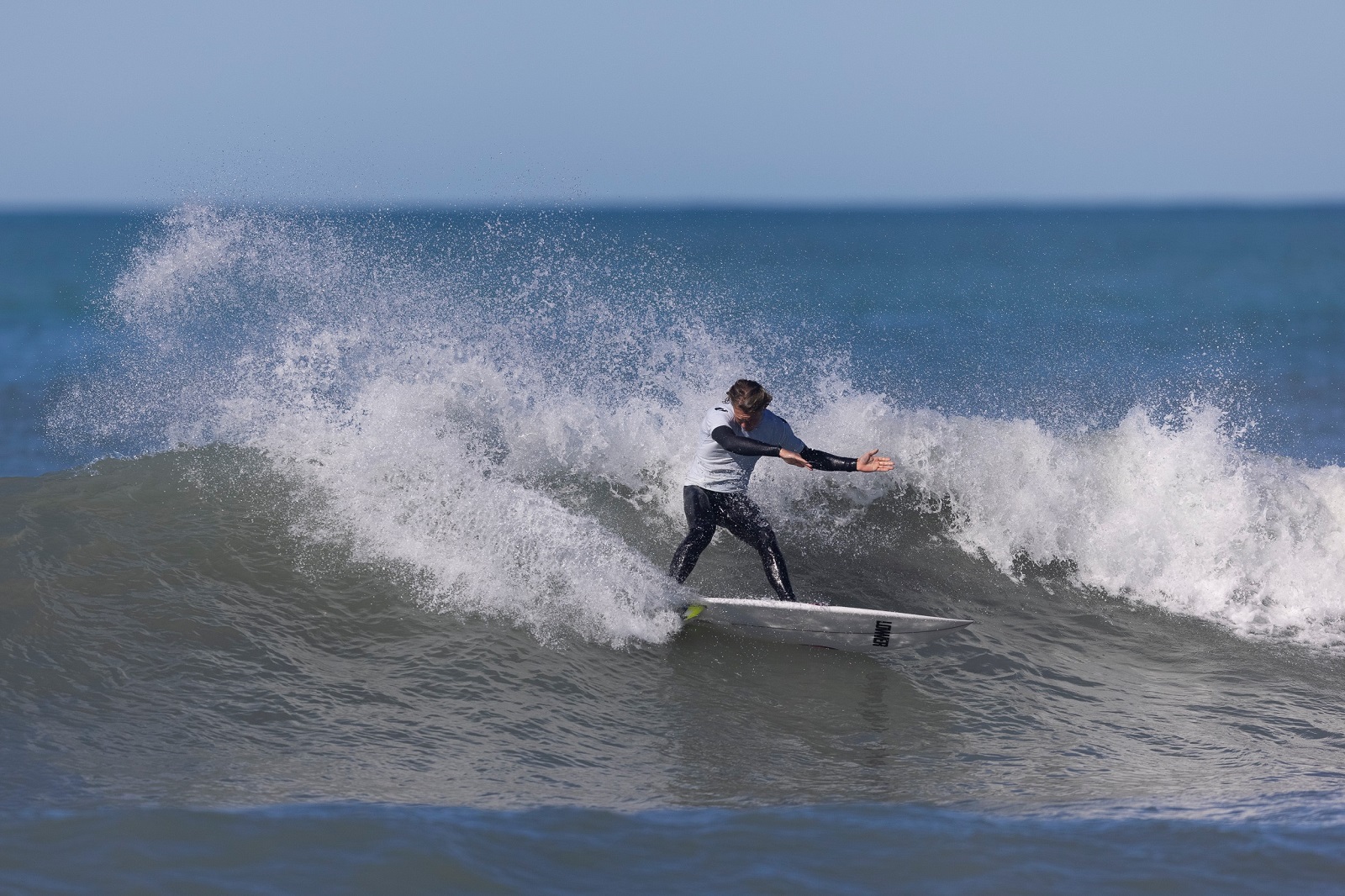 Jack Hinton (Mnt) and Ava Henderson have clinched back to back wins on the New Zealand Grom Series this weekend after winning the Kaikoura Grom Comp completed at Meatworks today (Sunday 18th April).

Hinton won his first ever national event last weekend and backed it up this weekend in the South Island with a last-minute victory in the Under 18 Boys Division.

Henderson surfed to an impressive 15.4 point heat total in her Under 18 Girls Final to lock down her eighth win of the season.

The Kaikoura Grom Comp marks the final event of the South Grom Series and one of the last remaining opportunities for junior surfers around the country to gain points toward qualification for the final at Piha in one months time.

The final day of the event started out with clean glassy conditions and 1.0m peaks rolling through the line up.  The north east wind strengthened in the afternoon making the latter finals challenging.

Today, Hinton finished with a 12.8 point heat total in the Under 18 Boys Division to outpoint Christchurch surfer Rakiatia Tau who finished runner up on 10.2 points.

“To win my first event last weekend and then win one again here, I am so stoked” commented Hinton.  “It is cool to finish the season surfing well and the wins are a bonus, I am looking forward to finishing at Piha in a month’s time” he added.

Double finalist Kalani Louis finished in third place ahead of local and form surfer for much of the event, Tyler Perry.

In the Under 18 Girls Division, Henderson opened with a great first ride and built on a near unassailable position from there on in.

“Yeah it is another win for the season which is pretty cool” said Henderson.  “It was tricky out there with that cross-shore wind that came up around lunch-time so it was good to get a couple of decent waves early to put the pressure on the others” added Henderson.

Henderson is spending her first year at the Raglan Surf Academy but enjoys coming home for all the South Island events and catching up with family and friends.  She will now look toward the Backdoor Pro pres by Billabong which is being held in Taranaki in two week’s time.

Pia Rogers (WGM) secured her best result of the year with a runner up finish thanks to a nice opening ride on her backhand.  Anna Brock (Mnt) finished in third ahead of Leah Wilson (Chch) in fourth.

The Under 16 Boys and Girls Divisions were dominated by surfers competing up a division with dual event champion Tao Mouldey (Mnt) claiming his second win of the day while Chloe Groube (Pau) claimed victory in the girls division, the tightest final of the day.

Auckland’s Leia Millar had to wait until the final 30 seconds of her final in the Under 14 Girls Division to edge past Pauanui’s Chloe Groube who, despite incurring an interference in the opening minute, held the lead throughout.

Imagery
High resolution action images of the surfing will be available to media free of charge.

Partners
The 2021 edition of the Kaikoura Grom Comp would not be possible without the support of the South Island Surfing Association and Kaikoura Boardriders.