TEAHUPO’O, Tahiti (Monday, August 17, 2015) – A day of high drama and upsets played out at the Billabong Pro Tahiti, stop No. 7 on the 2015 Samsung Galaxy World Surf League (WSL) Championship Tour (CT). Competition ran through the opening 8 Heats of Round 3 in fun three-to-five foot surf at Teahupo’o before being called off as conditions became inconsistent with the hide tide.

A stacked match-up between reigning WSL Champion and defending event winner Gabriel Medina (BRA) and Hawaiian phenom John John Florence (HAW) unfolded in Round 3 Heat 5. With four previous man-on-man heats and two wins apiece the pair looked evenly matched. Medina took an early advantage and looked comfortable and in control in the barreling surf, earning a 9.07 on his fourth ride. Florence looked out of rhythm until he found a clean barrel and finished with a snap for a 9.57 and the lead. He found another deep barrel shortly after for back-to-back nine-point rides. Medina answered with two more tube rides of his own, needing a 9.58, and earning a 9.27 and a heat-high 9.73 for the lead. The Hawaiian was left searching for a 9.44 and is eliminated from the competition in 13th place.

“I was really excited before the heat and kind of scared too,” Medina said. “John John (Florence) is one of the best out here and he’s my favorite surfer. That was a good battle and we both got a few nines. I’m stoked to get barreled, the waves were amazing and it’s great to make one more heat. I knew it would be a tough heat though and my dad told me not to worry about high scores, just to focus and keep doing what you’re doing. It’s good to be making heats again after a lot of loss at the beginning of the year. I love this wave and I’m looking for a good result here.”

“It was a really fun heat and a back-to-back battle,” said Florence. “I keep getting these heats where I’m getting the highest scores but then don’t get it at the end, especially in Tahiti. I’m still feeling confident because I did everything I could. I’m sure it will go my way soon and I’m excited for when that happens.”

Adriano de Souza (BRA) faced wildcard and 2008 event winner Bruno Santos (BRA) in an exciting all-Brazilian match-up. De Souza was looking for a strong result in Tahiti to solidify his position as Jeep rankings leader but couldn’t find the back-up score he needed to overcome Santos’ 16.20 heat total and is eliminated in 13th place. De Souza’s upset defeat and early exit leaves the door open for the next four surfers on the rankings to claim the top spot.

“I was really excited and that heat was amazing,” said Santos. “I’m very happy now but sad at the same time because Adriano (de Souza) is a good friend of mine and I really want to see him with the title at the end of the year. I want to do well here as well and advance through some more heats so it’s good to be in Round 4 because I have the chance to advance straight to the Quarterfinals. I look forward to trying my best against the best in the best conditions.”

Replacement surfer and former CT competitor Aritz Aranburu (ESP) took down three-time WSL Champion Mick Fanning (AUS) in wave-starved Round 3 Heat 7. The wildcard got to work early and posted a two-wave total of 15.17 while Fanning had only 6.67 as the clock wound down. A strong result for Fanning in Tahiti would have given him the opportunity to steal the Jeep leader jersey from De Souza, but defeat at the hands of the Aranburu sees him eliminated in equal 13th place.

“I was lucky enough that I got that good one at the beginning,” said Aranburu. “Everything went my way because I got those two waves and there wasn’t much other scoring potential. Having Mick (Fanning) in my heat I knew that any mistake would cost me so I was just trying to play smart and it went well so I’m happy. This contest is a blessing and I’m just trying to make heats and enjoy it as much as I can.” 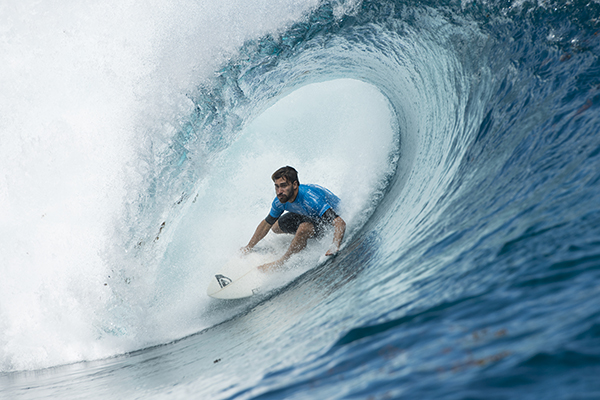 After three attempts and three falls Brazilian Filipe Toledo (BRA) seemed to find his feet in the opening heat of Round 3. Current No. 4 on the Jeep Leaderboard went on to find three barrels with a clean exit to build a 16.97 heat total and take the win over Brett Simpson (USA). Simpson, who is currently at 36th place on the rankings and in need of a series of strong results to re-qualify for 2016, is eliminated in equal 13th place while Toledo heads to Round 4.

“In my last heat I don’t think I was in the right place,” Toledo. “This heat I tried to get deeper but I fell on the first few waves so I tried to slow down. Finally I feel like I’m in Tahiti – the sun has come out and I got some barrels. I’m just trying to enjoy things, have fun and not think about the world title to much.”

Two nine-point rides from Owen Wright (AUS) gave him a decisive win over Dusty Payne (HAW) in Round 3 Heat 3. The Australian, who is currently in fifth place on the Jeep Leaderboard, looked in sync with the ocean, finding the best waves and dominating the lineup. Payne meanwhile, at 35th on the rankings, goes home with a disappointing place 13th despite a great performance and a strong heat total of his own.

“The heats I’ve had against Dusty (Payne) have all been tough,” said Wright. “I feel for him but I’m stoked to get through the early Rounds. Last year in that size I was probably a bit manic and I noticed that Kelly (Slater) and John John (Florence) were picking the eyes out of it, which I think comes with experience so I wanted to spend more time here. I’ve definitely learnt a lot. I’ve put one competition together this year and I’d love to do that again. I’m working on my consistency and hopefully that takes me where I want to go, to the top.”

Kai Otton (AUS) along with Brazilian rookies Italo Ferreira (BRA) and Wiggolly Dantas (BRA) also won through their Round 3 heats to advance to Round 4.

When competition resumes, up first will be Josh Kerr (AUS) and Adrian Buchan (AUS) in Heat 9 of Round 3.

Event organizers will reconvene tomorrow at 7 a.m. to assess conditions and make a call for competition.

The Billabong Pro Tahiti runs from Friday, August 14 to Tuesday, August 25, 2015 and is webcast LIVE at WorldSurfLeauge.com and via the WSL mobile app.

The world’s best surfing is also broadcast LIVE on Fox Sports in Australia, MCS Extreme in France, EDGE Sports in China, South Korea, Malaysia and other territories and on Globo TV in Brazil.