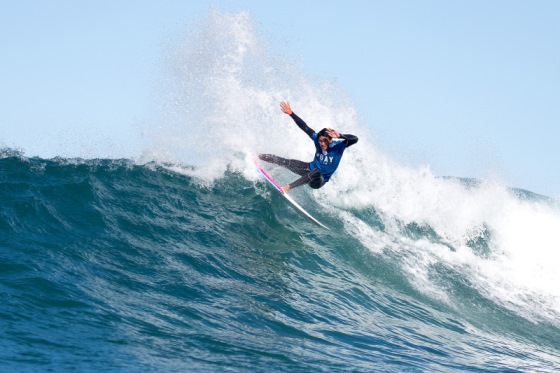 Caption: French surfer Jeremy Flores has been suspended from ASP competition until the completion of the Billabong Pro Tahiti.
Photo: ASP/CESTARI

The incident involved the athlete confronting ASP officials and event staff in an unsportsmanlike manner and resulted in the Rules and Disciplinary Committee, after completing its investigation, fining the surfer US$6,000 and suspending him from ASP competitions until August 27, 2014.  As a result, Flores is ineligible to compete in both the Vans US Open of Surfing in Huntington Beach (an ASP Prime QS event) and the Billabong Pro Tahiti (an ASP WCT event).

Flores has apologized, both in writing and in-person, to the ASP officials involved and will be eligible to return to competition at the completion of his suspension and in time for the Hurley Pro at Trestles from September 9 – 20, 2014.  Flores has told ASP officials that he accepts full responsibility for his actions and that he will not be contesting the suspension or fine.

The J-Bay Open, Stop No. 6 of 11 on the 2014 Samsung Galaxy ASP World Championship Tour, is down to its final 12 competitors and a projected swell in the coming days could see the event recommence as early as tomorrow.

The event will be webcast live via www.aspworldtour.com