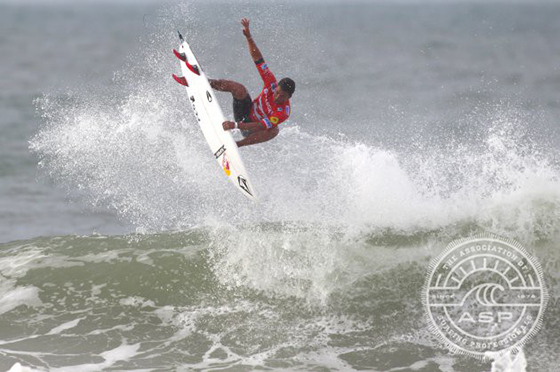 Pictured: Carlos Munoz (CRI) has been lighting up the peaks at Praia de Carcavelos.

Event No. 6 of 8 on the 2013 ASP Prime Series, the Cascais Billabong Pro will crown the European Champion, decide the winner of the Portuguese Waves Series and play a vital role in the qualification campaigns towards the 2014 ASP World Championship Tour.

Jadson Andre (BRA) 23, lit up the afternoon finding two incredible barrels to net the highest single wave score of the event so far, a near-perfect 9.93 out of 10. After spending two seasons amongst the best surfers in the world on the WCT, Andre is back on the qualificating tour and looks like a solid contender to re-join the Top32 next year.

“I saw a really nice double-up come and I paddled as fast as I could, when I stood up I saw a really nice, long and deep barrel and I thought I really needed to make it I knew it was going to be a big score,” Andre said. “That was a really important heat for me right now, I’m on the bubble at the moment, I’m trying hard not to think about it but it’s hard.”

Andre’s 2013 season is an example of consistency, with already three 9th place finishes in Margaret River, Ballito and Huntington Prime events and a 5th place at home in Brazil. Currently sitting in 26th position on the World Rankings, Andre will be looking to net another major result in Cascais to further solidify his chances.

“Last year was a really tough year for me, I had three injuries I broke my knee, I had a groin injury and an ankle injury,” Andre continued. “I wasn’t able to surf my best and missed a few events. At the end of the year I tried to focus on the positive and this year I identified what went wrong and tried to improve. It looks like I’m doing good, I know it’s a long way to go but I can feel I’m close.”

Gabriel Medina (BRA) 19, easily advanced into the Round of 16, dominating his no-loser Round of 24 with two solid scores. Currently ranked 16th on the ASP World Championship Tour, Medina surfed a pressure-less heat and showcased the full array of his surfing repertoire mixing airs, carving turns and floaters.

“I feel good, that was a fun heat !” Medina said. “I just tried to catch a lot of waves, it’s not easy not get the good ones. I kept building my scoreboard and ended up with two sevens. Here’s pretty much like Brazil, we speak Portuguese, eat the same food we have at home, I’ve been here three weeks and it’s good fun !”

C.J Hobgood (USA) 34, put on another great performance to win his no-loser Round of 24 match-up and relegate up-and-coming Californian phenom Conner Coffin (USA) 20, and perrenial threat Jay Thompson (AUS) into the round of 24. Hobgood selected carefully opting to only surf five waves, and managed to stave off an inspired last-minute recovery from Coffin.

“We’ve had every kind of wind, every kind of wave but I just feel like there’s light at the end of the tunnel, one of these days we’re going to get sunshine and everything !” Hobgood said. “I’m stoked to make another heat it was pretty fun out there, everyone had waves, I feel maybe I got a little tighter on my backhand against two regular-footers.”

Coffin would come back in the following round to eliminate Damien Hobgood (USA) 34, with a lethal backhand attack at the then cleaned up Carcavelos walls. The young surfer from Santa Barbara will have a second opportunity to surf against former World Champion C.J Hobgood in their upcoming round of 16 match-up.

“It’s a pretty tough lineup to navigate, there’s some serious rips coming through so you got to manage to find a clear spot,” Coffin explained. “I’m super stoked, coming into the Azores I hadn’t made a heat in a Prime yet, so I was stoked to make my first heat there and got on a little roll.. It’s been a tricky transition coming in from the juniors, surfing against all the WCT guys it’s just gnarly but you got to do it and I’m stoked I’ve finally found my feet.”

Granger Larsen (HAW) 23, current World No.40 sitting right outside the qualification bubble, powered his way into the fifth round of competition and will be looking to finish strong tomorrow to ameliorate his position on the World Rankings.

“I was kind of having a hard time out there,” Larsen admitted. “Finally I got an alright score and was only needing like a 5, and I got that little right and got the score. Going against two WCT guys is kind of nerve-wracking, but you want to beat those guys to make it on tour, I’m stoked to win that heat and skip a round, and get a good result before Hawaii and the Triple Crown.”

Things also heated up in the ASP European Title race with Jonathan Gonzalez (CNY) 33 and Maxime Huscenot (FRA) 21, both making their way into the Round of 16. Their upcoming match-up could potentially decide the European title with the two surfers mathematically able to overtake Charles Martin (GLP) with a quarter-final berth. Jeremy Flores (FRA) 25, remains in contention as well and will be one to watch on the season’s grand finale.

Before the final day of the ASP Prime Cascais Billabong Pro, 6 surfers remain in contention for the prestigious Portuguese Waves Series trophy and the added bonus prizemoney of US$50,000. The current overall rankings based on the best two out of three results see Adam Melling (AUS) in the pole position, but any other surfers could scalp the trophy with a win in this event.

Competitors and event organizers will reconvene tomorrow at 7:45am for a potential final day of competition crowning the Cascais Billabong Pro Champion.

Up first when competition recommences will be Bede Durbidge (AUS) against Carlos Munoz (CRI).

The ASP Prime Cascais Billabong Pro is scheduled from October 21-27, 2013 in Cascais, Portugal. For all results, photos, video highlights, press releases and LIVE webcast, log on to aspeurope.com/cascais.

CASCAIS BILLABONG PRO ROUND OF 24 RESULTS: