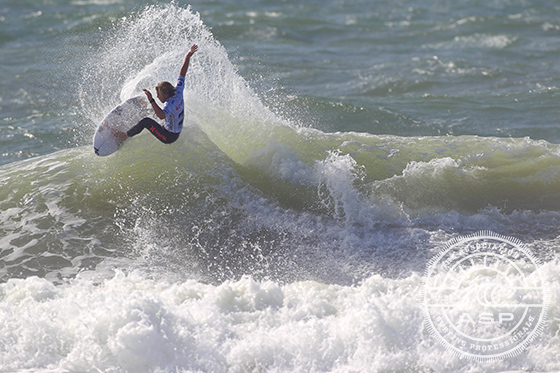 Pictured: Conner Coffin (USA) navigating through a tricky lineup with his sigature flow.

Event No. 6 of 8 on the 2013 ASP Prime Series, the Cascais Billabong Pro is the final stop before the Hawaiian leg and offers crucial ranking points for both WCT surfers seeking to stay in the Top32 and hopeful qualifiers for next years elite tour.

Conner Coffin (USA) 20, took top honors on this first day of competition in Portugal, netting a near-perfect 9.23 to advance ahead of Brazilian fly-boy Gabriel Medina (BRA) 19. The young Californian has been blasting through the ranks since the beginning of the season and could very well attain the top spots of the world rankings by year’s end with a strong finish in the Prime series.

“I freesurfed this morning and I knew it was pretty fun,” Coffin said. “It looks like the perfect storm from the beach but you get out there and there’s some really fun chunks ! My goal coming into this season was just to get to surf the primes so I’m stoked with achieving this already and now it seems with maybe two more big results anything could happen, so I’m just taking it heat by heat.”

Yadin Nicol (AUS) 27, put on a dominant performance in the stormy line-up of praia de Carcavelos, belting the highest heat total of the first round so far, an excellent 16.10 out of 20. Nicol’s situation on both the WCT and World Rankings could potentially see him fall off the elite Top32 wagon and the talented Australian will need big results to cap off a difficult season if he wants to remain amongst the world’s best in 2014.

“I’m stoked on getting through that, I thought I had a couple fives,” Nicol said. “It’s hard to know what’s going on out there, it feels like you’re back in your grom days when they don’t call out the scores. Nothing has really gone right for me all year, so I don’t really care about results right now.”

Maxime Huscenot (FRA) 21, former ASP World Junior Champion, led the European charge into the Cascais Billabong Pro and eliminated current World No.24 Miguel Pupo (BRA) 21, on his way to a second round berth.

“I had a couple bombs where I tried to go too big at the beginning,” Huscenot reflected. “Then I got that wave and did the run around, my dad told me it was a good wave, and paddling back out I heard it was an 8 so I felt a little more relaxed.”

Huscenot benefited from his many years of experience travelling along the Portuguese coastline for Junior events and free-surfing opportunities with local competitors. His impeccable wave selection paired with a display of radical surfing proved sufficient to take the win.

“Nic (Von Rupp) is a really good friend of mine, he invited me twice and we did a little roadtrip all along the coast from north to south,” Huscenot continued. “I really love Portugal, it’s a beautiful country and the waves are amazing !”

Matt Wilkinson (AUS) 25, World No.20 fresh off an excellent 9th place in Peniche, kept his momentum going into his round 1 matchup, advancing ahead of local surfer Nic Von Rupp (PRT). With only minutes on the clock, Wilkinson started on a righthander and displayed his signature power backside turns to scalp an 8.00 point ride and take the win.

“It’s pretty tricky out there, the rip was so strong it felt like I was slowing going down the beach and trying to get back the whole time,” Wilkinson explained. “I’d like to get a big result here and try to go into Hawaii with no pressure, right now I’m inside the bubble so that’s pretty good and I’m only dropping a really low result so anything I get here is going to improve my position.”

Last event of the Portuguese Waves Series, the Cascais Billabong Pro will also crown its overall series winner and offer an extra $50k prizemoney for the best two-of-three results, which Wilkinson could have a shot at with another strong result here at Carcavelos.

“A little bonus $50,000 would be lovely,” Wilkinson continued. “Off course I’d love to take it home, I love it here in Portugal and I’d be pretty pleased if the Portuguese gave me a bonus for sure.”

Charles Martin (GLP) 23, current European No.2, launched his Cascais campaign towards a maiden European title with a solid heat win over WCT surfer Filipe Toledo (BRA) 18, in the opening heat of the morning. Martin netted an excellent 8.33 out of a possible 10 on his very first ride for a combination of powerful turns, one of the highest scores of the event so far.

“I feel pretty good, I made the heat and it was a hard one !” Martin said. “I hurt my ankle yesterday and I was scared I couldn’t surf this morning, but I made it so I’m really happy. I really want to qualify and I have to do good here for that, and doing good here would probably mean winning the European title so I’m going to focus on my surfing and take it heat by heat. There are a lot of good surfers here and the conditions are tough.”

Tomas Fernandes (PRT) 17, local wildcard into this event, capitalized on the opportunity to surf amongst the world’s top surfers, advancing through to the second round in first position ahead of World No. 10 C.J Hobgood (USA) 34.

“I feel amazing, I can’t even describe it !” Fernandes said. “It was great and I hope I can even do better in the next round ! It just shows that nothing’s impossible !”

Surfers and organizers will reconvene tomorrow morning at 7:45am to re-assess conditions for a potential 8am resumption of Round 1.

CASCAIS BILLABONG PRO ROUND OF 96 RESULTS: