Brazilian Storm’ Rages for Round 1 of Oi Rio Pro

The fourth stop on the 2015 Samsung Galaxy WSL Championship Tour, the Oi Rio Pro is the sole Championship Tour event on South American soil and the rising power of Brazil dominated the day’s affairs.

Gabriel Medina (BRA), reigning WSL Champion, rebounded from an uncharacteristic early exit in Margaret River with a hard-fought Round 1 win this morning over Fredrick Patacchia (HAW) and Alejo Muniz (BRA). The young Brazilian drew a crowd of hundreds on the beach cheering for him as he advanced directly into Round 3.

“I’m feeling good to get that one,” said Medina. “The waves are kinda hard but I got that 7 and a 5 I think and the heat was pretty slow after that. Alejo (Muniz) and Freddy (Patacchia) couldn’t get another score so I was lucky to get through. I cope pretty well with pressure and it’s good to have people cheering for you. It’s a lot of people but I’m here at home so there’s no reason to feel pressure.”

Following Medina’s heat, the crowd reached a fever pitch for current frontrunner on the Jeep Leaderboard Adriano de Souza (BRA). De Souza, a former event winner, exhibited an impressive command of the lineup netting a 17.90 out of a possible 20 to advance directly through to Round 3.

“There’s a lot of pressure for me right now so it’s difficult,” said De Souza. “I have to remember that the contest has just started and there’s a lot of people that have come out to watch. My strategy out there was to win my first Round 1 heat of the year and I can’t pick a better spot than here to do this. I’m really proud of myself for making my first heat and I want to keep the momentum alive going into the next Round. The Margaret River contest was so special for me, I really wanted to win an event this year and I did.”

The “Brazilian Storm” had a sensational outing in Round 1 with Filipe Toledo (BRA), Wiggolly Dantas (BRA), Italo Ferreira (BRA) and Jadson Andre (BRA) all winning through their opening heats to advance directly to Round 3.

Kelly Slater (USA), 11-time World Champion and current WSL No. 9, was in unparalleled rhythm in the shifting beachbreaks, threading barrels on both his forehand and backhand to collect the day’s high heat total of a 19.27 out of a possible 20.

“It was a good start and it was a lot of fun,” Slater said. “I feel good, the waves are super fun and I watched for about an hour this morning from my hotel to try and line up where I’d sit. I felt really calm out there and in waves like that you just trust your instincts.” 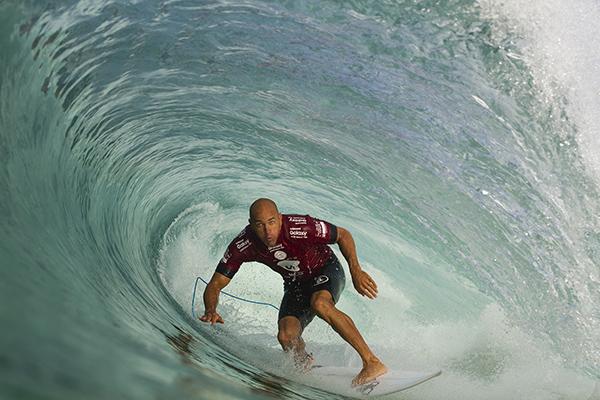 The round was punctuated by impressive showings from Australians Bede Durbidge (AUS) and Matt Wilkinson (AUS), both taking heat wins to advance directly into Round 3.

Following the completion of men’s Round 1, the world’s best female surfers hit the water for Round 1 of the Oi Rio Women’s Pro.

Looking strong on her forehand Bianca Buitendag (ZAF) posted a heat total of 12.00 (out of a possible 20) to dispatch Lakey Peterson (USA) and Alessa Quizon (HAW) and earn her place in Round 3.

“I’ve been watching the boys since this morning and they seem to have been struggling,” Buitendag said. “I expected it to be tough when I paddled out so I was prepared for those conditions.”

Defending two-time event winner Sally Fitzgibbons (AUS) looked confident out in the tricky lineup and quickly claimed a seven-point ride, the highest score of the heat, to take the win over her opponents Johanne Defay (FRA) and Laura Enever (AUS).

“I love coming here, it’s been kind to me over the years and I’ve had some good results,” Fitzgibbons said. “I’m chasing that winning feeling again. It was very tricky out there in that heat though, but I’ll take the win.”

Injury wildcard Keely Andrew (AUS) came out firing in her Round 1 heat against current WSL No. 4 Tyler Wright (AUS) and Coco Ho (HAW), posting a solid 6.50 on her opening ride. Andrew was able to hold onto her lead with a modest back-up score and takes the win in the second CT appearance of her career.

“Steph (Gilmore) is one of my favorite surfers so to get this opportunity to surf for her is pretty amazing,” said Andrew. “I just want to make the most of this event, do as well as I can and make as many heats as possible. Making the Quarters would be an absolute dream.”

Americans Courtney Conlogue (USA) and Sage Erickson (USA) were neck-and-neck through their Round 1 heat, but fresh from a win in Margaret River the World No. 2 found a 6.50 in the final moments to take the win. Brazilian Silvana Lima (BRA) struggled to find any scores of consequence, posting only 3.13, and will surf again in Round 2.

“The conditions right now are so tough,” said Conlogue. “I was really happy to get through that first Round because sudden-death Round 2 is going to be hard, there’s so many great athletes. I’m really looking forward to Round 3.” 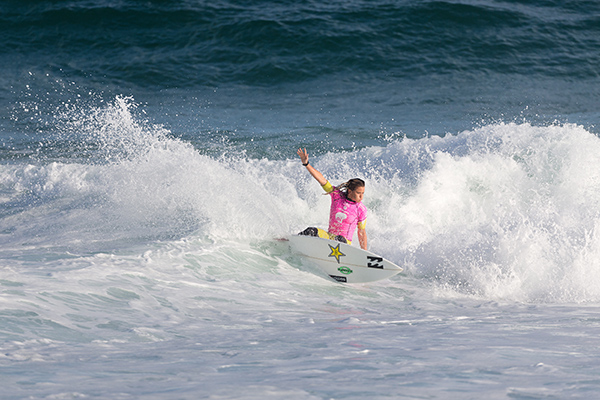 Courtney Conlogue (USA) posts the highest heat total of Round 1 of the Oi Women’s Rio Pro.

The Oi Rio Pro will be webcast LIVE at WorldSurfLeague.com

The world’s best surfing will also be broadcast LIVE on Fox Sports in Australia, MCS Extreme in France, EDGE Sports in China, South Korea, Malaysia and other territories and on Globo TV  in Brazil.