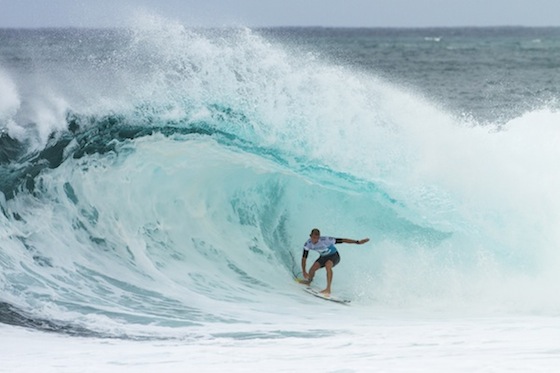 PIPELINE, Oahu/Hawaii (Thursday, December 5, 2013) – The 2013 ASP World Championship Tour (WCT) is nearing a close and the final event of 2013, the Billabong Pipe Masters in Memory of Andy Irons, will see a showdown for the ASP World Title between Mick Fanning (AUS), 32, and Kelly Slater (USA), 41. In addition to the battle for the throne, Pipeline will also determine the final qualification slots for the elite 2014 ASP World Championship Tour.

Entering the Billabong Pipe Masters, Fanning holds a commanding lead on a potential third ASP World Title. In order for Slater to surpass Fanning for an unprecedented 12th crown, he must win the event. Nothing less than a victory for Slater will see him pass Fanning on the rankings. If Slater does run the road to victory at Pipeline, Fanning must finish 3rd or better to claim the title for himself.

While this year’s battle for the crown is now between two contenders, several surfers’ qualification hopes for next season’s elite hang in the balance of a performance at Pipeline. There are currently five surfers to watch sitting outside of the bubble for 2014 qualification who are all possibilities of securing a Top 34 berth for next season pending their result at the Billabong Pipe Masters. The list includes Miguel Pupo (BRA), 22, Patrick Gudauskas (USA), 28, Damien Hobgood (USA), 34, Dusty Payne (HAW), 24, and Yadin Nicol (AUS), 27. All of these surfers could qualify through either the ASP WCT or the ASP World Ranking and their minimum results needed could change depending on surfers in the Top 22 on the ASP WCT or Top 10 on the ASP World Ranking. Currently, the minimum cutoff for the ASP WCT is 14,750 points. It is important to note that these scenarios rely on surfers who are currently holding a requalification spot making no changes in their ASP WCT or World Ranking.

Miguel Pupo (BRA), 22, No. 24 on the ASP WCT, currently needs a 13th place to meet the current minimum cutoff.

Patrick Gudauskas (USA), 28, current No. 27 on the ASP WCT, needs a Quarterfinals result to finish within the ASP Top 22, while a 9th could qualify him through the World Ranking.

Damien Hobgood (USA), 34, No. 28 on the ASP WCT, currently needs a 5th or better to qualify in the Top 22, but a 9th or better could qualify him through the World Ranking.

Dusty Payne (HAW), 24, currently No 34 on the ASP WCT, who suffered an injury plagued season, could still qualify on the ASP WCT, but needs to win the Billabong Pipe Masters to do so. Payne could qualify through the ASP World Ranking, but currently needs a minimum 9th place result.

Yadin Nicol (AUS), 28, current ASP World No. 32, could qualify via a 2nd place finish or better at the Billabong Pipe Masters.

Please note that these temporary results are based off of one surfer’s minimum results with no additional shift in the rankings.

When competition commences, up first will be Patrick Gudauskas (USA), 28, and Ezekiel Lau (HAW), 20, in the opening heat of competition.

Surfline, official forecasters for the Billabong Pipe Masters, have called for:

A fun size run of NW swell will show over the next few days, with a bigger NNW swell lining up for the weekend and early next week.

The Billabong Pipe Masters will be webcast LIVE via vanstriplecrownofsurfing.com