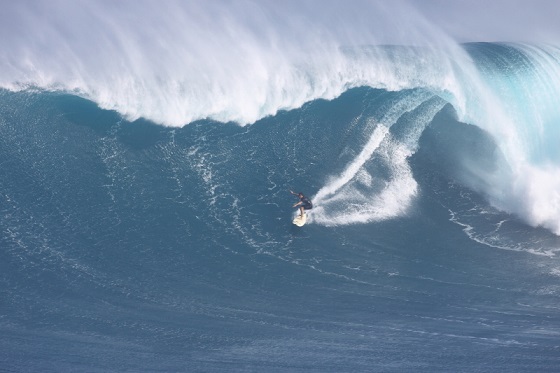 LOS ANGELES, California/USA (Tuesday, October 15, 2014) – The world’s best big wave surfers are back on call today as the ASP commences the second half of the 2014/2015 Big Wave World Tour (BWWT) season. With a window running from October 15, 2014 to February 28, 2015, the second half of the ASP BWWT season focuses on the Northern Hemisphere swell cycle with the potential of running three world-class events at some of the most dangerous locations on the planet.

“We’re excited to get the Northern Hemisphere season under way,” said ASP Big Wave Commissioner, Peter Mel. “We’ve seen a unique weather pattern over the summer, which bodes well for an active upcoming season. All the signs are there so we’re very hopeful.”

The Todos Santos Challenge in Mexico, the Punta Galea Challenge in the Basque Country, Spain and the Pe’ahi Challenge in Maui, Hawaii comprise the Northern Hemisphere half of the 2014/2015 BWWT season. An expert meteorological team from Surfline.com will track swell systems daily from around the world, searching for conditions that will produce waves of 25 feet or bigger.

“The Northern Hemisphere season has finally arrived and anticipation is high,” said ASP BWWT Vice President Gary Linden. “The green light will go to the first one of the three events to deliver the required 25 foot plus waves”.

“Punta Galea has been very consistent two years in a row, while we have not run an event at Todos Santos for four years. I’m confident that Punta Galea will continue its great run and hopeful that this will be the year Todos Santos delivers. To round out the season with a never before seen paddle-in event at Pe’ahi, Maui is the goal of a lifetime. Let the storms begin!”

Should the Pe’ahi Challenge run this season it will be the first ever paddle-in event at the renowned big-wave break. The BWWT team will be watching for big winter storms pushing through the Western portion of the North Pacific and light winds from the South to create the ideal conditions for the event to be called on.

Sixty miles south of the US border and nine miles off the coast of Mexico lies Killers, the venue for the Todos Santos Challenge. Drawing off the energy of the Pacific Northwest, the right swell from the Gulf of Alaska could see the contest run this season.

Although fairly new to the schedule, Punta Galea delivered some of the best rides seen on last year’s BWWT. The North Atlantic is already experiencing significant swell activity and with the right direction future swells could produce the 25 foot plus waves needed for the contest to happen.

The Southern Hemisphere season ran from April 15 to August 31, 2014 with scheduled events in Chile, Peru and South Africa. The Billabong Pico Alto was the only event to experience the required wave size and took place on Thursday, July 3, 2014 in 40-foot waves where Makua Rothman (HAW) claimed his maiden ASP BWWT victory. With one event completed this season, the Hawaiian sits atop the BWWT rankings heading into the Northern Hemisphere season.

The $100,000 combined prize money from the Dungeons Challenge and the Quiksilver Ceremonial has been rolled over to the upcoming contests. Both the Punta Galea Challenge and the Todos Santos Challenge have been upgraded to $75,000 prize purses and the Pe’ahi Challenge prize money has been pushed up to $100,000. Should any of the three remaining BWWT events not be held the prize money will be distributed among the Top 10 finishers at the end of the 2014/2015 season.

The 24-man fields for the Northern Hemisphere events are comprised of the Top 12 seeded ASP BWWT surfers plus six ASP BWWT Wildcards and six Local Wildcards.

The ASP BWWT events will be webcast LIVE at ASPWorldTour.com