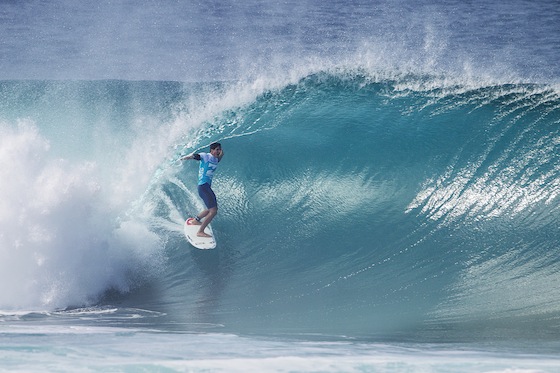 PIPELINE, Oahu/Hawaii (Sunday, December 8, 2013) – The opening day of the Billabong Pipe Masters, in Memory of Andy Irons, commenced today in firing six-to-eight foot (2 metre) waves and the world’s best surfers put on an incredible display of technical barrel riding at Pipeline and Backdoor to complete Rounds 1 and 2. The Billabong Pipe Masters is the third and final leg of the Vans Triple Crown of Surfing, hydrated by vitaminwater.

The final stop on the ASP World Championship Tour (WCT), the Billabong Pipe Masters will decide the 2013 ASP World Title Race, the coveted Vans Triple Crown of Surfing Champion and the final qualification slots for next season’s Top 34.

Gabriel Medina (BRA), 19, would put together an amazing show at the iconic lefts of Pipeline to kick off the Billabong Pipe Masters, navigating through a heavy barrel on his opening score to post a near-perfect 9.67. The Brazilian Prodigy would quickly back up the ride, earning an additional 9 point score for another deep Pipe tube punctuated with a massive alley-oop, eliminating Bruce Irons (HAW), 34. Medina’s unlikely aerial at Pipeline puts him in the running for a 250,000 mile prize from Hawaiian Airlines Airshow award.

“I got a little bit lucky,” Medina said. “I got three really good barrels and did the air at the end. I was watching the guys always getting big scores at backdoor and had them in my mind. Somehow, I found those lefts and that was such a fun heat. I’ve always watched Bruce (Irons) and I really respect him. To be surfing with him is a dream come true.”

Medina will face off against John John Florence (HAW), 20, in Heat 5 Round 3 of the Billabong Pipe Masters.

“It was a dream start to the event,” Zietz said. “I got one little Pipe wave, paddled back out and it was nice having Ryan (Callinan) instead of one of the Hawaii boys. He let me pick apart the first half of that heat. He didn’t try and battle me too much. Bruce (Irons) looked at that wave and I don’t know what he was thinking. He probably should have gone because he probably could have got a 10 easily on it. I just dropped in and the foam-ball hit me and I was on one foot for a second. I put my foot down and was going the perfect speed to get barreled all the way through. That was just a perfect wave.”

Mitch Crews (AUS), 23, qualifier for the 2014 ASP WCT, was responsible for one of the day’s biggest upsets, eliminating big wave charger and former WCT veteran Shane Dorian (HAW), 41, in Round 1. Crews would continue his successful Billabong Pipe Masters campaign in Round 2, topping fellow countryman Matt Wilkinson (AUS), 25, to claim his second heat win of the day.

“This Hawaii season’s one of the best I’ve ever had,” Crews said. “This has been an incredible run and that heat was a great time. I saw the heat draw and knew I’d draw someone from Hawaii who was incredible. Shane Dorian, he’s the guy. I saw him the other day and was star struck. I decided I was going to try and just get a few waves at backdoor. I never usually even get waves out here, so I’m really happy.”

Crews will face off against 11-time ASP World Champion Kelly Slater (USA), 41, in Heat 9 of Round 3.

Jeremy Flores (FRA), 25, 2010 Billabong Pipe Masters Champion, was electric in the offshore barrels in his afternoon heat. Flores would drive through Pipeline and Backdoor barrels to earn one of the day’s high heat-totals, topping dangerous wildcard Tanner Gudauskas (USA), 25, while advancing to Round 3.

“The waves started to get better and I saw the wind switching and saw those perfect A frames,” Flores said. “I was pretty stressed because I was frothing so hard and thought I might take off on too many waves. I think it’s only going to get better from now on, hollow barrels, and it’s good for everyone. It’s Pipe. It’s a dream.”

Event organizers will reconvene tomorrow morning at 6:30am local time for a possible 8am start.

The Billabong Pipe Masters in Memory of Andy Irons holds a waiting period from December 8 – 20, 2013 and is webcast LIVE via triplecrownofsurfing.com

Surfline, official forecasters for the Vans Triple Crown of Surfing, are calling for:
Overlapping NNW swells prevail Sunday through Tuesday with good size surf at Pipe. Wind is light Sunday and Monday, with trades rebuilding by Tuesday.