The day’s opening heat saw three-time Rip Curl Pro Bells Beach Champion, Mick Fanning (AUS), come up against trials winner Joe Van Dijk (AUS). The three-time World Champion kept busy, using his experience to post a heat total of 11.00 (out of a possible 20). Van Dijk fought until the end but it wasn’t enough he is now eliminated from the competition in equal 25th place.

“I did a camp earlier in the year and Joe (Van Dijk) was on it and he was one of the kids that really impressed us,” Fanning said. “With wildcards you never know what’s going to happen. You just have to go out there and put a game plan together and try and get moving and get your confidence up”.

After a third-place finish on the Gold Coast, Adriano De Souza (BRA) was determined to overcome 2001 World Champion C.J. Hobgood (USA) in elimination Round 2. The Floridian was in control through most of the heat until, with less than three minutes remaining, former Bells winner De Souza posted a heat high 8.67 to take the win, move into Round 3 and eliminate Hobgood from the competition.

“It’s tough when you know you’re surfing well and the score doesn’t show up, it’s so frustrating”, De Souza said. “I had so many questions in my mind, maybe it was my board, maybe it’s me, but right at the end I think it all came together and I made the scores. I’m happy to make it through”.

2007 Bells winner Taj Burrow (AUS) found himself in unfamiliar territory, surfing in elimination Round 2 against tour rookie Ricardo Christie (NZL). Christie registered a solid heat total of 15.27 but it wasn’t enough. Burrow posted a near- perfect 9.50 (out of a possible 10) to move into Round 3 while Christie leaves the competition in equal 25th place.

“It’s good to catch a wave on The Bowl,” Burrow said. “That’s what we are here for. It was a tough heat, Ricardo (Christie) surfs so well and is such a good guy. I hope he stays on Tour so I can see him open up on some of these waves”.

Ratings leader Filipe Toledo (BRA) came up against Hawaiian powerhouse Dusty Payne (HAW) in one of most anticipated heats of Round 2 and the pair did not disappoint. Going blow for blow, Toledo and Payne displayed a mixture of powerful rail surfing and the innovative aerial flair both surfers are known for. In the end Toledo took the win landing a huge full rotation air on the way to posting a near-perfect 9.17 and moves through to the next round.

“Starting the year with a win was really special,” Toledo said. “I feel really confident and I got here with the best feeling. When I lost my first heat it was hard, but to make that heat, I feel good and am ready for Round 3.”

The opening two heats of Women’s non-elimination Round 3 saw Sally Fitzgibbons (AUS) and Carissa Moore (HAW) win through their heats to earn a place directly through to the Quarterfinals. Their opponents will surf again in Round 4 for another chance to advance.

Fitzgibbons, Lakey Peterson (USA) and Alessa Quizon (HAW) battled for a the Quarterfinal berth in the first heat of Women’s Round 3. Quizon, who had previously eliminated Malia Manuel (HAW) in Round 2, was slow to get on the board while Peterson and Fitzgibbons fought for the lead. In the end it was the Australian who won through, edging the win over the American by just 0.13.

“Myself and Lakey have had great battles out here over the years,” said Fitzgibbons. “That was a real chess match and I knew I had to have patience to win that heat.”

Defending back-to-back event winner Carissa Moore (HAW) showed impressive form against Silvana Lima (BRA) and Johanne Defay (FRA). The two-time World Champion had the field in a combination situation with an excellent 18.50 heat total, delivering both the highest single-wave score, a 9.67, and two-wave heat total of the day. Lima, who will surf again in Round 4, previously eliminated Nikki Van Dijk (AUS) after a strong Round 2 performance.

“I’m just working on keeping myself in a happy place this year,” said Moore. “I don’t feel like I did my best surfing in that heat but I’m so stoked to make it through.”

Earlier in the day Courtney Conlogue (USA) fought to avoid an early exit against Sage Erickson (USA) in their Round 2 match-up. An in-form Conlogue posted a near-perfect 9.60 for a wave at Rincon to take the win and keep her in the competition.

“I actually kept my board from last year and pulled it out for this year,” said Conlogue. “I want to ring that Bell so bad. I don’t think anyone wants to ring it as bad as I do. Last year having to pull out and not getting the chance to see it through was really difficult. I want to give it all I’ve got and see where it goes.” 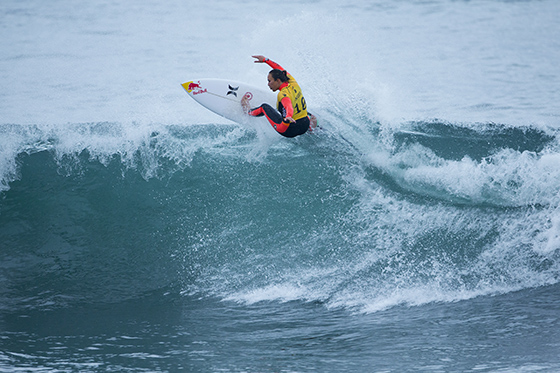 Caption: Carissa Moore (HAW) storms through to the Quarterfinals after a dominant Round 3 performance.
Image: WSL / Kelly Cestari