Barrels and High Drama for Oi Rio Pro Elimination Round 2

BARRA DA TIJUCA, Rio de Janeiro/Brazil (Thursday, May 14, 2015) – The world’s best surfers battled to avoid an early exit from the Oi Rio Pro today as elimination Round 2 was completed in solid six-to-eight foot (2 – 2.5 metre) waves at Barra da Tijuca. The day saw top seeds win through the morning, with big performances and upsets dominating the afternoon as the rookies came back strong to eliminate several big names.

The fourth stop on the 2015 Samsung Galaxy WSL Championship Tour, the Oi Rio Pro, is the sole Championship Tour event on South American soil, but in a departure from their Round 1 dominance, Round 2 witnessed all four Brazilians competing today eliminated.

Three-time world champion Mick Fanning (AUS) defeated David do Carmo (BRA) in the opening heat of the day with the highest two-wave heat total of Round 2, 16.63 out of a possible 20. The win sees Fanning get one back over the wildcard who eliminated him in Rio last year in Round 2.

“I was watching the water before my heat and talking to a few people to work out where to get the best waves,” said Fanning. “You have to let previous losses go but at the same time there’s a little bit of you that wants to get him back. Once you’re out there it’s really a lucky dip. I really tried to put some scores on the board early.”

Hawaiian charger John John Florence (HAW) got the better of wildcard Alex Ribeiro (BRA) in their Round 2 match-up thanks to a 14.84 heat score. The Brazilian is eliminated from the contest in equal 25th place and Florence heads to Round 2 where he will face Adam Melling (AUS).

“I just couldn’t find a wave the whole heat,” Florence said. “I kept paddling but you can’t find it when you’re out there. It was mind games the whole time but I got lucky with that last wave. It was actually scary because I had to airdrop, it was like Tahiti or something. It’s crazy here, there are just so many people and everyone is stoked on surfing.”

Ricardo Christie (NZL) caused the first upset of the day by eliminating higher seed and former event winner Jordy Smith (ZAF) from the competition. The South African dominated through much of the heat but the rookie came back with an excellent 9.17 for a righthand tube to claim his second CT heat win and advance to Round 3.

“I’ve been watching all day to see where the good waves have been breaking,” said Christie. “The rip is so gnarly out there though and can really change things up. I actually got my good wave exactly where I’d been watching, which was neat. Every event I feel stronger and stronger and more comfortable at the event. I’m making some friends and learning so much from the top guys. It’s a really cool experience and great to get some momentum.” 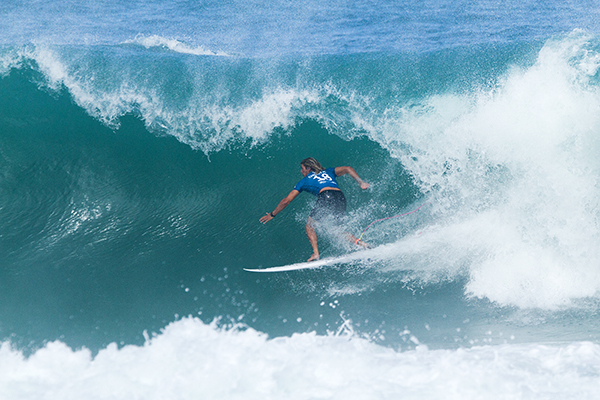 Keanu Asing (HAW) became the second rookie to cause an upset today when he narrowly defeated Joel Parkinson (AUS), who is eliminated from the event and takes home his worst CT result since 2011. The Round 2 victory is Asing’s second heat win of the year and will see him move to the next round of competition where he will take on reigning WSL Champion Gabriel Medina (BRA).

“It was a tough heat,” said Asing. “When you see everyone else struggling you know it’s going to be difficult. I’m just glad to get through that heat and focus on a better performance next time. I did the best I could with what I have and you have to overcome and adapt to get through these heats.”

The Oi Rio Pro will be webcast LIVE at WorldSurfLeague.com

The world’s best surfing will also be broadcast LIVE on Fox Sports in Australia, MCS Extreme in France, EDGE Sports in China, South Korea, Malaysia and other territories and on Globo TV  in Brazil.