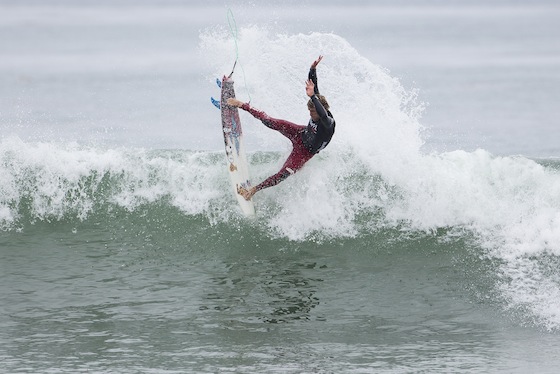 LOWER TRESTLES, San Clemente, CA (Tuesday, September 17, 2013) – The 2013 Hurley Pro at Trestles, stop No. 7 of 10 on the ASP World Championship Tour (WCT), returned to competition for the third consecutive day, completing Rounds 3 and 4 of competition in clean one-to-three foot (1 metre) surf at Lower Trestles. While the ASP Top 34 battled smaller surf today, there was no shortage of drama, with massive upsets and standout performances from the world’s best surfers.

“It was definitely going to be a tough heat,” Smith said. “Brett (Simpson), he’s from Huntington, born and raised and he’s not afraid to grovel and knows how to surf a small wave. You’ve got to really choose your waves properly and I made one mistake on a left earlier in that heat and allowed for him to start with a 7. I’m just glad to make that heat because these aren’t exactly my conditions out there, but I’m making the most of it. I have an incredible board under my feet and it’s the same one that I rode in the US Open. It went really well in small waves, so I’m pumped.”

Smith, current No. 4 on the ASP WCT, admitted that his victory over Simpson marked a crucial result towards his 2013 ASP World Title campaign and is looking at the Hurley Pro at Trestles as a momentum builder for the remainder of the season.

“I think this contest for me will tell whether I’m in the race or not,” Smith said. “For me, I just really want to enjoy these next few events. I want to try and compete as hard as I can and have a lot of fun with it. Win, lose or draw, it doesn’t matter. I just want to have a lot of fun with it and I’m enjoying my surfing at the moment and that’s probably why I’m enjoying everything so much. I love Trestles, love America and and I’m just stoked to be here.”

Smith’s success at the Hurley Pro at Trestles would continue when he advanced directly to the Quarterfinals over C.J. Hobgood (USA), 34, and Taj Burrow (AUS), 35, in their Round 4 affair.

“I knew I had to play a smart game plan and I also just went for broke,” Gudauskas said. “To win that heat, I’m stoked because this result will really help my requalification chances. It’s so epic to have my friends down on the beach and thanks to everyone in San Clemente for coming down and watching.”

Gudauskas would continue to dominate his local lineup, besting Kai Otton (AUS), 33, and Adriano de Souza (BRA), 26, in Round 4, advancing directly to the Quarterfinals.

Kelly Slater, who entered the Hurley Pro at Trestles in the No. 1 position while hunting a 12th ASP World Title, was gracious in defeat following his loss to Gudauskas, but admitted the Round 3 loss was a serious blow towards his ASP World Title campaign.

“I’m happy for Pat (Gudauskas),” Slater said. “He’s a great surfer and he’s been on the losing end of several close heats and it’s about time something went his way, but this result is a bummer. This is three bad results for me this year and I don’t have much room to move.”

Following the elimination of Slater, two-time ASP World Champion Mick Fanning (AUS), 32, took out a crucial heat victory over Alejo Muniz (BRA), 23, temporarily sliding Fanning to No. 1 over Slater on the rankings.

“I was really nervous knowing the significance of that happening (Kelly’s loss),” Fanning said. “You do the best you can and I had a great heat with Alejo (Muniz). He’s surfed amazing these last few months and it was nerve-wracking in that heat. Getting through this round, you get another three-man heat and it’s a good time to get re-adjusted and focus on what’s next.”

Mick Fanning was relegated to Round 5 by an on-fire Michel Bourez (PYF), 27, in Round 4 and will face off against Travis Logie (ZAF) 34, in Heat 3 when competition resumes.

Adam Melling (AUS), 28, would contribute to the day’s upsets, defeating reigning ASP World Champion Joel Parkinson (AUS), 32. Wave choice proved to be crucial in their bout and Melling would unload the heat’s high wave score of 8.50 for a series of polished forehand turns to secure an important heat win towards his 2014 requalification campaign.

“I waited for about 10 minutes and Joel (Parkinson) got one straight up,” Melling said. “I wanted to have his strategy, but I knew there were better waves than the one he got so I waited and it paid off. It feels good to beat Joel and I need the points. Coming up against Joel, you can get rattled because he’s the world champ, but I just took it as a board riders competition and had a bit of fun with it.”

While there were several early exits from ASP WCT top seeds, day three of the Hurley Pro at Trestles saw some incredible high-performance battles from the rest of the ASP Top 34.

Julian Wilson (AUS), 24, got the best of an action packed heat against Filipe Toledo (BRA), 18, with the two delivering an exciting series of backhand aerial exchanges on the Lowers lefts. Wilson was in need of an excellent score in the dying minutes of the heat and launched a massive backhand rotation followed with a snap for a 9.10 and a Round 4 berth.

“when I saw the heat draw, I felt like that was the hardest draw I could have today because of the conditions,” Wilson said. “At the same time, I want to be the best, I want to beat the best guys, and Filipe (Toledo) is so strong in those conditions. I knew it was going to take a lot. I just couldn’t get anything going on the rights and looked to the lefts and was able to get a bit of rhythm going and build some scores. I was really happy to win that heat and Filipe put up a really good challenge. I got that score I was chasing the whole heat to get in front of him at the end and I just didn’t give up.”

Wilson would build on his Round 3 performance, launching an incredible aerial attack on the Lowers rights in his Round 4 bout. The Australian natural-footer would post the day’s highest scores, punting a massive air-reverse for a 9.20 followed by an additional 9.87 for a full-rotation air. Wilson’s near-perfect 19.07 heat total marks the highest of the 2013 Hurley Pro at Trestles competition and would advance him directly to the Quarterfinals.

Michel Bourez built momentum throughout the day, taking a Round 3 win before dominating his Round 4 match-up over Mick Fanning and Josh Kerr (AUS), 29. Bourez would deliver some of the day’s highest scores including a near-perfect 9.57 out of 10 for a series of ferocious backhand turns on a steep Lowers left while securing a Quarterfinals berth.

“Mick (Fanning) is really heavy to have in a heat,” Bourez said. “I knew I had to do my job and I caught a few lefts to see what I’d get. At first I got that 7.70 and then I got the 9.50, so I thought, wow, that works! Skipping that Round 5 is the best and when you lose in Round 4, having to surf in Round 5 adds more pressure. Especially on the last day, you need to save your energy.”

Event organizers will reconvene tomorrow morning at 7:30am local time for a possible 8am start to Hurley Pro at Trestles Round 5 competition.

The Hurley Pro at Trestles holds a waiting period from September 15 through 21, 2013 and is webcast LIVE via www.thehurleypro.com