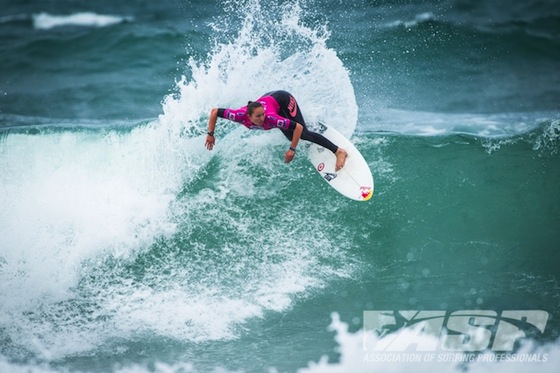 The Roxy Pro France, Event No. 7 of 8 on the 2013 ASP Women’s WCT, was initially scheduled for July in Biarritz. However, poor conditions forced the rescheduling of the event and Roxy and the ASP’s commitment to putting the world’s best surfers in the world’s best waves will see the ASP Top 17 competing in Hossegor from September 24 – 30, 2013.

Moore, the 2011 ASP Women’s World Champion, has been incredibly consistent this season, posting wins at the Drug Aware Pro Margaret River, the Rip Curl Pro Bells Beach and most recently the Vans US Open of Surfing, leaving her in to the No. 1 position over current No. 2 Tyler Wright (AUS), 19, by a narrow lead. The Hawaiian talent could potentially secure a second elite crown in France, but will need to win the event as well as have Wright fail to reach the Semifinals.

Wright has had a breakthrough season of her own amongst the ASP Top 17, posting wins at the season-opening Roxy Pro Gold Coast and Colgate Plax Girls Rio Pro while holding the current No. 1 position at several stages throughout the season. With Wright trailing Moore by just 1,700 points heading in to Hossegor, she is well within striking distance of her first ASP Women’s World Title this season.

Courtney Conlogue (USA), 21, has had an incredible campaign amongst the world’s best as the 2013 ASP Women’s WCT season has progressed, vaulting to a career-high No. 3 on the current rankings via an emphatic victory in New Zealand and a recent Final at the Vans US Open of Surfing. Conlogue now sits 8,100 points behind Moore entering the Roxy Pro, making her the first American ASP Women’s World Title contender since four-time champion Lisa Andersen.

The Roxy Pro France holds a waiting period from September 24 through 30, 2013 and will be webcast LIVE via  http://roxylive.com/roxyprobiarritz/2013/